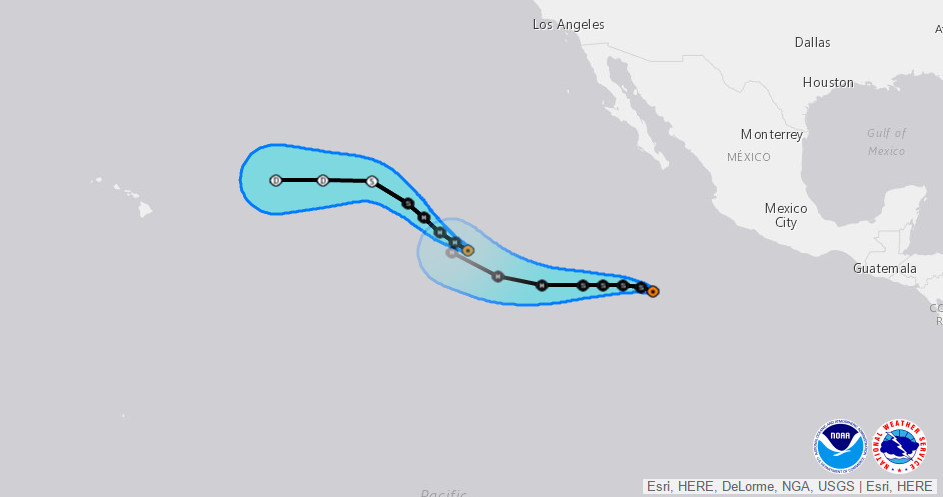 HAWAII (BIVN) - Major Hurricane Blas and Tropical Depression FOUR-E, expected to become a hurricane, are not expected to be much of an impact to Hawaii this far out, but could generate advisory level surf.

HAWAII – The quiet start to the 2016 Pacific hurricane season appears to be over, as weather forecasters are tracking two storms in the Eastern North Pacific.

Hurricane Blas is 1,945 miles west southwest of the southern tip of Baja California and moving west northwest. Blas is a major hurricane with winds measured at 120 mph, although recent satellite imagery indicates that Blas is beginning to weaken.

Meanwhile, Tropical Depression Four-E is following behind Blas, and is expected to become a hurricane in 96 hours.

Neither storm poses much of a threat to Hawaii. There are no coastal watches or warnings in effect. There could be some advisory level surf generated along Hawaii shores as a result.

According to the National Weather Service, Hurricane Blas is expected to continue moving west-northwestward today, but should turn northwestward on Friday into colder, less favorable conditions. “After Blas weakens and becomes a shallower system,” forecasters say, “the ECMWF takes the cyclone west-southwestward while the remainder of the guidance shows a more westward track,” towards the islands, by this time reduced to a tropical depression. However, “the NHC forecast favors the latter scenario and remains north of the ECMWF solution at days 4 and 5,” the NWS reports.

Behind Blas, Tropical Depression FOUR-E is moving west northwest at 8 miles per hour. Most models agree on the direction FOUR-E will take, but as for the intensity, forecasters say the key concern is the cold wake left behind by Hurricane Blas. “Based on the latest available daily global SST analyses, the waters ahead of the depression have cooled to 26.5 degrees Celsius or colder,” the National Weather Service says. “The official forecast track for the depression intersects and remains very close to Blas’s track during the next 5 days, which would keep it over these colder-than-normal waters for a significant amount of time. Since the SHIPS guidance utilizes a weekly SST analysis, which is showing ocean surface temperatures about 2 degrees too warm, confidence in its output is somewhat low at the moment. Vertical shear and environmental moisture values appear conducive for strengthening, so the NHC official intensity forecast still shows intensification, but at a slower rate than indicated by many of the intensity models. The updated forecast is also a little lower than the previous one, especially through 48 hours.”