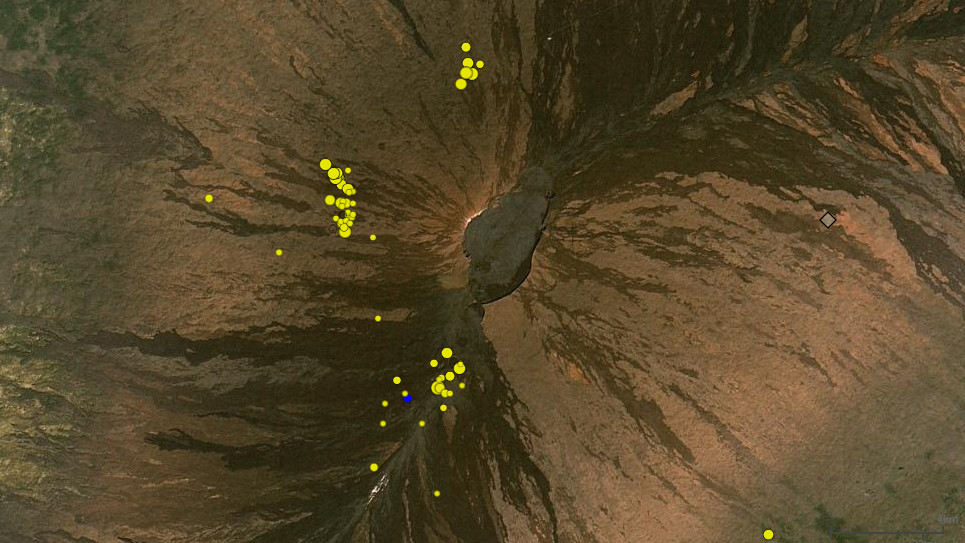 MAUNA LOA (BIVN) - The short bursts of earthquakes, recorded at depths of about 3 to 7 miles beneath the upper west and north flanks of the volcano, have been recorded before, USGS Hawaiian Volcano Observatory scientists say.

USGS Hawaiian Volcano Observatory seismometers recorded “short bursts of earthquakes at depths of about 3 to 7 miles beneath the upper west and north flanks of the volcano.”

The quakes can were visible on the USGS interactive map on the HVO’s Recent Earthquakes in Hawaii page. A screen grab can be seen above. The yellow dots represent quake locations.

“Such activity has been detected before,” scientists wrote in a weekly update, “and is likely a response of the volcano to stresses related to slow accumulation of magma in the summit and upper Southwest Rift Zone magma storage complex.”

USGS says the ongoing addition of magma to this region is supported by ground surface deformation (inflation) measured by Global Positioning System (GPS) instrumentation across the volcano, as well as by satellite radar (InSAR).

Mauna Loa is not erupting. The USGS alert level for the 13,681 ft. volcano is currently “ADVISORY”.

Mauna Loa has erupted 33 times since its first well-documented historical eruption in 1843. Its most recent eruption was in 1984.