Hawaii On Tropical Storm Watch, Darby Could Be Direct Hit

HAWAII ISLAND (BIVN) - A Flash Flood Watch and High Surf Warning will also soon be in effect, as the latest track shows Darby could plow over the Big Island with winds as high as 65 mph. 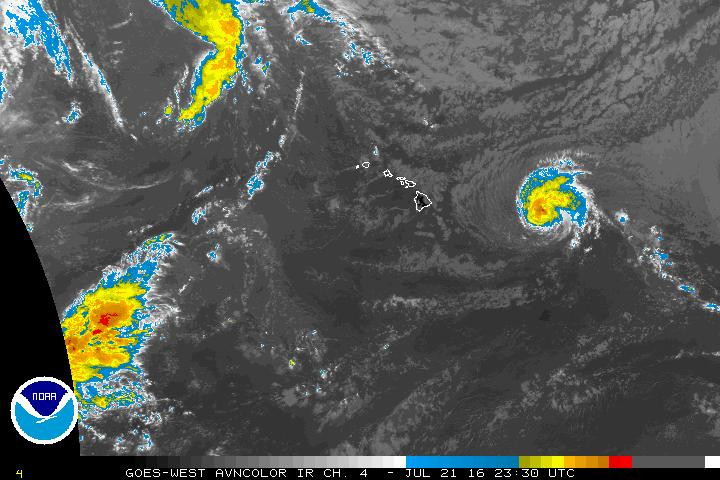 HAWAII ISLAND – A Tropical Storm Watch has been issued for Hawaii County and Maui County.

As of 2 p.m. HST, Tropical Storm Darby was 540 miles east of Hilo and moving west at 14 mph. Darby has not weakened, and continues to sustain winds near 65 mph with higher gusts. Little change in strength is forecast during the next 48 hours. As Darby moves towards Hawaii Island, some decrease in forward speed is expected late Friday into Saturday, weather forecasters say.

On the forecast track, the center of Darby will pass very close to, or over, the Big Island on Saturday. Tropical storm-force winds extend outward up to 105 miles from the center. The estimated minimum central pressure is 998 mb (29.47 inches).

A high surf advisory for east facing shores will go into effect at 6 p.m. tonight. A high surf warning will be issued beginning 6 a.m. tomorrow through Sunday. 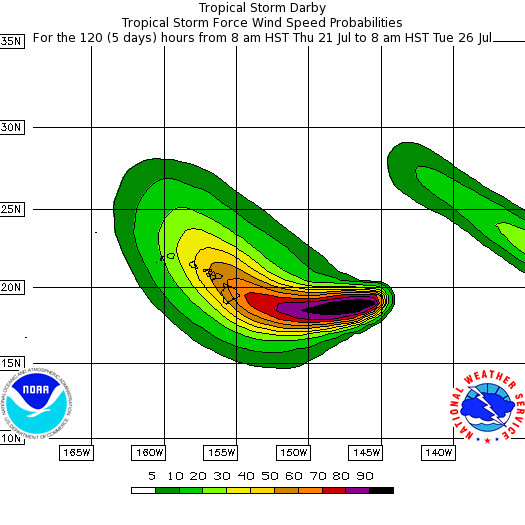 A high surf advisory for east facing shores will go into effect at 6 p.m. tonight. A high surf warning will be issued beginning 6 a.m. tomorrow through Sunday.

Surf will build today and tonight on east facing shores, reaching 12 to 20 feet on Friday with occasional higher sets.

Impacts could be very high, and forecasters say we can “expect ocean water surging and sweeping across beaches, coastal benches, and lava flows creating the potential for impacts to coastal properties and infrastructure including roadways. Powerful longshore and rip currents will be present at most beaches. Large breaking waves and strong currents may impact harbor entrances and channels causing challenging boat handling.”

A flash flood watch has been issued for Maui and the Big Island, starting late Friday night through Sunday afternoon.

“Depending on the exact track,” the National Weather Service says, “there is the possibility of intense rainfall and flash flooding this weekend. The greatest risk of flash flooding will be to east and southeast facing slopes.”

“In addition to flood prone areas, heavy rain events of this size may cause flooding in areas outside the designated flood zones. Low spots in roads can become dangerous and impassable due to severe runoff. High amounts of debris in streams and gulches may clog bridges and culverts resulting in dangerous flooding which could occur outside the normal channels and could also lead to significant property damage.”

Darby’s satellite signature has changed little since the last advisory, with a compact area of deep convection wrapping around the center, mainly in the northern semicircle. Although subjective Dvorak fixes from HFO/SAB/GTW all indicated a data-T of 3.0/45 kt, the initial intensity for this advisory will be maintained at 55 kt. Reconnaissance aircraft from the 53rd Weather Reconnaissance Squadron are en route to Hawaii, and initial flights into Darby are scheduled for this time tomorrow, allowing for a much better estimate of Darby’s actual intensity.

The initial motion for this advisory is estimated to be 260/12 kt, with Darby being steered by a retrograding mid-level ridge centered well north of Hawaii. This ridge will be the primary steering mechanism over the next 48 hours or so, after which time a deep layer low digging southward will weaken the ridge, causing a reduction in Darby’s forward speed. Between 48 hours and 72 hours, steering currents are expected to be weak, with Darby still expected to make a turn toward the northwest. In the longer range, a deep layer southerly flow should steer Darby more quickly toward the north and lead to weakening. Latest guidance however has trended toward a less dramatic turn, and shifted closer to Hawaii. The updated track forecast is similar to the previous through 48 hours, after which time it has been shifted closer to Hawaii, in response to a significant westward shift in most of the reliable guidance, namely the TVCN and GFEX. The official forecast lies on the right hand side of the guidance suite, and if model trends continue, the forecast may need to shifted westward with subsequent forecasts. The updated track forecast necessitates the issuance of a tropical storm watch for the Big Island and Maui County.

The intensity forecast is essentially unchanged from the previous, with light to moderate shear inhibiting strengthening while Darby traverses slightly warmer water over the next 48 hours. Gradually cooling water temperatures and increasing shear are expected to lead to a weakening trend on days 4 and 5, and the updated forecast is close to the IVCN consensus. Of note, while the official track forecast indicates Darby tracking over portions of the Hawaiian Islands, the intensity forecast is thus far not indicating significant weakening due to interaction with land.

Interests elsewhere in the Hawaiian islands should monitor the progress of Darby, as it could eventually have impacts on all islands. Remember, it is important not to focus too closely on the exact track and intensity forecasts because the average track error 72 hours out is near 100 miles, while the average intensity error is about 15 kt. In addition, the hazards of a tropical cyclone can extend over a broad area well away from the center.NWS CENTRAL PACIFIC HURRICANE CENTER HONOLULU at 11 am HST

“It is vital that you do not focus on the exact forecast track,” the National Weather Service states. “Forecast movement, direction, and speed are only estimates. Even small errors in the forecast track can mean major differences in where the worst conditions will occur. Also, remember that damaging effects can extend far from the center.”

Now is the time for Hawaii Island to prepare, forecasters warn. “Secure or bring indoors any loose outdoor objects like lawn furniture, childrens toys, hanging plants, barbecue grills, or any item that could become a destructive projectile in strong winds. Do not wait until it is too late.”

“Stay calm and keep informed,” NWS says. “Closely monitor NOAA weather radio or other local news outlets for official storm information. Listen for warnings or changes to the forecast. Be ready to evacuate if necessary. Heed the advice of local officials and comply with any orders that are issued. Persons living near the shore should be prepared to evacuate quickly should building surf threaten.”