WASHINGTON D.C. (BIVN) - The members of the media let out a laugh when Press Secretary Josh Earnest boldly attempted the pronunciation of the marine monument. 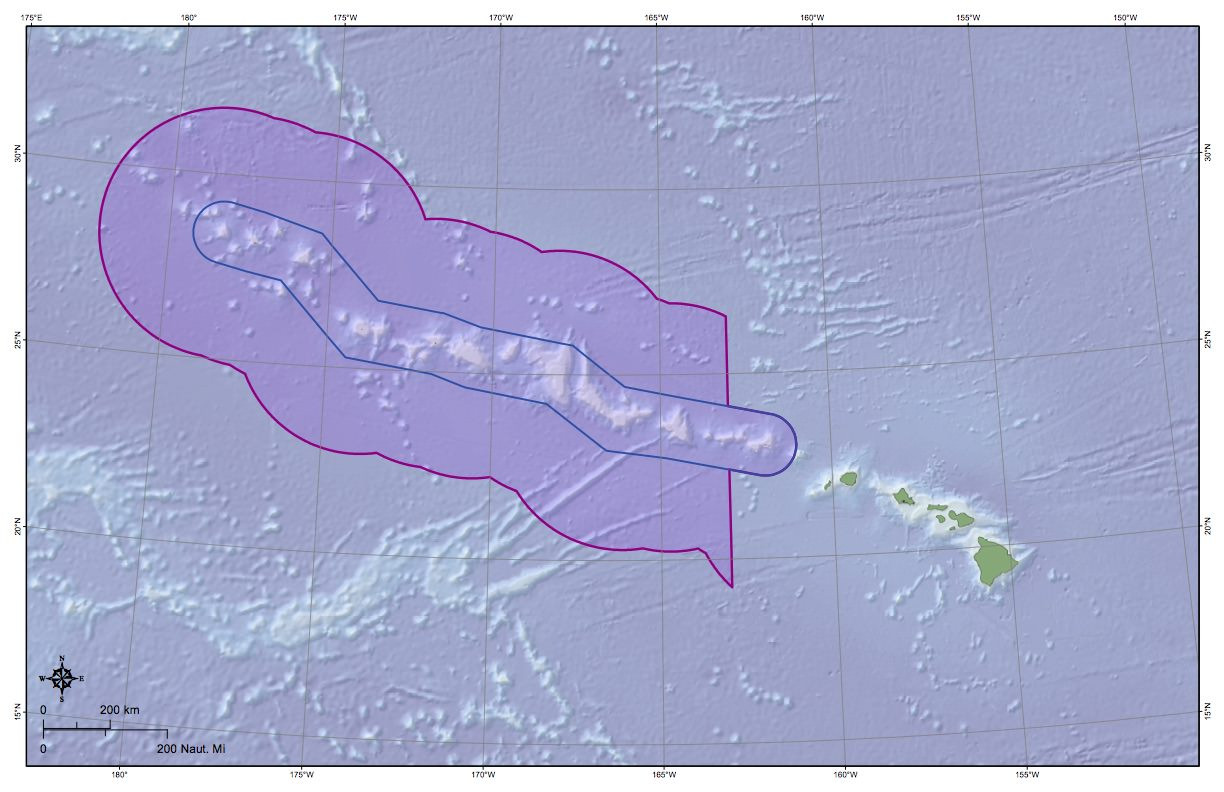 NOAA map showing the expanded area of Papahānaumokuākea Marine National Monument. The new boundary extends out to the U.S. EEZ (shown in purple). The monument’s original area is shown in blue.

WASHINGTON D.C. – The announcement was made during Friday’s White House press briefing: the Papahānaumokuākea Marine National Monument has been officially expanded to become the world’s largest marine protected area.

Speaking to a group of reporters in the James S. Brady Press Briefing Room, Press Secretary Josh Earnest began the discussion by talking about President Barack Obama’s action. The members of the media applauded Earnest’s bold attempt at pronouncing the Hawaiian name of the marine monument.

MR. EARNEST: Morning, everybody. Happy Friday. Before we get started I’ll just do a — one piece of news you may have seen already. As part of the President’s commitment to protect the natural beauty of the United States, we announced today that President Obama is building on this leadership by taking an historic step in creating the world’s largest marine protected area just off the coast of Hawaii.

The designation will more than quadruple the size of the existing marine monument, permanently protecting pristine coral reefs, deep-sea marine habitats, and other important ecological features and resources in the waters of the northwest Hawaiian Islands. Altogether, President Obama has protected more public lands and waters than any other President, and has protected important marine coastal environments, spectacular natural areas renowned for their outdoor recreation opportunities they offer.

And these sights often help tell the story of significant people or extraordinary events in American history. In fact, studies have shown that every dollar we invest in our national parks generates $10 for the national economy, most of which stays in local communities. And our national parks, forests and other public lands attract visitors from all over the world, fueling local economies and supporting an estimated $646 billion-dollar national outdoor economy.

So I’m happy to take your questions on the Papahanaumokuakea National Marine Monument — (applause) — or anything else that may be on your mind today.

The White House was sure to link the news item with President Obama’s upcoming trip to Honolulu to participate in the IUCN World Conservation Congress next week. The White House issued this Fact Sheet:

Following this historic conservation action, the President will travel to Hawaii next week. On Wednesday evening, he will address leaders from the Pacific Island Conference of Leaders and the IUCN World Conservation Congress, which is being hosted in the United States for the first time. On Thursday, he will travel to Midway Atoll, located within the Papahānaumokuākea Marine National Monument, to mark the significance of this monument designation and highlight first-hand how the threat of climate change makes protecting our public lands and waters more important than ever.

The monument was originally created in 2006 by President George W. Bush and designated as a UNESCO World Heritage Site in 2010. Since that time, new scientific exploration and research has revealed new species and deep sea habitats as well as important ecological connections between the existing monument and the adjacent waters. Today’s designation will expand the existing Marine National Monument by 442,781 square miles, bringing the total protected area of the expanded monument to 582,578 square miles.

The expansion provides critical protections for more than 7,000 marine species, including whales and sea turtles listed under the Endangered Species Act and the longest-living marine species in the world — black coral, which have been found to live longer than 4,500 years. Additionally, as ocean acidification, warming, and other impacts of climate change threaten marine ecosystems, expanding the monument will improve ocean resilience, help the region’s distinct physical and biological resources adapt, and create a natural laboratory that will allow scientists to monitor and explore the impacts of climate change on these fragile ecosystems.

The expanded monument area also contains resources of great historical and cultural significance. The expanded area, including the archipelago and its adjacent waters, is considered a sacred place for the Native Hawaiian community. It plays a significant role in Native Hawaiian creation and settlement stories, and is used to practice important activities like traditional long-distance voyaging and wayfinding. Additionally, within the monument expansion area, there are shipwrecks and downed aircraft from the Battle of Midway in World War II, a battle that marked a major shift in the progress of the war in favor of the Allies.

In recognition of the value of Papahānaumokuākea to Native Hawaiians, and in keeping with President Obama’s commitment to elevating the voices of Native peoples in management of our resources, Secretary of the Interior Jewell and Secretary of Commerce Pritzker also announced that the Departments will soon sign an agreement with Hawaii’s Department of Natural Resources and Office of Hawaiian Affairs providing for a greater management role as a trustee in the Papahānaumokuākea Marine National Monument. This arrangement has been previously requested by Senator Brian Schatz and Governor Ige.

Today’s action by President Obama responds to a proposal put forward by Senator Schatz and prominent Native Hawaiian leaders, in addition to significant input and local support from Hawaii elected officials, cultural groups, conservation organizations, scientists and fishermen. This step also builds on a rich tradition of marine protection in Hawaiian waters and world-class, well managed fisheries, including a longline fishing fleet that is a global leader in sustainable practices.

In addition to protecting more land and water than any Administration in history, President Obama has sought to lead the world in marine conservation by combating illegal, unregulated and unreported fishing, revitalizing the process for establishing new marine sanctuaries, establishing the National Ocean Policy, and promoting ocean stewardship through the use of science- based decision making.

Papahānaumokuākea came up a few more times during today’s press briefing. Here is more of the transcript:

Q And on the national monument expansion, how does the administration decide whether to expand it by 400,000 square miles, or more or less? How is that decision made?

MR. EARNEST: Well, there are a couple of factors that go into this. The first is, obviously, the President is relying on the scientific advice of officials at NOAA and other prominent government scientists who can talk about steps that the President can take, using his executive authority, to protect this valuable area. There’s also important input that we receive from local residents. When we’re talking about a marine monument like this, we’re obviously talking about people who live in the area. And obviously the native Hawaiian population views this area as quite special, if not sacred, and that’s why built into the creation of this monument are opportunities for native populations to continue to engage in the kinds of activities that are consistent with their cultural heritage.

There also is — I know that, for example, there also is an allowance that people, when they get a proper permit, that they can conduct private fishing operations in the area. I know that there’s a limit on commercial activities in this region, but people who want to fish for themselves can get a permit from the government and potentially have it approved and be able to do so.

Those are just two examples of how these kinds of designations are only enacted after robust conversation with the people who are most directly affected. And we saw that that certainly was true in Maine, when the President earlier this week designated some woodlands and waterways in Maine for special protection. There’s a lot of important work that had been done with people in local communities there to not just minimize the negative impacts on their communities but also to try to maximize the positive impact. And there is the expectation — I noted at the beginning the potential positive economic impact of these kinds of designations in the form of eco-tourism and other things.

Q And all of that protected water is U.S. federal waters?

MR. EARNEST: Yes, my understanding is all of this area is within the territorial waters of the United States of America.

Q A lot of waters.

Q A couple of follow-up questions on Papahanaumokuakea.

MR. EARNEST: Thank you for joining me.

Q First, the President used his authority under the Antiquities Act fairly sparingly in his first term. He only did a couple of unilateral designations and they were relatively small in terms of land and water size. He’s obviously invoked it quite frequently in his second term. Can you talk about what’s propelled this shift for him to use the Antiquities Act as aggressively as he has in his second term?

MR. EARNEST: Well, I think an important part of this, Juliet, is what I was just talking to Mark about, which is that these kinds of designations are not issued on short notice. These decisions are only made after extensive consultation with local communities. I know that there were — I think this is true both in Maine and in Hawaii, that there were — this is literally the culmination of a years-long effort to protect these pristine waters in Hawaii while ensuring that the way of life of native Hawaiians is also protected. And that requires a lot of negotiation and a lot of consultation and extensive follow-up. So that would account for some of this, which is that it took years to get this going and we’re starting to enjoy the benefits of that work.

I know that there also has been a realization that there is a role for Congress to play in terms of setting aside certain territory, lands and waters in the United States for future preservation, but we haven’t seen a lot of congressional activity of any sort, really, over the last few years. And it has turned the President’s attention to more robust use of executive action.

The President, I think in each of these cases, would be happy to sign into law a piece of legislation that would have protected these waters. But we haven’t seen that kind of legislative activity in this Congress, and it means the President has had to make more effective use of his executive authority, and that’s what he’s done, in a way that will benefit not just people in Hawaii, but the American people for generations to come.