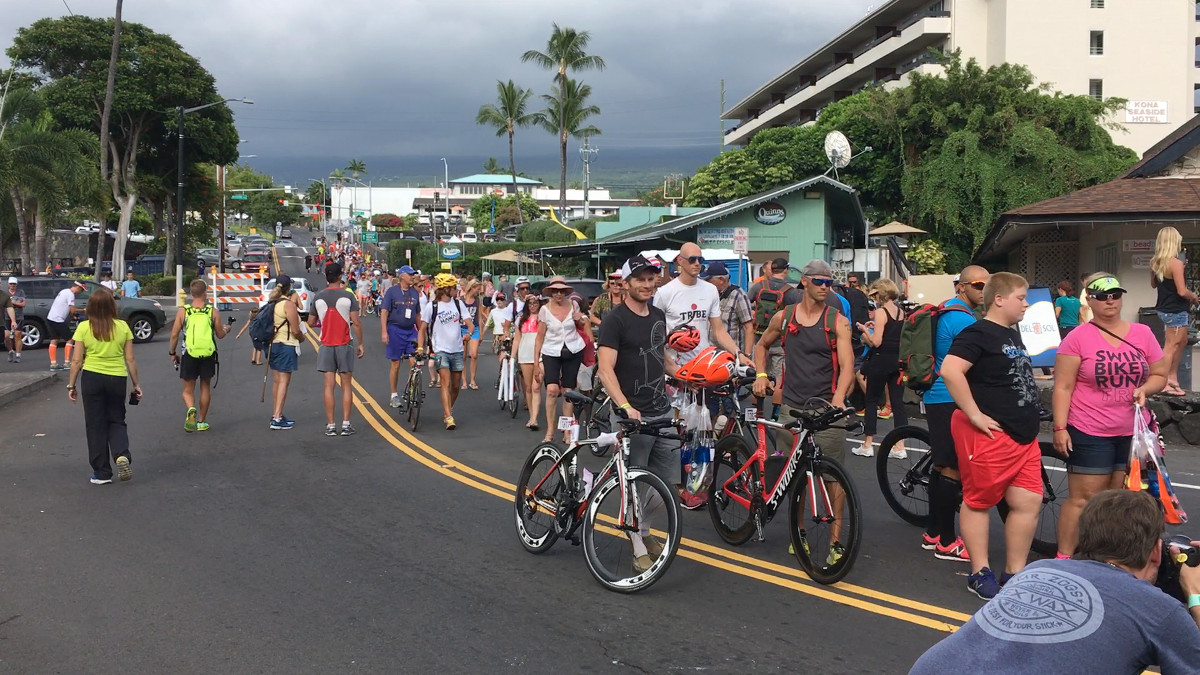 KAILUA-KONA, Hawaii – The 38th annual IRONMAN® World Championship will race its way through the streets of West Hawaii today, part of “the most iconic one-day endurance event in the world”, organizers say.

“There is no other endurance competition in the world that brings together such a talented and fiercely competitive group of professional athletes,” said Andrew Messick, Chief Executive Officer for IRONMAN. “The IRONMAN World Championship is the marquee event of the endurance world, and these passionately devoted competitors have been preparing for this moment and will no doubt put on a spectacular race.”

Kona is quite familiar with the race sees over 2,300 athletes embark on three grueling legs of a the triathlon; a 2.4-mile open-water swim, 112 miles of cycling and a 26.2-mile run. The 140.6-mile journey must be completed by midnight in order for athletes to be recognized as official IRONMAN finishers. The race began in 1978 on the island of Oahu and moved to Kona in 1981.

Leading the women’s professional field is 2015 IRONMAN World Champion and two-time defending IRONMAN® 70.3® World Champion, Daniela Ryf (CHE). Also vying for the title is 2014 IRONMAN World Championship winner, Mirinda Carfrae (AUS), who is seeking redemption after an injury forced her to withdraw from last year’s race; Heather Jackson (USA), who burst onto the scene in Kona last year as the top American finisher and later set a course record victory at the 2016 IRONMAN Lake Placid; and dominant veteran Melissa Hauschildt (AUS), who won the 2016 Mainova IRONMAN European Championship and has also claimed a pair of IRONMAN 70.3 World Championships.

“This year has been about Saturday,” Jackson said. “I set myself up as best as I can to prep for this day. Lake Placid was huge for me, and I was able to draw a lot of confidence from training. I’ve been focusing on Saturday, and I’m excited to race and grateful to be here.”

The men’s group is equally crowded with titleholders and contenders, including reigning IRONMAN World Champion, Jan Frodeno (DEU), who made history in 2015 by becoming the first IRONMAN competitor to capture triathlon’s triple crown – he previously won gold at the 2008 Beijing Olympics and was triumphant at the 2015 IRONMAN 70.3 World Championship. Frodeno’s fellow German rival, 2014 IRONMAN World Champion Sebastian Kienle (DEU), is coming off a slender second-place finish at the IRONMAN 70.3 World Championship in Sunshine Coast, Queensland, Australia, and is poised to attempt to reclaim his Kona title.

“It was a very thin wire to walk, but I was happy to pay this race the respect it deserves,” Frodeno said about his decision to focus on defending his title and forgo racing in this year’s IRONMAN 70.3 World Championship. “I needed a break and I had to learn from my mistakes in the past. In the end it was a smart move.”

Fans around the world will also be keeping their eyes on 2016 IRONMAN South American champion, Brent McMahon (CAN), and Tim O’Donnell (USA), whose third-place finish in Kona last year made him the top American male for a second time since 2013. Multi-time IRONMAN champion Andy Potts (USA) and the 2016 Cairns Airport IRONMAN Asia-Pacific Championship winner, Timothy Van Berkel (AUS), highlight an impressive field.

Live race coverage of the 2016 IRONMAN World Championship can be viewed on ironman.com.

With so many competitors flooding Kona, there are some impacts to everyday life.

In addition to the closure of Queen Ka’ahumanu Highway, it will not be a good day to take care of trash. The Pu‘uanahulu Landfill in Waikoloa and the Kealakehe Recycling and Transfer Station in Kailua-Kona will be closed all day on Saturday, the Department of Environmental Management says.

Regular operations at the Kealakehe Recycling and Transfer Station will resume on Sunday, October 9, 2016. The Pu‘uanahulu Landfill will resume its normal schedule and re-open on Monday, October 10, 2016.