HILO (BIVN) - "I firmly believe that the highest level of desecration rests in actions that remove the opportunity and choices from the kind of future our youth can own," Kalepa Baybayan stated. 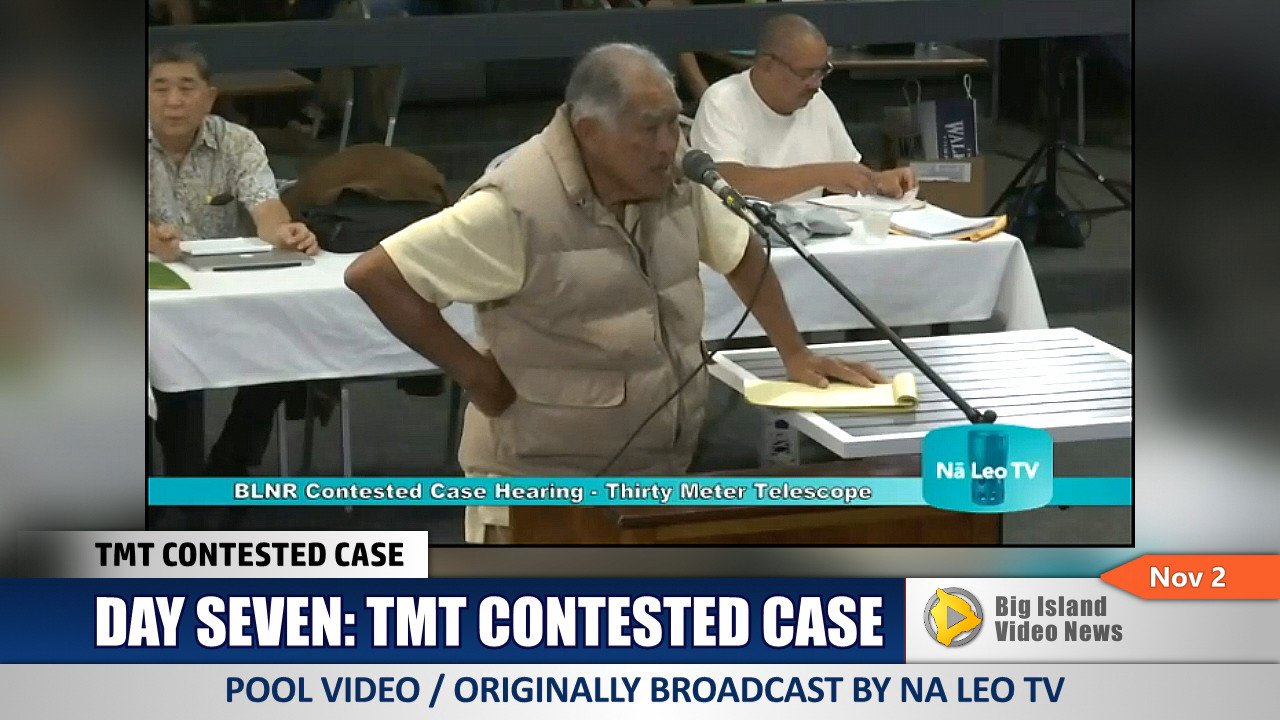 HILO, Hawaii – Master navigator Chad Kalepa Baybayan took the stand as the fourth witness for the University of Hawaii during the ongoing Thirty Meter Telescope contested case hearing on November 2.

“My perspective of Mauna Kea is based upon a tradition of oceanic exploration,” Baybayan said during his opening statement, “and the legacy of what people who left the safety of the shoreline sailed away and discovered the stars.”

Baybayan serves as a Captain and Navigator of the Hokule’a deep-sea voyaging canoe and is currently working on the Polynesian Voyaging Society’s Malama Honua World Wide Voyage. He was granted the rank of Pwo in the Satawalese tradition, one of only five wayfinders in Hawaii to be so ordained.

Much of Baybayan’s testimony drew from an editorial he wrote that was published in the West Hawaii Today newspaper in April 2013.

When it is completed, the Thirty Meter Telescope on Mauna Kea will with greater accuracy and speed, vastly increase the capacity for the kind of scientific research vital to the quest for mankind’s future. It takes place on a sacred mountain; remains consistent with the work of our ancestral forebears; and is done to the benefit of tomorrow’s generations, here in Hawaii, and across the globe.

Mauna Kea, like life, is sacred, and we need to proceed with the important work of insuring our future.

Let’s look to Mauna Kea and continue a synergy of mountain, exploration, and the stars.

The piece was cheered by TMT supporters, and rebutted by TMT opponents.

From the witness stand, Baybayan held his position that it is appropriate to construct TMT on Mauna Kea.

“In closing,” Baybayan said, “I believe that it is culturally consistent to advocate for the Thirty Meter Telescope, and Hawaiian participation in the field of science, astronomy, that continues to enable a tradition of exploration and a legacy of discovery.”

“I firmly believe that the highest level of desecration rests in actions that remove the opportunity and choices from the kind of future our youth can own,” Baybayan finished.

After Baybayan’s opening statement, the cross examinations began. Things moved quickly at first, as two of the original petitioners only had a few quick questions.

“We are honored to have you here,” petitioner Kealoha Pisciotta said to the navigator as she began asking would would end up being only a few questions. Pisciotta penned the counter-response to Baybayan’s 2013 WHT op-ed.

“I don’t know what if you know it or not but we have a very deep relationship, you and me,” Ching said. “And the reason is that from 1990 to 1992, I was a member of the Wright Bowman Jr.’s crew that constructed the Hawaii Loa.”

“Yeah, I recall your participation in the project,” Baybayan answered.

“And so for me,” Ching responded, “when you get on that canoe, it makes me feel very, very spiritually and emotionally involved.”

Ching then asked Baybayan if any of his ceremonies took place on Pu’u Lilinoe, Pu’u Poliahu, or Pu’u Kanakaleonui.

“No, I have not,” Baybayan said. “These are all pu’u on the summit of Mauna Kea?”

“Near the summit,” Ching responded, before ending his questioning.

Pua Case then began her cross-examination. Her questioning asked Baybayan to indirectly compare the Mauna Kea to the Koʻa Holomoana navigational heiau at Mahukona, and how “traditional methods of observing the stars” at either site would be impacted by the construction of an adjacent 18-story observatory.