MOUNTAIN VIEW (BIVN) - Between Fern Acres and Highway 11 in Puna Mauka is the Old Volcano Trail. Environmental consultant Ron Terry took a close look at the path recently and told the community what he saw.

MOUNTAIN VIEW, Hawaii – Residents learned about a nearly-forgotten road along the route of Old Volcano Trail during a meeting to discuss connectivity in Fern Acres.

Ron Terry, a Geometrician Associates LLC environmental consultant hired to help put together a Draft Environmental Assessment for new roads in and around the Puna subdivision, detailed what is known about the path during a public meeting held last week in Mountain View.

“This is a trail that’s held by the state of Hawaii,” Terry explained. “It represents the boundary between the ahupua’a and it also is an approximation of a route of an old trail that went up to Volcano and became a road. By the 1890’s they decided that it wasn’t a very good place to have this road, and they realigned it out to the present area that we have now. That has turned into a state highway.”

“The old road is out there,” Terry said as he projected a map in the school cafeteria. “Now, the physical traces of the old road; we did not run into them. It’s not that surprising some of it was pretty crude and it’s been bulldozed in a lot of places and worked over.

There is not much of the old road remaining along the Old Volcano Trail, Terry said. “We know from the descriptions of the surveyors at the time that it (the trail) has a straight line. The road wasn’t straight. The road went in and out and in and out. But they used a survey or traverse to define the roadway, they said it will be easier for us to the survey, will be easier for us to maintain, and it won’t infringe on the people who are living in the homesteads.”

“In case if any of you wander out there and look for the old trail,” Terry said, “there are traces of it here and there but not in our project area. That simply didn’t show up.”

The county is considering a project to improve road accessibility during events such as floods, fires, automobile accidents, or other emergencies that block subdivision roads, connector roads, or Volcano Highway. 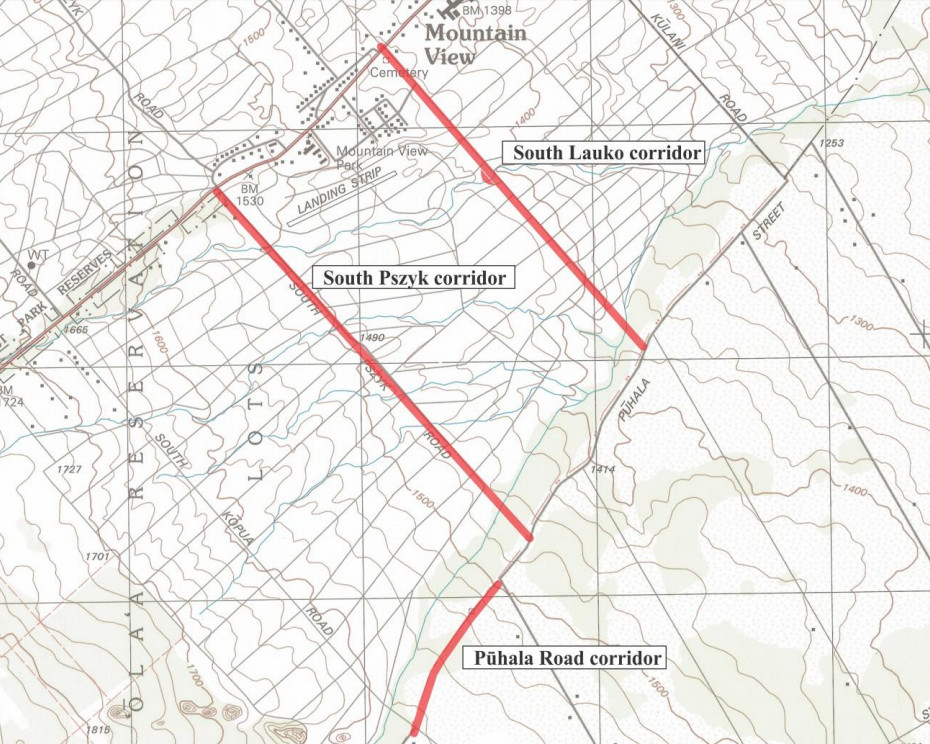 Map showing the possible road extensions from the Draft EA.