MAUNA KEA (BIVN) - A group of Hawaiian Homes beneficiaries has occupied a part of the Humuʻula lands, building a memorial ʻahu and promising accelerated land awards. 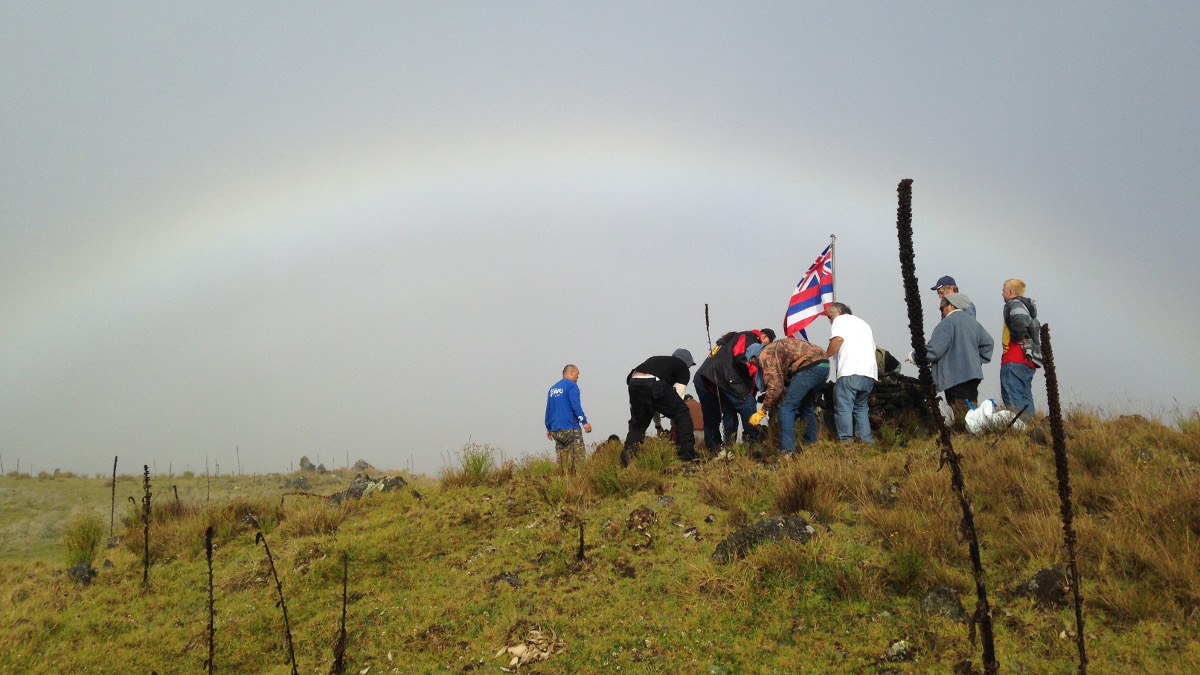 MAUNA KEA, Hawaii – On November 28, during the Hawaiian national holiday of Lā Kū’oko’a, a small group of Hawaiian Homes beneficiaries hopped a fence on ʻĀina Mauna pasture lands to build a memorial ʻahu, and proceed with a plan for “accelerated” land awards.

“Welcome to the promised land; it’s been promised for 70 years,” announced Kelii “Skippy” Ioane, as a truck pulled up to a chained fence gate and began unloading rocks.

Then, under the ho’ailona of a white rainbow, the beneficiaries went to work building the ʻahu that would be named ʻAhu a ʻUla – described as a memorial in honor of the thousands of Hawaiians who died on the homestead wait list.

They left a sign propped up against the fence that read: HAWAIIAN HOMELAND NATIVE TENANTS ACCELERATED LAND AWARDS IN PROGRESS.

The Department of Hawaiian Home Lands (DHHL) administers the provisions of the Hawaiian Homes Commission Act of 1920, including homestead leases to beneficiaries.

There are over 40,000 applications for families waiting to be returned to the ‘āina, according to the DHHL website. Many have died, waiting for their application to be processed.

This group has had enough.

“We went up there to make a census of our kupuna who have passed waiting on that list,” Iokepa Kaolulo Kaeo, who sits on the Beneficiary Trust Council, later told Big Island Video News. “Its been over 90 years since that act has been formed and only 9,000 kanakas – beneficiary – are on those lands.”

On February 4, 2016 in Keaukaha, DHHL consulted with beneficiaries on the future of three parcels in the Humuʻula region, a part of the department’s ʻĀina Mauna Legacy Program.

A plan to renew a license agreement to the Hawaii DLNR for the right to operate, maintain, and manage the lands for wildlife management and public hunting was rejected by the beneficiaries.

At the same meeting, Iokepa Kaeo and Lākea Trask presenting the beginnings of a plan to manage the lands according to the will of the beneficiaries.

“Cut the leases on the mountain,” Trask said at the meeting. “Let’s make it ‘āina; ‘āina is a connection between kanaka and the environment.”

In the time since, a Beneficiary Trust Council (BTC) has been established, with representatives from all 6 districts.

Protocols were observed at Pu’u Huluhulu along the Saddle Road before they headed up to the location of the ʻahu. The events were recorded by the participants.

“Water and land equals house and food,” said BTC member Malani Alameda. “There’s too much homeless. There’s no reason why kanaka, with the blood quantum of 50%, right now be homeless. Through this special trust – through Jonah Kūhiō and Congress – we have land.”

“We have a plan,” Alameda said. “It’s the kuleana of the reps to get the plan out to people so we can work that plan according to the beneficiaries.”

However, there appears to be some opposition to their plan. Alameda and Kaeo say ʻAhu a ʻUla has already been desecrated; the flag has been stolen four times. They have been in contact with DHHL over the matter, they say.

Big Island Video News reached out to DHHL for their comment on the situation.