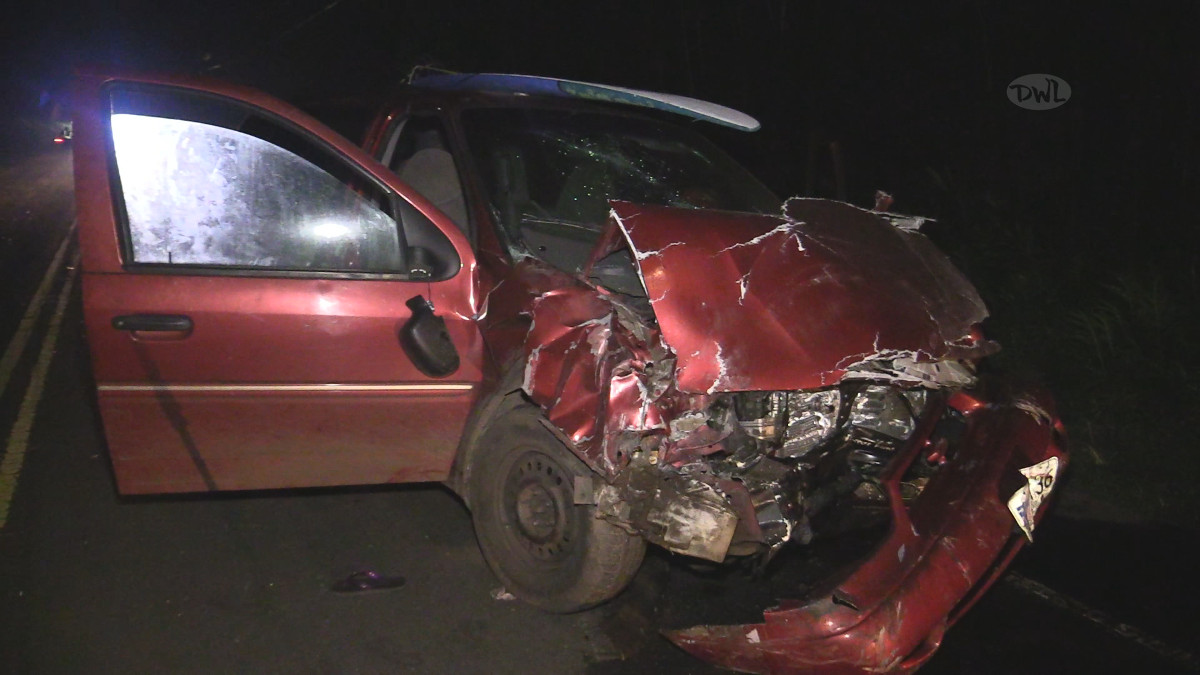 ABOVE PHOTO by Daryl Lee

The fire department reports a 50 year old male was transported to the hospital where he later died. Three others were taken to Hilo Medical Center in serious condition.

UPDATE (8:50 a.m.) – The name of the deceased is being withheld pending positive identification and notification of his family, police say.

The crash occurred near the 13 mile marker, and the highway was closed between Leilani Blvd and Malama St. Police say traffic was rerouted using Leilani, Kahukai, and Malama.

In a Friday morning media release, police described the scene of the crash.

Responding to a 6:54 p.m. call, police determined that a 2004 Ford pickup truck had been heading Kalapana-bound on Highway 130 between Leilani Avenue and Malama Street and had been making a U-turn in the roadway when it was struck by a 1998 Ford passenger van traveling Pāhoa-bound.

The unidentified man was a back-seat passenger of the pickup. Medics took him to Hilo Medical Center, where he was pronounced dead at 7:55 p.m.

An adult female back-seat passenger of the pickup was also taken to Hilo Medical Center by medics and was being treated for her injuries. She remains in stable condition.

The driver of the pickup, a 74-year old Pāhoa woman, was treated for her injuries at the scene.

The front-seat passenger of the van, a 7-year old Pāhoa girl, was taken to Hilo Medical Center by medics and then flown in stable condition to Kapiʻolani Medical Center for Women and Children in Honolulu.

The back-seat passenger of the van, a 65-year old Pāhoa woman, was taken by medics to Hilo Medical Center for treatment of her injuries. She remains in stable condition.

The driver of the passenger van, 30-year-old Justin Clark of Pāhoa, was arrested for DUI, driving without a license and driving without insurance. Police took him to Hilo Medical Center for treatment of his injuries.

After conferring with the Office of the Prosecuting Attorney, police say they released Clark pending further investigation.

Police have initiated a negligent homicide investigation in connection with this crash. An autopsy has been ordered to determine the exact cause of death. Police believe that alcohol and speed were factors in this crash.

Police ask anyone who witnessed the crash to call Officer Erhard Autrata at 961-8118. Tipsters who prefer to remain anonymous may call Crime Stoppers at 961-8300.

This is the first traffic fatality this year compared with none at this time last year.