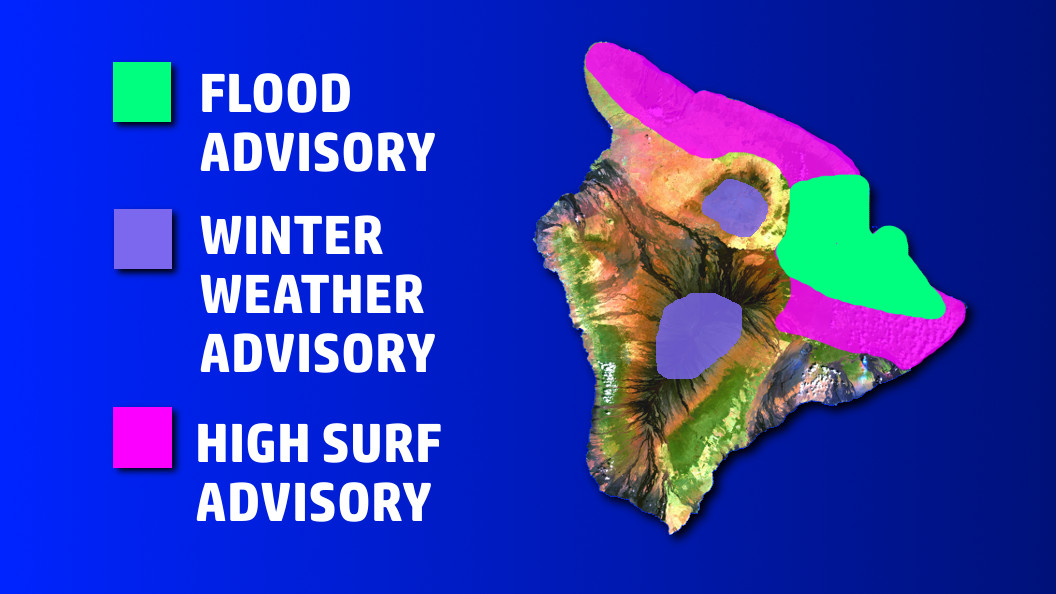 HAWAII ISLAND (BIVN) - The National Weather Service in Honolulu has posted a number of advisories for the Big Island of Hawaii.

The National Weather Service in Honolulu has posted three advisories for the Big Island.

At 6:30 a.m. HST, forecasters say radar indicated heavy rain near Hilo. Rain was falling at a rate of 1 to 2 inches per hour. Locations in the advisory include but are not limited to Hilo, Hawaiian Paradise Park, Keaau, Laupahoehoe, Pepeekeo, Papaikou, and Hakalau.

“At 8:16 a.m. HST,” the National Weather Service says, “radar indicated persistent rain falling at rates of 1 to 2 inches per hour in and around Hilo and over the Puna district, with isolated rain rates up to 3 inches per hour. Civil Defense reported heavy ponding on some roads in Hilo, including Kukila Street and Pauahi Street.”

The area of the advisory has also been extended to include Glenwood, Hawaiian Acres, Mountain View, and Volcano.

There is also a Winter Weather Advisory in effect until noon for the summits of Mauna Kea and Mauna Loa. A quarter inch of ice is accumulating on the roads. The Maunakea Access road is closed to the public at the Visitor Information Station at an elevation of 9,200 feet due to high humidity, heavy fog, light snow flurries and moderate rain, rangers report.

A High Surf Advisory is also in effect until noon today. Wave heights along the east facing shores of the Big Island will be 6 to 9 feet.