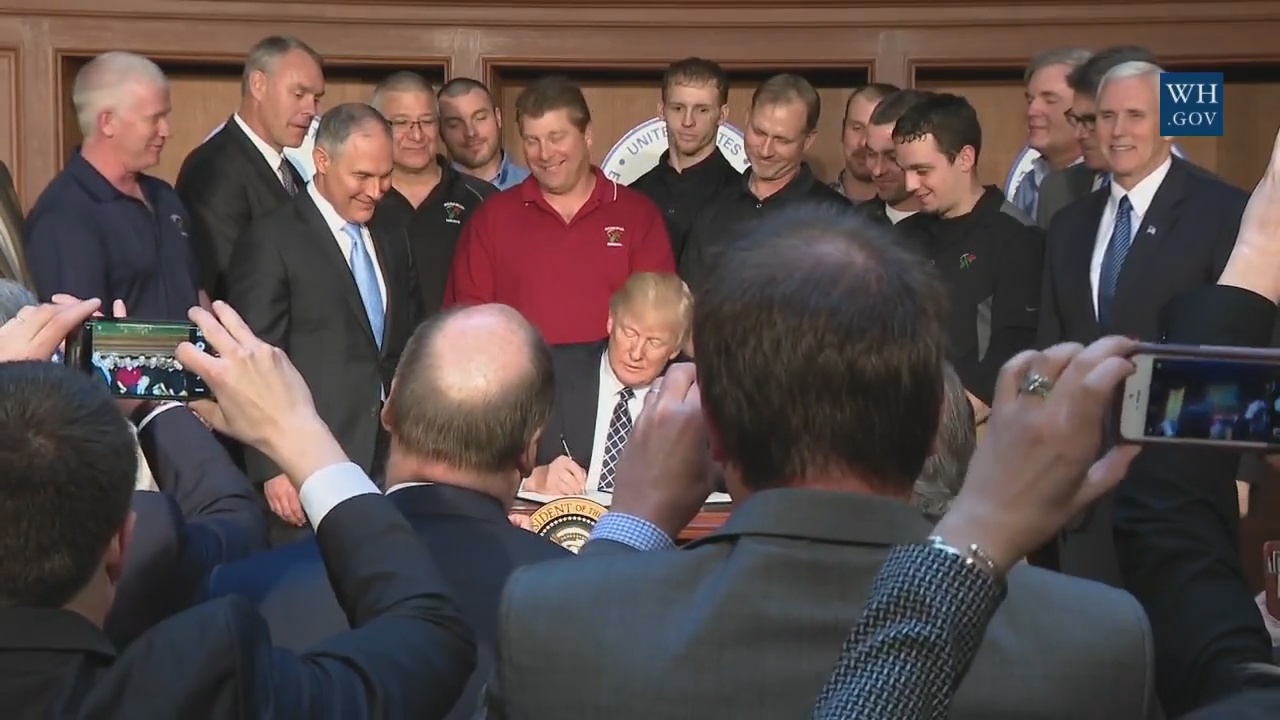 WASHINGTON D.C. – On Tuesday, before a lively crowd assembled at the Environmental Protection Agency Headquarters, President Donald Trump rolled back years of regulatory rule making with a stroke of his pen and committed his administration to a stark about-face on climate change policy. Just as he promised he would during the campaign.

“Today, I’m taking bold action to follow through on that promise,” Trump declared. “My administration is putting an end to the war on coal. We’re going to have clean coal — really clean coal. With today’s executive action, I am taking historic steps to lift the restrictions on American energy, to reverse government intrusion, and to cancel job-killing regulations.”

The crowd at the EPA building cheered.

The executive order, entitled the “Energy Independence Policy”, does the following, according to the White House:

Trump’s views on climate change run contrary not only to those of the Obama administration, but to the science being done right here in Hawaii. Ongoing measurements taken at NOAA’s Mauna Loa Baseline Atmospheric Observatory show an unprecedented rise in carbon dioxide levels over a two-year period.

A recent NOAA report stated carbon dioxide (CO2) in the Earth’s atmosphere increased by 3 parts per million in 2016, rising the overall average amount to 405.1 parts per million (ppm). Scientists say the increase that matched the record jump observed in 2015.

The Democratic Party has rallied behind the philosophy that the change in climate is primarily a man-made problem, while many of their Republican opponents have sought to debunk that theory.

But it doesn’t have to be a political issue, pointed out Ryan Perroy, a University of Hawaii-Hilo assistant professor in the Department of Geography and Environmental Science. He spoke on the climate change issue during the well-attended Women’s March in Hilo held the day after Trump’s inauguration. He pointed out that Charles David Keeling – the father of the Keeling curve graph that plots the CO2 data collected at Mauna Loa – was a Republican.

“This is an important point for me,” Perroy said to the crowd at the Mo’oheau Bandstand (video below), “because science is blind to political pursuasion.”

The Senate Democrats lacked the numbers to block any of Trump’s cabinet nominations. On Tuesday, Pruitt was the first speaker at the podium, introducing the president and Vice President Michael Pence before the signing of the executive order.

After Trump took the stage, he acknowledged the nation’s coal miners, personified by the group of men who were sharing the stage. Trump took time to shake their hands one by one. “We love our coal miners,” the president said. “Great people. Over the past two years, I’ve spent time with the miners all over America. They told me about the struggles they’ve endured.”


Trump then got to signing the order.

One after another, we’re keeping our promises and putting power back into the hands of the people. First, today’s energy independence action calls for an immediate reevaluation of the so-called Clean Power Plan. Perhaps no single regulation threatens our miners, energy workers, and companies more than this crushing attack on American industry.

Second, we are lifting the ban on federal leasing for coal production.

Third, we are lifting job-killing restrictions on the production of oil, natural gas, clean coal, and shale energy.

And finally, we are returning power to the states — where that power belongs. States and local communities know what is best for them. They understand it. They get it. They’ve been doing it for a long time. It was taken away from them, and not handled well — and they are the ones that we should now, and will now, empower to decide.

My action today is the latest in a series of steps to create American jobs and to grow American wealth. We’re ending the theft of American prosperity, and rebuilding our beloved country. We approved the permit to finally build the Keystone XL pipeline, and cleared the way to completion of the Dakota Access pipeline — thousands and thousands of jobs.

“President Trump’s latest executive order reverses the historic progress we’ve made on climate for short-term gains that will go straight into the pockets of oil, gas, and coal companies. This is another attempt by this administration to weaken environmental protections and America’s leadership and economic dominance in clean energy. Now is not the time to turn our back on the growing clean energy economy, and that’s exactly what this executive order will do.”

“This executive order is clear proof that this Administration is not committed to an ‘all of the above’ energy strategy. The President continues to promote alternative facts over empirical scientific evidence of climate change and unravel the clean and renewable energy progress that we have made over the past eight years.

“While the President can afford to live in this alternate universe, Hawaii and other island communities are forced to grapple with the reality of climate change. Our coral reefs are dying because of historically high ocean temperatures. By 2100, Hawaii’s sea levels will rise by more than three feet. We owe it to our keiki to listen to our climate scientists, and build upon, not erase, the progress we’ve made.”

“In light of President Trump’s Executive Order paving the path for the Keystone XL and Dakota Access Pipelines, and slashing funding for the EPA by nearly one-third, the consequence of today’s actions on our environment and precious water resources are especially concerning. Unless we make a concerted effort to reduce carbon emissions, invest in clean energy, create green jobs, and improve our air and water quality, we are moving backwards, at a time when our planet simply cannot afford for us to do so. In spite of this action today, I have no doubt that Hawaiʻi will continue to lead the nation in renewable energy production. We must continue investing in renewable energy, moving away from foreign oil and fossil fuels, and moving toward our goal of 100% clean energy by 2045.”