HAWAII - Monday's court opinion upholding the enjoined travel ban gives rise to questions about Trump "putting his own agenda in danger when it comes to his Twitter habit", from White House correspondents. 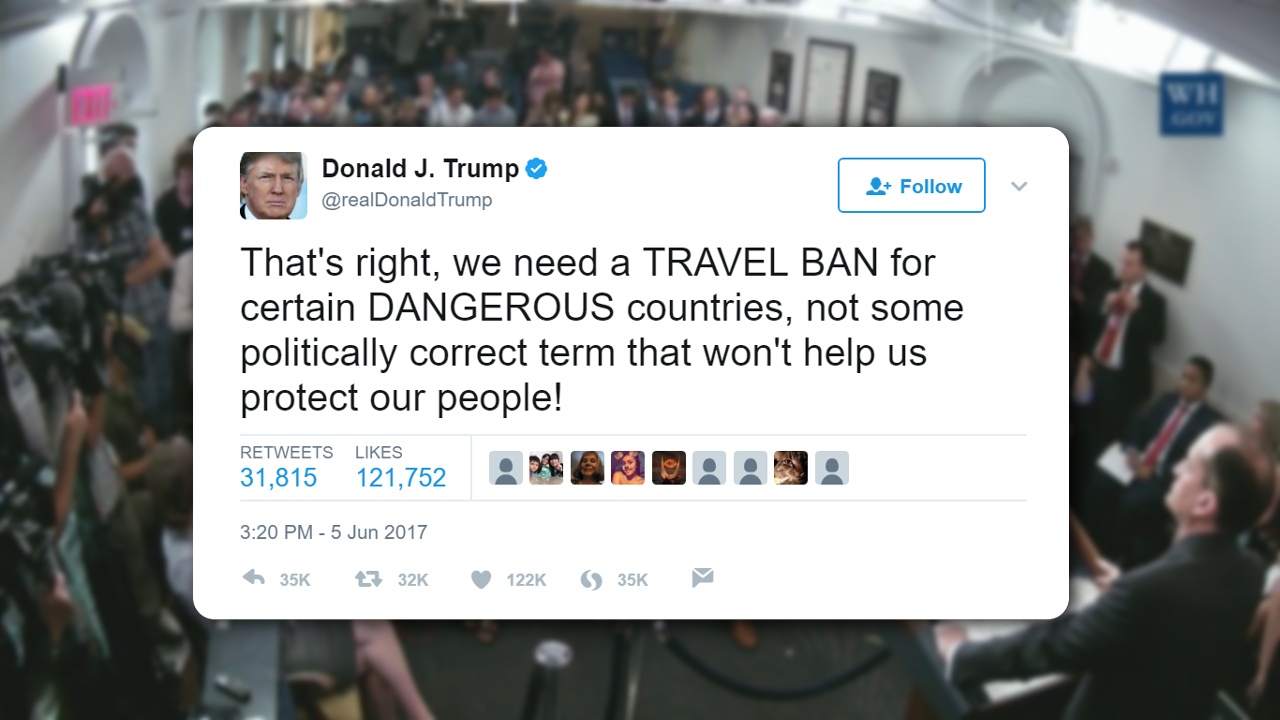 Last week White House press secretary Sean Spicer said Trump’s 148-character messages are indeed official statements. On Monday, the United States Court Of Appeals for the Ninth Circuit treated them as such in rendering its opinion in Hawaii v. Trump.

The appeals court affirmed in large part an earlier district court’s order preliminarily enjoining Sections 2 and 6 of the Trump’s March 6 Executive Order 13780 (the 90-day ban on travel for nationals of six of the seven majority-Muslim countries identified in the first order: Iran, Libya, Somalia, Sudan, Syria, and Yemen.) The State of Hawaii had filed a complaint challenging Trump’s order “to protect its residents, its employers, its educational institutions, and its sovereignty.”

“The President’s authority is subject to certain statutory and constitutional restraints. We conclude that the President, in issuing the Executive Order, exceeded the scope of the authority delegated to him by Congress,” the court stated in Monday’s opinion.

The court then made reference to one of Trump’s recent Tweets.

“The Order does not tie these nationals in any way to terrorist organizations within the six designated countries,” the court opined. “It does not identify these nationals as contributors to active conflict or as those responsible for insecure country conditions. It does not provide any link between an individual’s nationality and their propensity to commit terrorism or their inherent dangerousness.” To back up its assertion, the court specifically mentioned Trump’s June 5, 2017 tweet, posted at 6:20 p.m., in which Trump stated “That’s right, we need a TRAVEL BAN for certain DANGEROUS countries, not some politically correct term that won’t help us protect our people!”

NBC News White House correspondent Hallie Jackson questioned Press Secretary Spicer on the court opinion during Monday’s media briefing, saying the court cites “this administration’s statement that the President’s tweets are official statements. So given that measure, given that the travel ban is obviously a priority for the President, how is it that the President is not putting his own agenda in danger when it comes to his Twitter habit?”

Spicer sidestepped the Twitter aspect of Jackson’s question, responding “when you look at what the law is and the U.S. code that allows the President to do whatever he needs to, that’s what we were deciding on.” Spicer added, “frankly, I think any lawyer worth their salt 100 percent agrees that the President is fully within his rights and his responsibilities to do what is necessary to protect the country.”