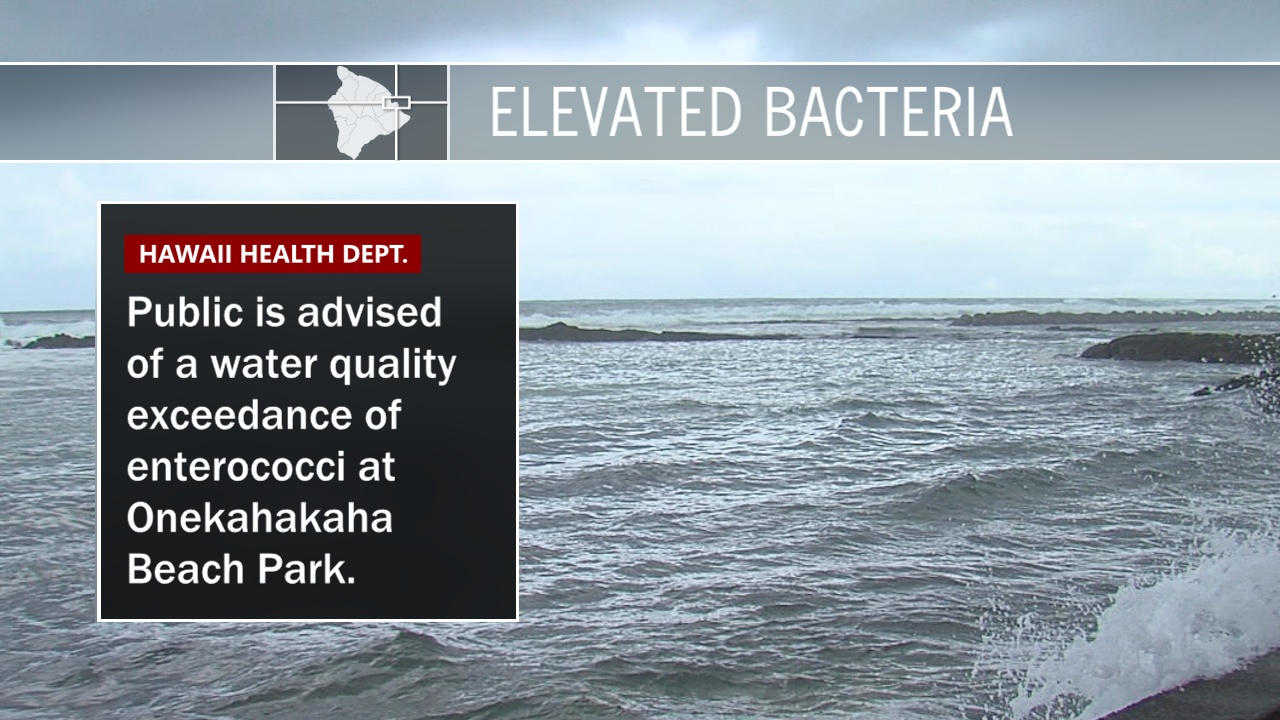 HILO, Hawaii - Levels of 271 per 100 mL have been detected during routine beach monitoring, the health department reports.

(BIVN) – Elevated bacteria levels have been recorded at a popular Keaukaha-area beach park.

The Hawaii Department of Health is advising the public of a water quality exceedance of enterococci at Onekahakaha Beach Swimming Area. Levels of 271 per 100 mL have been detected during routine beach monitoring.

“The advisory for this beach is posted because testing for enterococci indicate that potentially harmful microorganisms such as bacteria, viruses, protozoa, or parasites may be present in the water,” says the health department advisory. “Swimming at beaches with pollution in the water may make you ill. Children, the elderly, and people with weakened immune systems are the most likely populations to develop illnesses or infections after coming into contact with polluted water, usually while swimming.”

“Fortunately, while swimming-related illnesses can be unpleasant, they are usually not very serious,” health officials stated, adding the illnesses they “require little or no treatment or get better quickly upon treatment, and they have no long-term health effects.”

health officials say the most common illness associated with swimming in water polluted by sewage is gastroenteritis, which occurs in a variety of forms that can have one or more of the following symptoms: nausea, vomiting, stomachache, diarrhea, headache or fever.

Other minor illnesses associated with swimming include ear, eye, nose and throat infections, health officials say. “In highly polluted water, swimmers may occasionally be exposed to more serious diseases,” the state advisory states. “Not all illnesses from a day at the beach are from swimming. Food poisoning from improperly refrigerated picnic lunches may also have some of the same symptoms as swimming-related illnesses, including stomachache, nausea, vomiting and diarrhea.”

“At any given time and place, we are constantly exposed to a variety of microorganisms that have the potential of making us ill,” the health department said. “The beach remains open; however, this advisory will remain in effect until water sample results no longer exceed the threshold level of 130 enterococci per 100 mL.”