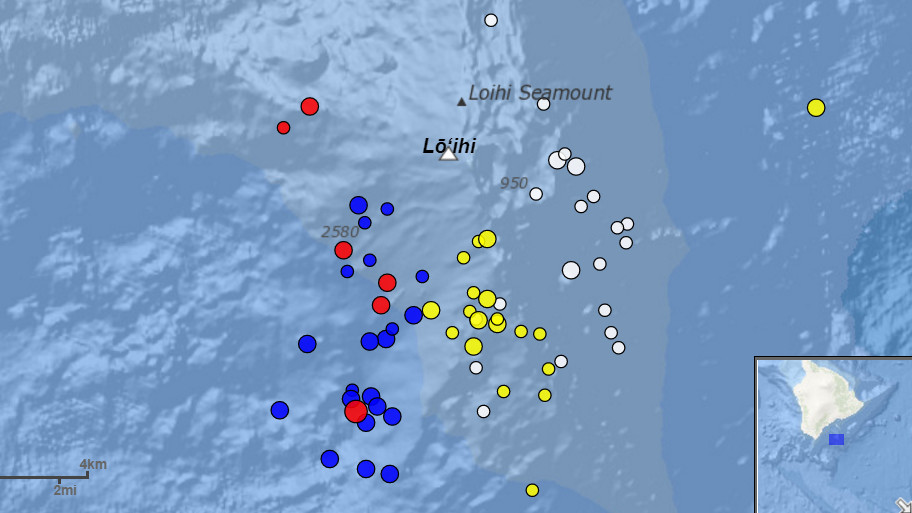 HAWAII ISLAND - Less than a week after scientists published a Volcano Watch article on the subject, seismic activity upticks.

(BIVN) – Earthquakes are on the uptick at the Hawaiian Island chain’s youngest and still submarine volcano.

Lō‘ihi, centered 24 miles southeast of Pāhala in Hawai‘i County’s Ka‘ū District, has been home to recent increases in seismic activity. And in the last two days, the number of earthquakes recorded at the seamount has doubled the number logged over the last 2 to 4 weeks.

The increase in seismicity was the subject of a recent USGS Hawaiian Volcano Observatory Volcano Watch article. The scientists have been tracking earthquake activity at Lō‘ihi from land-based seismic stations for over 50 years. The article was published on June 22.

Indeed, since the end of February 2017, HVO seismic analysts have noted a slight uptick in the numbers of earthquakes near Lō‘ihi. From January 2015 through February 2017, there was, on average, one located Lō‘ihi earthquake per month. Since then, the rate of earthquakes has gradually increased. This month alone (as of June 22), there have been 51 located earthquakes in the Lō‘ihi region.

Without permanent seismic stations at Lō‘ihi—because the highest point of the volcano is still a kilometer (0.6 mi) under water—it is not possible to locate earthquakes there as accurately as we can at Kīlauea or Mauna Loa. However, we can state that the June 2017 earthquakes appear to be clustered roughly 10–12 km (6–7 mi) below sea level and extend from beneath the summit region of Lō‘ihi to the south.

Interestingly, the roughly 170 earthquakes located in the area of Lō‘ihi between 2010 and 2016 occurred away from the summit region. They were primarily beneath the northern flanks of Lō‘ihi, and extended to significantly greater depths below the volcano. The significance of this difference is unclear.

As early as 1952, HVO scientists interpreted occasional earthquake swarms in the Lō‘ihi region as reflecting active volcanism there. In fact, the earthquakes were key to recognizing that the seamount is actually an active volcano!

Earthquake activity alone does not conclusively indicate that Lō‘ihi is erupting. But the locations of recent earthquakes directly beneath the volcano’s summit region plausibly suggest magmatic or volcanic origin, such as adjustments within the magma reservoir or volcanic edifice. We would, however, expect to see many more earthquakes associated with an eruption.

The most recent confirmed eruption of Lō‘ihi occurred in 1996. That year, an energetic earthquake swarm began in July and quickly intensified, motivating a scientific expedition to Lō‘ihi to seize an unprecedented opportunity to possibly observe a submarine eruption. Thousands of earthquakes, including over a dozen with magnitudes greater than 4.5, were recorded from beneath the summit and south flank of the volcano between July and September 1996.

Subsequent viewing and mapping of the Lō‘ihi summit region showed that, consistent with magma movement from beneath the summit area, a significant portion of it had collapsed. Fresh pillow lavas and glassy fragments collected during submersible dives also confirmed the occurrence of an eruption.

Because Lō‘ihi is still so deep beneath the ocean’s surface, the USGS regards Lō‘ihi as a low- to very low-threat volcano. Thus, there are no immediate plans for additional monitoring instruments and our views of Lō‘ihi for the foreseeable future will be strictly seismological. 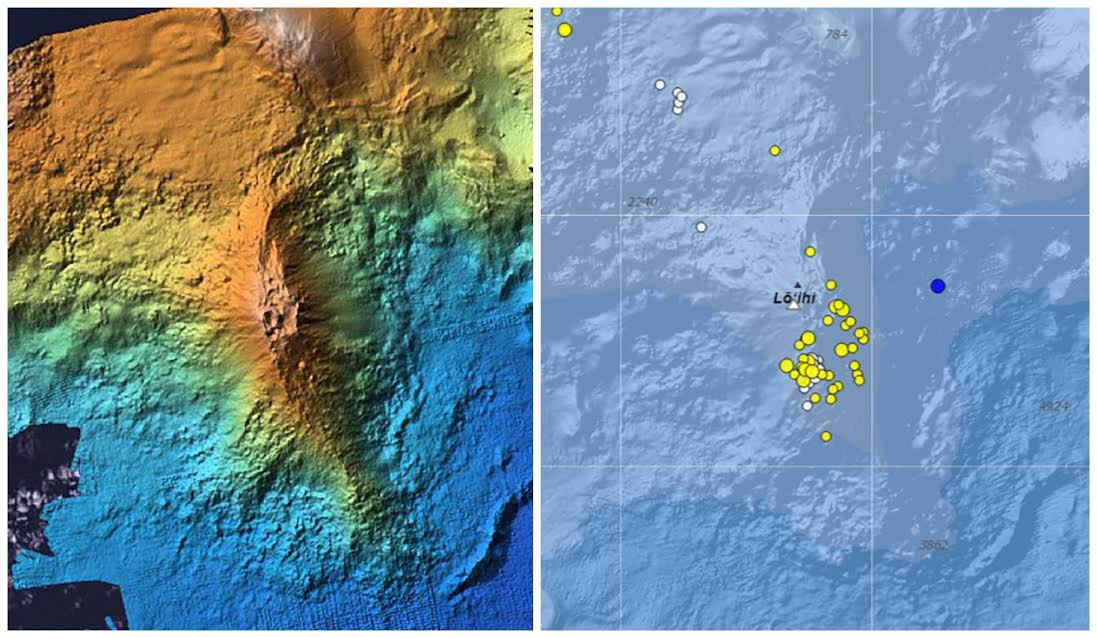 (FROM THE JUNE 22 VOLCANO WATCH) Left: A color-shaded bathymetry map of Lō‘ihi, a submarine volcano located southeast of the Island of Hawaiʻi. The summit region is marked by pit craters formed in connection with an eruption and earthquake swarm in July–August 1996. Right: Earthquakes in the vicinity of Lō‘ihi (same area as bathymetry map) located by the USGS Hawaiian Volcano Observatory during a 30-day period ending June 22, 2017. Locations of the earthquakes are shown with dots; size indicates magnitude and color indicates time (blue represents earthquakes within two days of June 22, yellow within two weeks, and white within four weeks). For example, the blue dot east of Lō‘ihi was a magnitude-2.3 earthquake that occurred on June 22.

Today, two of the earthquakes measured at Lō‘ihi were a Magnitude 3.0 and 3.1, with several more having occurred over the last two days measured between Magnitude 2.9 and Magnitude 1.9.

It’s not known when Lō‘ihi will breach sea level, scientists say. They speculate that with a growth rate of a little over 16 feet per one thousand years, it will take as much as 200,000 years to reach the ocean surface.