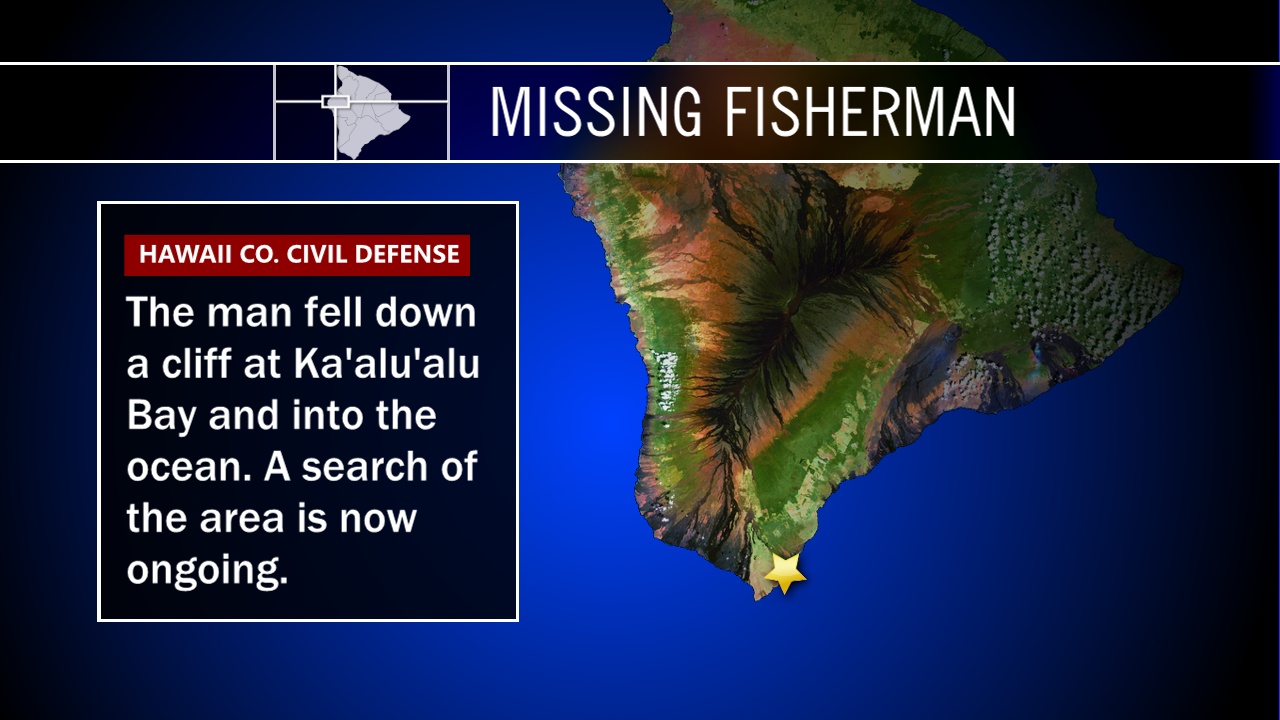 KA'U, Hawaii - The U.S. Coast Guard is searching for the man after he fell off a cliff and into the ocean.

UPDATE (6:50 p.m.) – According to fire officials, the missing fisherman has yet to be found. Search efforts resumed today at first light by county fire personnel and the U.S. Coast Guard. “HFD personnel deployed ground teams who searched shoreline areas and dive teams who searched water surrounding victims point of entry,” a fire dispatch stated. “HFD chopper conducted a grid search of the surrounding ocean area up to 3 miles out as well as coastline. Coast guard resources concentrated search efforts beyond 3 miles out to sea. HFD resources will suspend search at dark and resume at first light tomorrow. Coast Guard will maintain a presence overnight with their cutter.”

(BIVN) – Rescue crews on Monday were searching for a man in the water in the vicinity of Ka’alu’alu Bay in th Ka’u district of Hawaii Island. The search continues to today.

Missing is Shane Roena, 48-years-old, according to the U.S. Coast Guard. The Hawaii County Fire Department says he fell down a cliff and into the ocean.

Roena was reportedly last seen wearing green and red shorts and was not wearing a shirt, USCG says. He is 6 feet 2 inches tall and approximately 180 lbs.

The search was called off due to night fall and is resuming at first light.

Anyone with information about the location of Roena is asked to call Coast Guard Sector Honolulu command center at 808-842-2600.

An MH-65 Dolphin helicopter crew from Coast Guard Air Station Barbers Point is currently searching the area and the crew of the Coast Guard Cutter Galveston Island, homeported in Honolulu, is en route to assist in the search.

Watchstanders at the Sector Honolulu command center received a relayed 911 emergency call from dispatchers shortly after 6 p.m., stating Roena’s 10-year-old son had witnessed him fall into the water while trying to clean a cooler and he lost sight of him shortly after. The two were reportedly out fishing.

Two helicopter crews from the Hawai’i Fire Department conducted initial searches of the area but did not locate Roena. His son was airlifted from the rocky shoreline by HFD and brought to a designated landing zone where he was picked up by his grandmother.

Weather conditions on scene are reported as 40 mph winds, seas to 8 feet with a 3-foot swell.

More information will be released once it becomes available.