PACIFIC OCEAN - Category four Hurricane Fernanda could get even stronger as it heads towards the Central North Pacific. 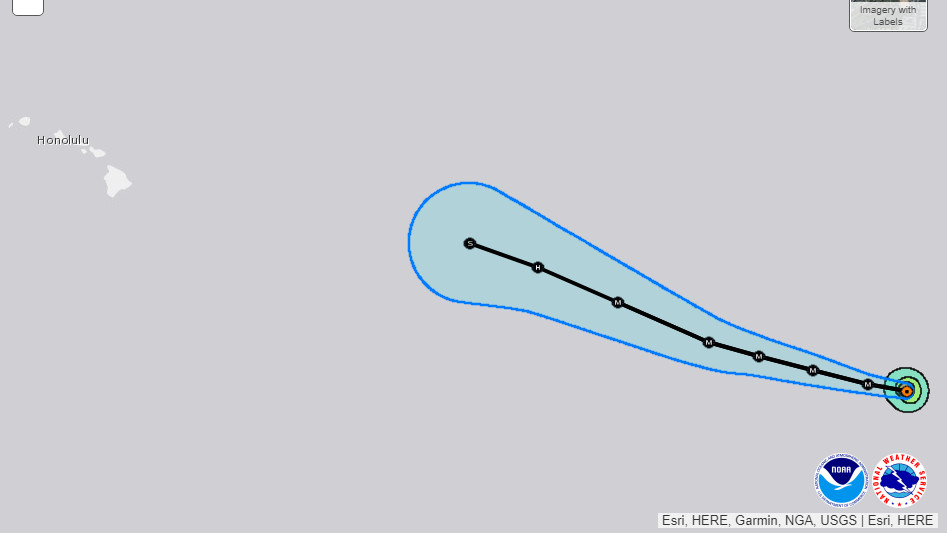 (BIVN) – Hurricane Fernanda is gaining strength 2,360 miles east southeast of Hilo, and is maintaining a course for the Central North Pacific.

“It is too early to know what effects, if any, Hurricane Fernanda will have on our island or state,” a Hawaii County Civil Defense message stated at 3 p.m. Friday. “You are assured, this system will be monitored. Should any threat develop, you will be informed.”

Fernanda, presently a Category Four hurricane, is still expected to strengthen over the weekend before starting to weaken early next week. 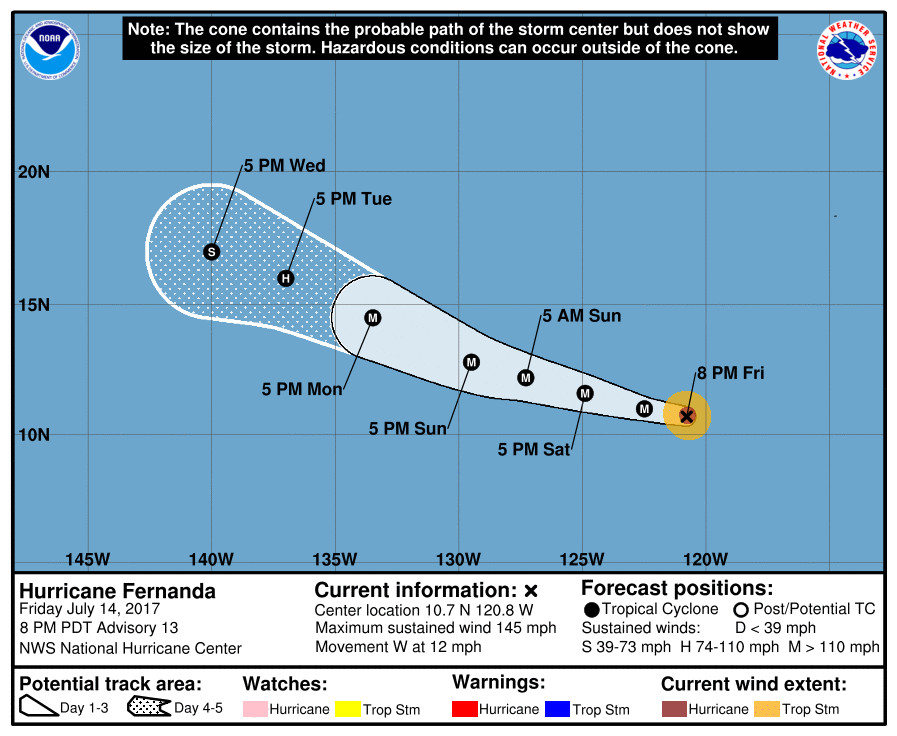 Fernanda continues to have a very impressive appearance in satellite imagery, with a 10 n mi wide eye well embedded in a symmetric central dense overcast. The hurricane also has good outflow in all directions and outer convective bands in all quadrants except the northwest. Subjective satellite intensity estimates from TAFB and SAB are now 127 kt, and recent estimates from the CIMSS Advanced Dvorak Technique are now 120 kt. Based mainly on these data, the initial intensity is increased to 125 kt.

The initial motion is now 270/10. The track forecast philosophy remains the same as earlier, as a mid-level subtropical ridge to the north of Fernanda should induce a generally west-northwestward track for the next several days. Some decrease in forward speed is likely late in the forecast period when the tropical cyclone nears a weakness in the ridge. The new track forecast is almost identical to the previous forecast and lies near the various consensus models.

Recent microwave imagery indicates rainbands about 30-40 n mi from the center that are likely the start of an outer eyewall and an eyewall replacement cycle that will end the current intensification. The new intensity forecast allows for 6-12 h more strengthening before this happens. From 12-48 h, Fernanda should remain in a low shear environment over very warm sea surface temperatures. The intensity forecast calls for a slow weakening during this time as a reflection of the guidance. However, fluctuations in intensity caused by eyewall cycles are likely to occur, and it would not be surprising if a second round of strengthening occurs if a cycle can finish before Fernanda leaves the very warm water. After 48 h, the hurricane will move over decreasing sea surface temperatures, and this should result in a steady weakening. Overall, the new intensity forecast lies at or above the upper edge of the intensity guidance.