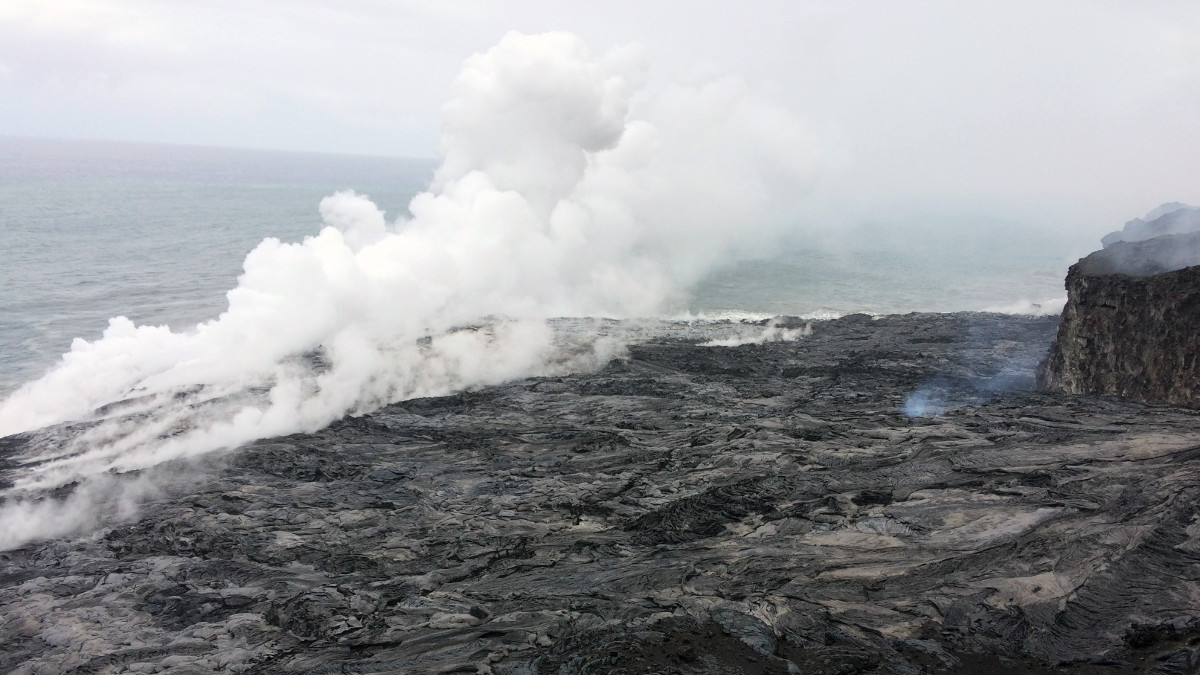 HAWAII VOLCANOES NATIONAL PARK - Federal agencies are warning visitors to the Kamokuna ocean entry, whether by foot or by boat, that a delta collapse could be imminent.

(BIVN) – Several large cracks portend a possible collapse of the lava delta at the Kamokuna ocean entry, warn scientists with the USGS Hawaiian Volcano Observatory, prompting an advisory from the U.S. Coast Guard as well.

The cracks on the delta are running parallel to the coastline and span the width of the delta. These cracks increase the likelihood of a large delta collapse, USGS reports.

The scientists also recorded a time-lapse sequence showing subsidence of the lava delta at the ocean entry. The video, posted above, “shows a sequence of 8 time-lapse photos – one photo per day from July 6 to July 13, 2017,” USGS says. “The sequence shows the front of the delta subsiding, and cracks running parallel to the coast widening, over the 8-day time period. The short movie is looped numerous times to help viewers detect these subtle changes in the delta, which are reminders that lava deltas are unstable features that can collapse without warning.”

The cracking delta instigated a reminder from the U.S. Coast Guard, which stated in a media release that it continues to enforce “the temporary Kamokuna Lava Delta Safety Zone for the navigable waters surrounding the Kilauea Volcano active lava flow entry into the Pacific Ocean.”

“For mariners without prior limited entry approval, the safety zone encompases all waters extending 300 meters (984 feet) in all directions around the entry of the lava flow into the ocean and remains in effect,” said Lt. Cmdr. John Bannon, Coast Guard Sector Honolulu, waterways management lead. “All waterway users should be aware of this new delta formation, the potential for a significant collapse with little or no warning and the natural hazards associated with such an event.”

The USCG relied further on USGS for the rest of the media release:

According to the Hawaii Volcano Observatory, large and dense fragments ejected during delta collapses can be thrown in all directions from the point of collapse, including out to sea. Based on a review of nearly 30 years of delta collapse and ejection distance observations in the Hawaii Volcano Observatory records, a radius of 300 meters was determined as a reasonable minimum high hazard zone around a point of ocean entry.

Enforcement of the safety zone began March 28. Lava delta growth and subsequent lava bench threat of collapse could cause an increase in hazardous conditions for mariners. The ocean entry hazards result in lava delta instability and fracturing from lava accumulation built on unconsolidated lava fragments and sand. This loose material can easily be eroded away by surf, causing the new land and existing sea cliff to become unsupported and slide explosively into the sea. Getting too close to the lava can result in serious injury or death.

As long as lava enters the ocean, further sea cliff degradation, delta construction and hazardous conditions relating to the collapse are likely to occur. These collapses occur with little to no warning and cannot be predicted. The Coast Guard took action to ensure public safety because of the aforementioned dangers.

The Coast Guard says the temporary Safety Zone is set to expire in September 28. “Notification of any changes to the waterway safety zone enforcement will be provided to the public if the Safety Zone is changed or deactivated earlier than anticipated,” USCG wrote.

The Coast Guard recently promulgated a Notice of Proposed Rule Making to establish a permanent Safety Zone for this region. Feedback was solicited from the public on this rule making process, and did not find much support from boat tour operators, who say they provide guests a safe experience near the ocean entry.