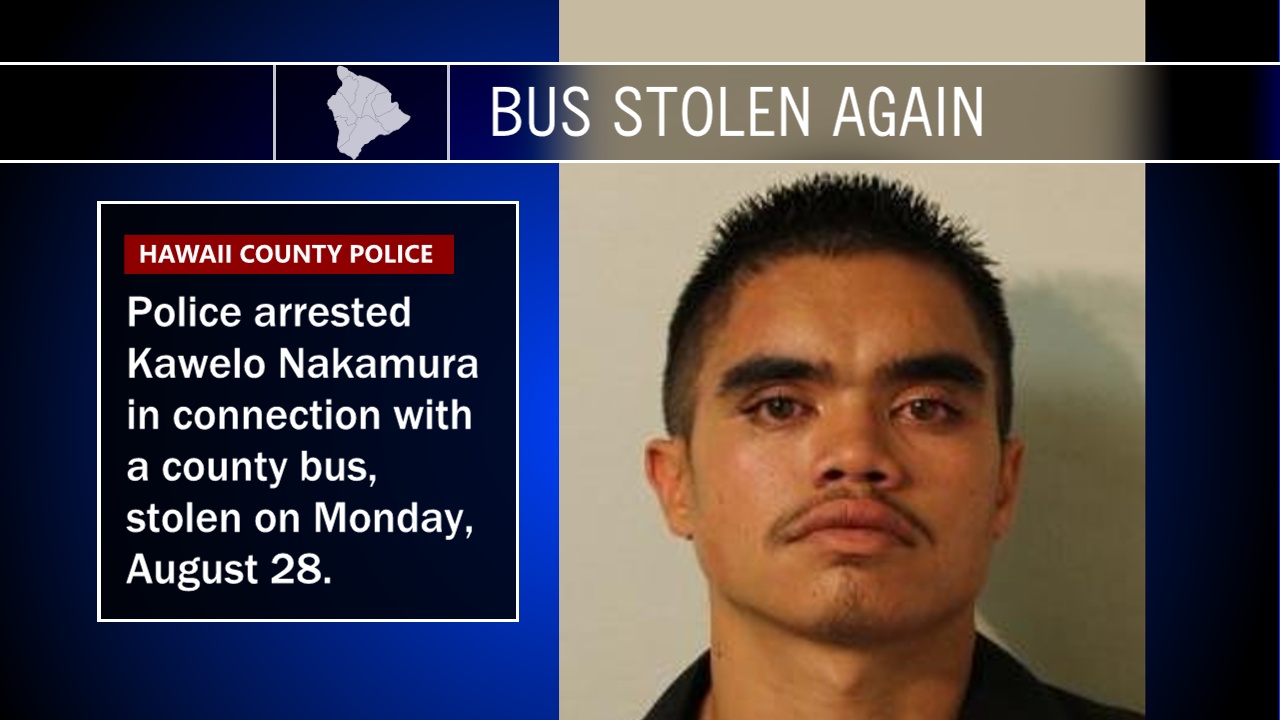 HILO, Hawaii - Kawelo Nakamura was taken into custody and transported to the Hilo cellblock while detectives with the Criminal Investigation Section continue the investigation, police say.

(BIVN) – 21-year-old Kawelo Nakamura, already facing charges in connection with a stolen county bus on August 5, has again been arrested after police say a second county bus was stolen and recovered on Monday, August 28.

Police detailed the latest incident in a media release issued the same day:

At 1:36 a.m., Monday morning (August 28), county employees reported that the lock on the gate to the County of Hawaiʻi Mass Transit base yard was cut and the gates were found opened. Reports received indicated that a 42-passenger bus was taken from the base yard and that may have been seen heading in the Hāmākua direction over the Wailuku Bridge on Highway 19 and later on Queen Ka’ahumanu Highway near Mauna Lani.

At 6:24 a.m., police briefly pursued the bus after it was observed traveling into Hilo on Bayfront Highway, but the pursuit was discontinued in the interest of public safety. At 6:45 a.m., the bus was located behind the Walter Victor Stadium where the suspect, Kawelo Nakamura was taken into custody and transported to the Hilo cellblock while detectives with the Criminal Investigation Section continue the investigation.

This video report was filed after Nakamura’s first court appearance:

At the time, Judge Diana Van De Car granted Nakamura supervised release, with conditions. Nakamura was scheduled to be back in court on August 24 for a preliminary hearing. Court records show Nakamura was indicted that same day and a Bench Warrant was issued on August 25.

Police say anyone who may have witnessed the August 28 incident or have any other information about it is asked to call the Police Department’s non-emergency line at (808) 935-3311 or Detective Todd Pataray of the Area I Criminal Investigation Section at (808) 961-2382 or Todd.Pataray@hawaiicounty.gov.

Tipsters who prefer to remain anonymous may call the island-wide Crime Stoppers number at (808) 961-8300 and may be eligible for a reward of up to $1,000.00. Crime Stoppers is a volunteer program run by ordinary citizens who want to keep their community safe. Crime Stoppers does not record calls or subscribe to any Caller ID service. All Crime Stoppers information is kept confidential, police say.