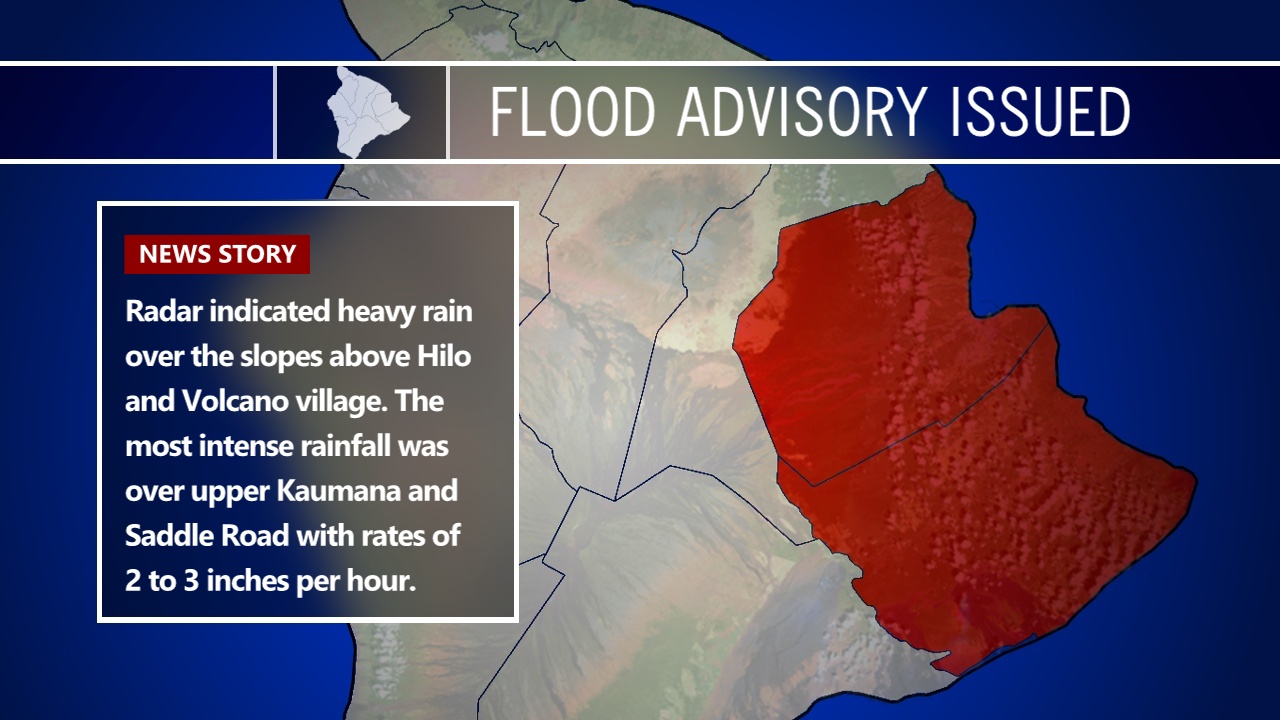 At 4:46 p.m. HST, radar and rain gages “indicated that rainfall has eased over the South Hilo and Puna Districts but stream gages on Wailuku River and Honolii Stream show that runoff levels remain elevated,” the National Weather Service reported. “Rainfall and runoff should continue to decrease over the next couple of hours.”

UPDATE (4:20 p.m. HST) – At 3:39 p.m. HST, radar indicated heavy rain continuing over the slopes above Hilo, the National Weather Service reported. The area of rain has shifted southeast and has started to affect the Waiakea Uka area with rain rates of about 1 to 2 inches per hour. Heavy rain is also affecting Stainback Highway and the upper sections of Mountain View and Glenwood, forecasters say.

(BIVN) – The National Weather Service in Honolulu has issued a Flood Advisory for East Hawaii until 5 p.m. HST.

At 2:01 p.m. HST, forecasters say radar indicated heavy rain over the slopes above Hilo and Volcano village. The most intense rainfall was over upper Kaumana and Saddle Road with rates of 2 to 3 inches per hour. Additional rainfall is expected to develop along the slopes of the South Hilo and Puna Districts for the next several hours.

“Stay away from streams, drainage ditches and low lying areas prone to flooding,” forecasters warn. “Rainfall and runoff will also cause hazardous driving conditions due to ponding, reduced visibility and poor braking action.”

Southeasterly winds ober the Big Island were expected to bring “increasing humidity and moisture from the tropics allowing for heavier showers this afternoon and continuing tonight, mainly over the Kau, Puna, and Hilo districts.”

The distant rumble of thunder could even be heard from Hilo this afternoon.

Starting Monday, Hawaii Island will be under a Flash Flood Watch and a High Wind Watch for the summit areas. A front approaching from the northwest, forecasters say.

This is what the National Weather Service in Honolulu wrote at 9:45 a.m. this morning:

As the front closes in on Kauai tonight and Monday, a moisture convergence band is expected to form over Oahu, Maui County, and the Big Island. The near surface convergence, deep tropical moisture, and island terrain will likely produce heavy rain, isolated thunderstorms, and the potential of flash flooding over Oahu, Maui County, and the Big Island Monday through Tuesday. A flash flood watch is in effect starting Monday morning and continues through Tuesday afternoon. Sufficient deep layer shear, as well as turning of the winds with height in the lower levels, suggest that some of those isolated thunderstorms could be strong or severe along and ahead of the front. Strong winds across the Big Island summits are expected Monday night and a high wind watch is in effect. Some wintry weather is also possible over the Big Island summits with temperatures approaching freezing monday night.

Kona winds (southerly) will increase Monday with some potential for gusty winds accelerating down the terrain into windward areas of Kauai and Oahu. The front will push over Kauai Monday night bringing moderate rain with the heaviest falling over the north and west facing slopes of the Garden Isle. The front will push the aforementioned convergence band slowly eastward, likely pushing east of Oahu Tuesday, and then east of the Big Island sometime Wednesday. North winds behind the front will bring cool and dry conditions to Kauai Tuesday, and Oahu Tuesday night; while the convergence band keeps things moist and humid over Maui County and the Big Island.

High pressure nosing in from the northwest is expected to push the convergence band east of the Big Island Wednesday with dry north to northeast flow expected for the second half of the week.