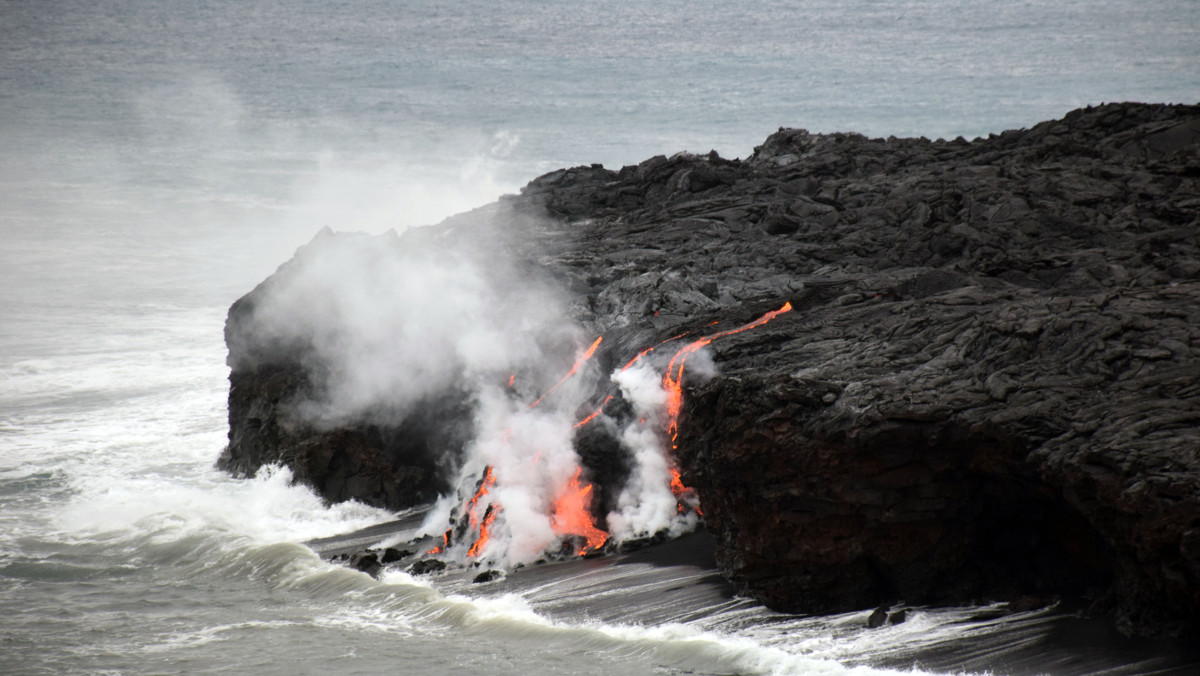 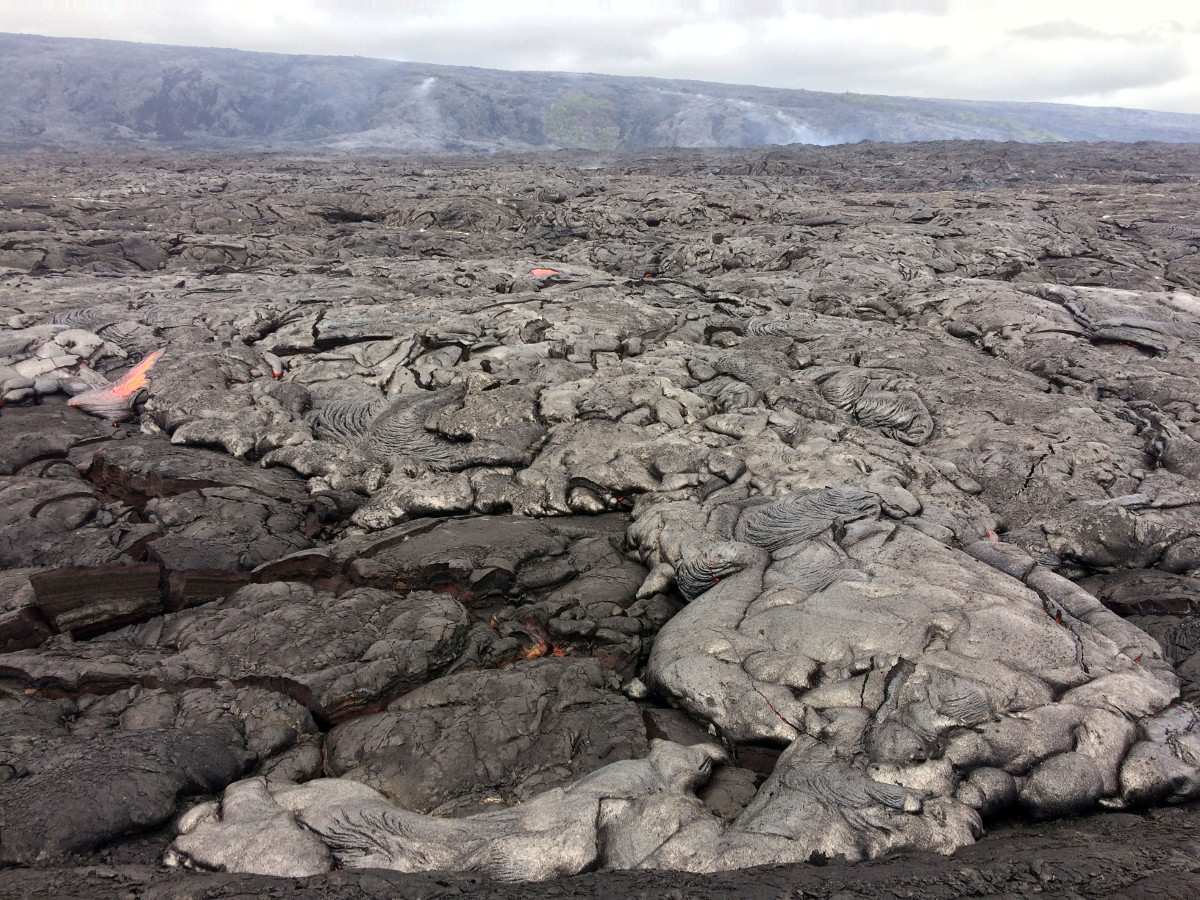 (USGS) Breakouts at the flow front were mostly sluggish and spread out pāhoehoe toes; a few larger breakouts were short-lived. Other areas of surface breakouts were also found farther upslope, produced by the June 26 breakout, visibly degassing to the right of the green kipuka on the pali.

(BIVN) – Kīlauea Volcano continues to erupt at its summit and from the Puʻu ʻŌʻō vent on its East Rift Zone, while the episode 61g lava flow is still entering the ocean at Kamokuna and producing scattered surface flow activity, scientists say.

The USGS Hawaiian Volcano Observatory posted a few new photographs of the lava as it neared the ocean on its website. They reported the closest active surface flows mapped by HVO geologists was less than a mile from the emergency road. 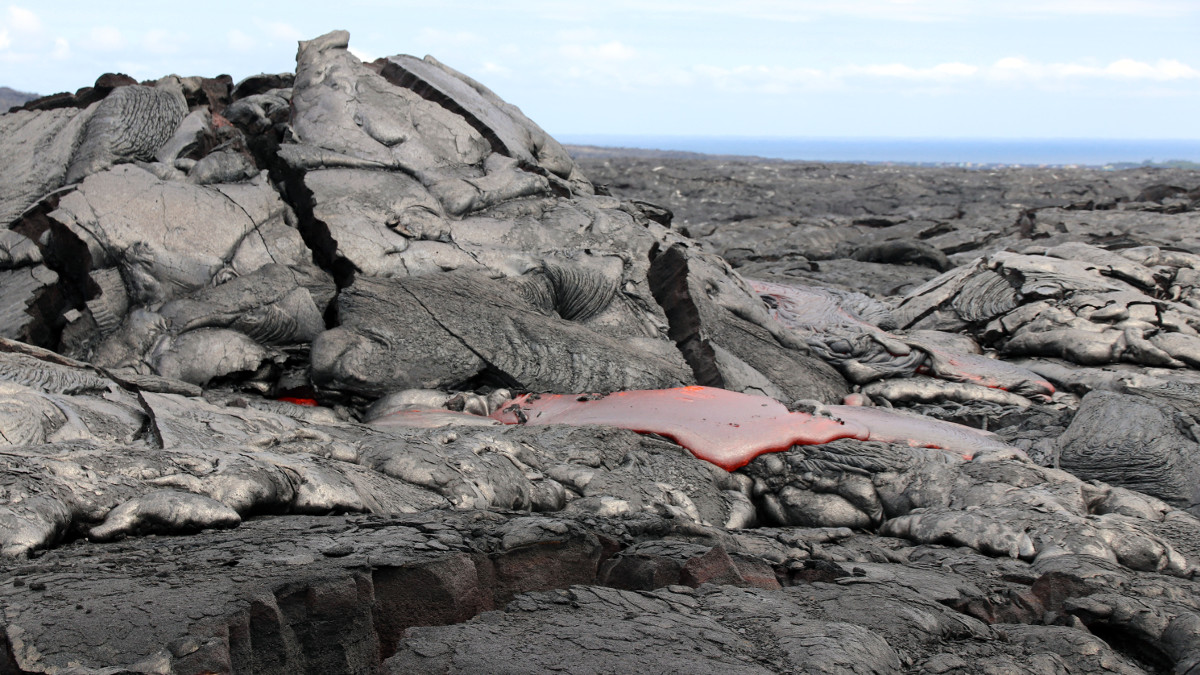 (USGS) A thin fluid sheet of pāhoehoe flowed from beneath the fractured crust of a tumulus (an inflated flow surface that is pushed upward) and quickly filled in nearby low areas. This surface flow, which is from the June 26 breakout, was close to the base of the pali. The tumulus pictured here is roughly 3 m (10 ft) tall.

These flows pose no threat to nearby communities at this time, however dangers remain on the flow field, especially by the Kamokuna ocean entry. USGS repeated this warning to visitors:

The ocean entry is a hazardous area. Hazards include walking on uneven, glassy lava flow surfaces and around unstable, vertical sea cliffs. Venturing too close to an ocean entry on land or the ocean exposes you to flying debris from sudden explosive interaction between lava and water. Also, the lava delta is unstable because it is built on unconsolidated lava fragments and sand. This loose material can easily be eroded away by surf, causing the new land to become unsupported and slide into the sea. In several instances, such collapses have also incorporated parts of the older sea cliff. Additionally, the interaction of lava with the ocean creates a corrosive seawater plume laden with hydrochloric acid and fine volcanic particles that can irritate the skin, eyes, and lungs.