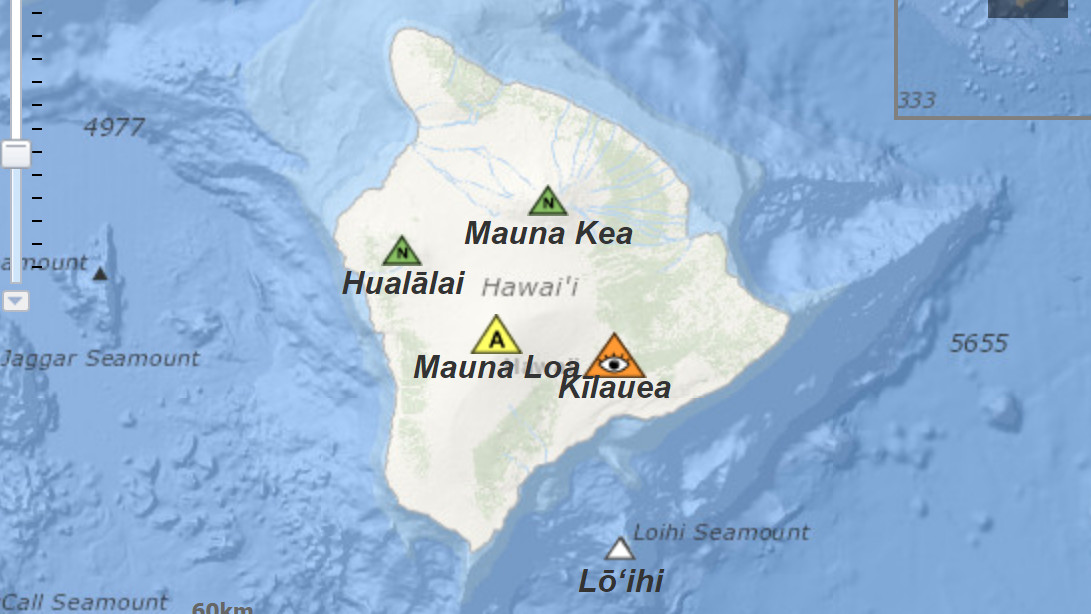 Volcanic hazards map posted on the front page of the USGS HVO website. 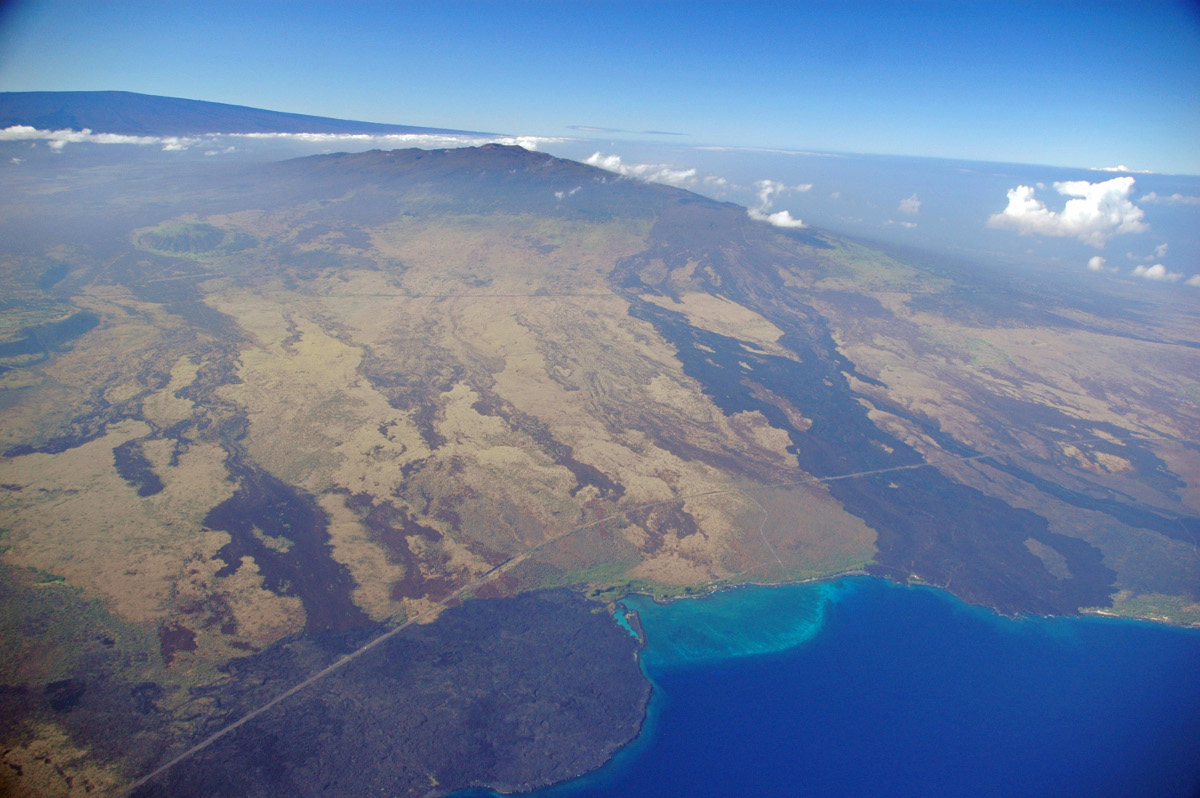 Hualālai (center) and Mauna Loa (left background), two of the four active volcanoes on the Island of Hawaiʻi, are ranked as “high threat” and “very high threat” volcanoes, respectively. Kīholo Bay (foreground) is flanked on the north (left) by a lava flow erupted from Mauna Loa in 1859 and on the south by the Ka‘ūpūlehu flow erupted from Hualālai around 1800. Photo courtesy of USDA Forest Service.

Careful readers of the USGS Hawaiian Volcano Observatory (HVO) website might have noticed mention of “threat rankings” in the lower right corner of our new home page. There, you’ll find a listing of Hawaii’s active volcanoes—Kīlauea, Mauna Loa, Hualālai, Haleakalā, Mauna Kea, and Lōʻihi—with their associated rankings, which range from “very high threat potential” to ”moderate threat potential,” and, in the case of Lōʻihi, “not ranked.”

What exactly do these rankings mean?

A little more than 10 years ago, the U.S. Geological Survey (USGS) undertook a systematic review of the Nation’s 169 geologically young—defined as less than about 12,000 years since the last eruption—and potentially active volcanoes to determine which ones posed the greatest danger to people and infrastructure. Assignments were based on the specific type and frequency of known and expected eruptions; proximity to population centers or key industries, airports, or other critical facilities; and other factors. At the same time, existing monitoring networks for each volcano were evaluated for their adequacy with a careful inventory of instrumentation in place to help detect signs of unrest and eruption.

The result was a publication that ranked all 169 volcanoes by their threat level—from very high to very low (https://pubs.usgs.gov/of/2005/1164/). The authors also listed the volcanoes that were ranked most threatening and needed to be prioritized for additional monitoring equipment. An outgrowth of this was the National Volcano Early Warning System (NVEWS), a proposed national plan to improve monitoring at U.S. volcanoes.

In Hawaii, it may not surprise you that Kīlauea and Mauna Loa, with their frequent eruptions and thousands of residents living on their flanks, are considered “very high threat” volcanoes. Accordingly, they are the volcanoes on which the USGS and HVO have focused instrumental monitoring and scientific studies. While our monitoring networks on these two volcanoes are quite extensive, there are gaps in coverage that we are attempting to fill as resources allow.

Hualālai Volcano is considered “high threat” based on its much less frequent eruptions (current data suggest long term eruption recurrence of one eruption every few hundred years). HVO maintains a single seismometer and GPS receiver atop Hualālai, but we are still able to track earthquakes at this volcano because of good station coverage on the adjacent Mauna Loa and Mauna Kea volcanoes. HVO also completes a GPS campaign survey of Hualālai every 2-3 years. Nonetheless, because of the number of residents who could be in harm’s way during a future eruption, Hualālai is considered a high priority for additional monitoring instrumentation.

“Moderate threat” volcanoes include both Mauna Kea on Hawaiʻi and Haleakalā on Maui. There are scattered seismic stations and a single real-time GPS site on Mauna Kea, and one of each on Haleakalā. HVO also completes a GPS campaign survey of Haleakalā every five years.

Lōʻihi is not ranked, because it is a deep submarine volcano that poses an extremely low risk to people and infrastructure. Submarine volcanoes were not considered in the NVEWS analyses, in part because so little is known about them.

Now, more than ten years after its release, the initial NVEWS assessment is being revised. This revision takes into account the current state of monitoring instrumentation and techniques, principally at volcanoes in Alaska and on the mainland, as well as new geologic information about past and expected future eruptive activity at some volcanoes. We do not anticipate any changes to the threat rankings of Hawaiian volcanoes.

The USGS and HVO continually seek ways to improve and expand our monitoring of volcanoes that pose a threat to Hawaii. With funds from the American Recovery and Reinvestment Act of 2009, HVO has already upgraded many of our monitoring sites to improve performance and reliability.

For more information about NVEWS, please visit this website.