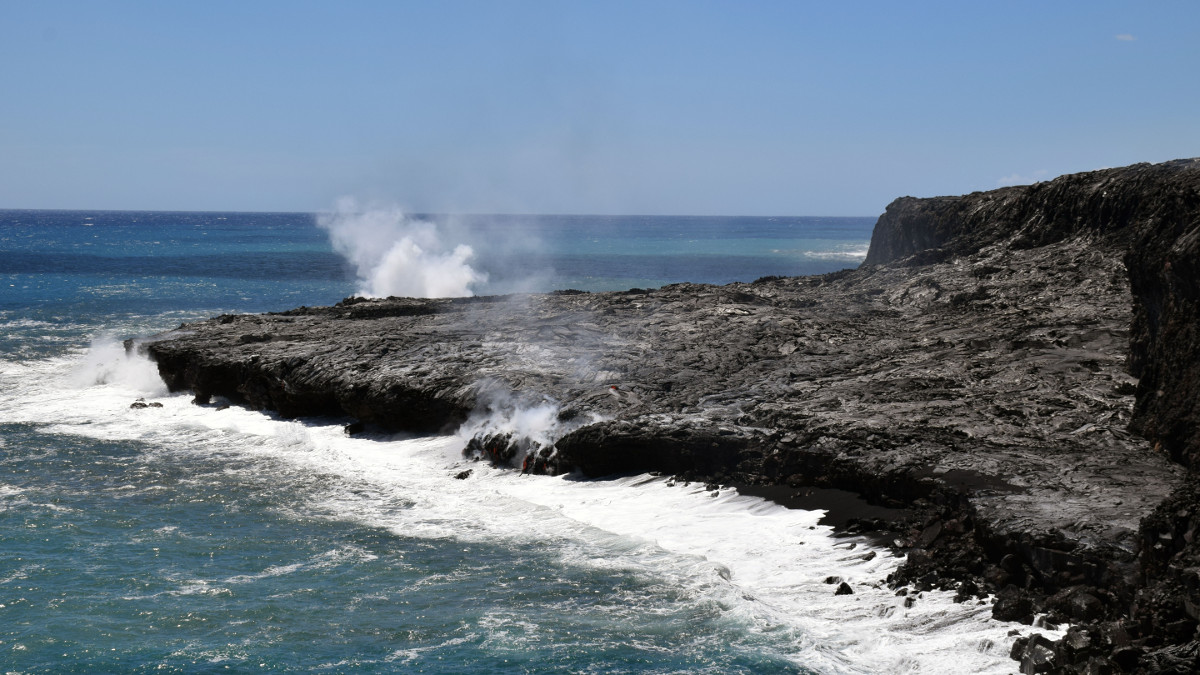 (BIVN) – No ocean-entry plume was evident Thanksgiving morning in U.S. Geological Survey Hawaiian Volcano Observatory webcam images looking toward the Kamokuna delta, scientists say, but there is still lots to talk about.

This week’s Volcano Watch article, written by USGS HVO scientists, delves into the semantics of geology as it relates to the new land created at the lava ocean entry.

From the Volcano Watch:

What do we call new land at Kīlauea Volcano’s ocean entries?

If you follow Kīlauea Volcano’s ongoing East Rift Zone eruption, you are likely aware that when lava enters the ocean, it often forms new land. But what is this new land called?

A few years ago, “bench” was the term commonly used for the accumulation of lava at an ocean entry. But geologists have moved away from that word, because the geologic definition of a bench does not agree with the process by which new land forms when lava enters the sea.

“Lava delta” is now the accepted geologic characterization. But, because the word “bench” was used for so long, it can be hard to transition to a different name for the new land formed at an ocean entry. As we all know, bad habits are hard to break.

The purpose of this Volcano Watch is to help resolve any confusion about what new land at an active ocean entry should be called, and to describe the processes by which lava deltas form and evolve.

So, why is “bench” the wrong word? First and foremost, to geologists, benches are erosional features, whereas deltas are depositional features, formed by the accumulation of new material.

Coastal benches are nearly horizontal terrains commonly formed by wave erosion over long periods of time. These flat and narrow features form at the base of sea cliffs near the high tide mark. In Hawaiʻi, Hanauma Bay is an example of a bench that cut into the southeast wall of a tuff ring (low relief volcanic crater) next to Koko Head on the Island of Oʻahu.

Referring to a lava delta as a “shelf” is another common, but misguided, term that’s used to describe the ocean entry feature. A shelf is a nearly horizontal, shallow ledge of continental crust that extends below sea level off the coast of a land mass. Island shelves can be found off the coast of the Hawaiian Islands as well, but they are generally much larger than lava deltas.

In contrast to the erosional origin of a bench, a lava delta is a depositional feature built by the accumulation of lava near the base of the sea cliff at an ocean entry. To understand this process, picture a river delta, like that of the Mississippi.

River deltas are land areas that protrude from the surrounding coastline near the mouth of a river. They form when alluvium, such as silt and sand, is transported down the river and then deposited where the river enters a larger body of standing or slower-moving water, such as an ocean.

Molten lava insulated in a tube is like a river. It is transported to the coast, where it enters the ocean.

As the approximately 1140-degree Celsius (2080-degree Fahrenheit) lava flows into the ocean, it quickly cools, creating a potentially explosive interaction. Small explosions and surf action break the lava into smaller pieces of rubbly rock and sand, which are then deposited onto the sea floor beneath the ocean entry. The accumulation of this unconsolidated material produces the unstable foundation on which lava deltas are built.

As a lava delta continues to grow, its front can begin to subside, because the increasing weight of the delta causes its rubbly foundation to shift. When a lava delta becomes too heavy, or is undercut downslope, it collapses, either partially or completely. 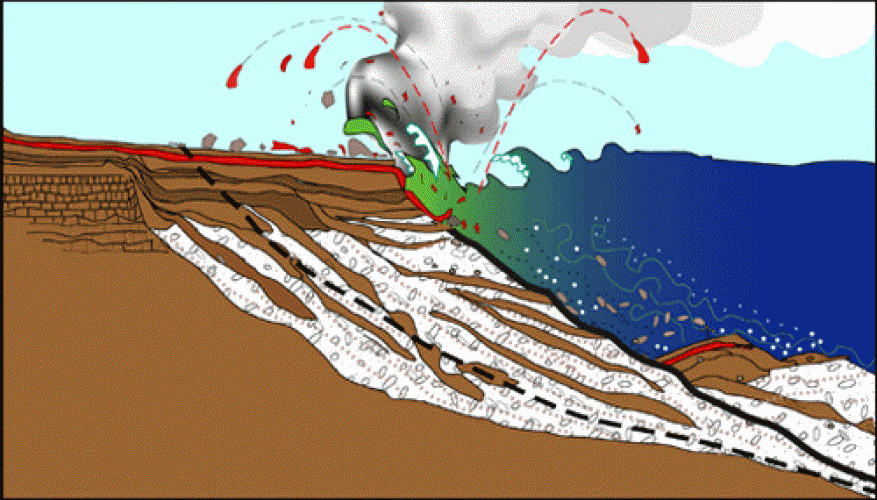 When a lava delta collapses, it can trigger explosions that throw blocks of solid rock and fragments of molten lava both inland and seaward. Lava delta collapses can further undercut the older sea cliff, causing it to collapse as well. So, a seemingly stable sea cliff in the vicinity of an ocean entry is a hazardous area. Other hazards that accompany lava delta collapses include localized tsunami and large waves that can carry scalding seawater inland.

Names say a lot, and in this case the name describes the process by which a lava delta forms. Calling the feature by other names can be misleading. As you enjoy the excitement of lava entering the ocean, we hope you remember to call the new land a lava delta.