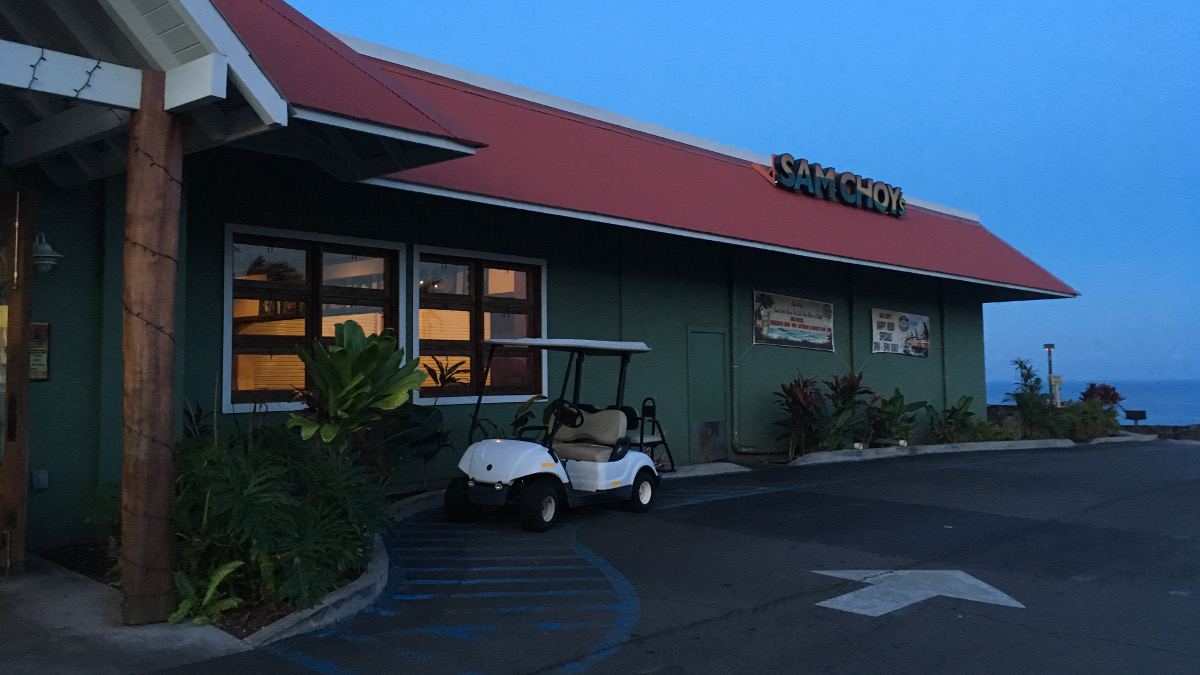 KEAUHOU, Hawaii - The Hawaii State Department of Health (DOH) has issued a Notice of Violation and Order against Kona Daze, LLC with a penalty fine of $13,000.

(BIVN) – The Department of Health has cited Sam Choy’s Kai Lanai restaurant in Keauhou for “intentionally removing the posted yellow ‘Conditional Pass’ placard from their facility and re-posting a green ‘Pass’ placard,” officials say, as well as for “non-compliance with food safety requirements during routine and follow-up inspections.”

Although the restaurant bears the name Sam Choy, the local celebrity chef actually has nothing to do with restaurant. Contacted by phone yesterday, Sam’s wife Carol says the family has not been involved in the Keauhou business for three years. She declined to comment further.

Here is the news release issued by state health officials:

KAILUA-KONA, HI – The Hawaii State Department of Health (DOH) has issued a Notice of Violation and Order against Kona Daze, LLC (dba Sam Choy’s Kai Lani) with a penalty fine of $13,000. Violations include intentionally removing the posted yellow “Conditional Pass” placard from their facility and re-posting a green “Pass” placard, and non-compliance with food safety requirements during routine and follow-up inspections.

Sam Choy’s Kai Lani is located at the Keauhou Shopping Center at 78-6831 Alii Drive, Kailua-Kona. The company has 20 days to request a hearing to contest the notice.

“Placard removal is a serious violation with substantial consequences because this act intentionally places profit above health and safety and compromises the public’s trust and their right-to-know when violations occur during an inspection,” said Peter Oshiro, environmental health program manager. “Since the start of the placarding program in July 2014, we’ve seen good compliance with the food industry; this is only the fifth incident involving tampering with a placard.”

On Jan. 4, 2018, DOH conducted a routine inspection at Sam Choy’s Kai Lani and issued a yellow placard for five major food code violations. A yellow placard is issued if there are two or more major violations observed during an inspection. Major violations are those conditions known to cause foodborne illnesses as recognized by the U.S. Centers for Disease Control and Prevention and the U.S. Food and Drug Administration.

On Jan. 5, the department conducted an inspection in response to an anonymous complaint that the yellow placard posted at Sam Choy’s Kai Lani by a DOH inspector on Jan. 4, had been removed by restaurant staff and replaced with a green placard from a previous inspection. The onsite inspection verified the complaint, and a DOH inspector re-posted the yellow “Conditional Pass” placard and removed the invalid green placard.

According to Hawaii Administrative Rules 11-50-9 (b), only authorized DOH agents may post or remove a color-coded placard indicating the compliance status of a food establishment.

A follow-up inspection on Jan. 8 revealed there were still outstanding issues with improper hand-washing technique, bare-hand contact with foods, improper storage of foods and improper date-stamping of foods to be discarded. An additional follow-up inspection conducted on Jan. 10 found ongoing violations of bare-hand contact with ready-to-eat foods and a violation for failing to adhere to the restaurant’s written procedure for disposition of perishable food out of refrigeration beyond the prescribed time period. A yellow placard will be displayed at the restaurant until all violations have been corrected.

Since the inception of state’s restaurant placarding program in 2014, the DOH’s Food Safety Program has conducted more than 26,000 inspections and issued more than 4,500 Yellow “Conditional Pass” placards for major food safety violations. Of the 4,500 yellow placards issued, only six have resulted in red “Closed” placards due to non-compliance. Hawaii’s restaurants, hotels, retail and food manufacturing industry have embraced the state’s new food safety regulations and earned an impressive 99.8 percent compliance rate.

The DOH Sanitation Branch protects and promotes the health of Hawaii residents and visitors through education of food industry workers and regulation of food establishments statewide. The branch conducts routine health inspections of food establishments where food products are prepared, manufactured, distributed, or sold. The branch also investigates the sources of food borne illnesses and potential adulteration, and is charged with mitigating foodborne outbreaks and/or the prevention of future occurrences. Health inspectors work with business owners, food service workers, and the food industry to ensure safe food preparation practices and sanitary conditions.