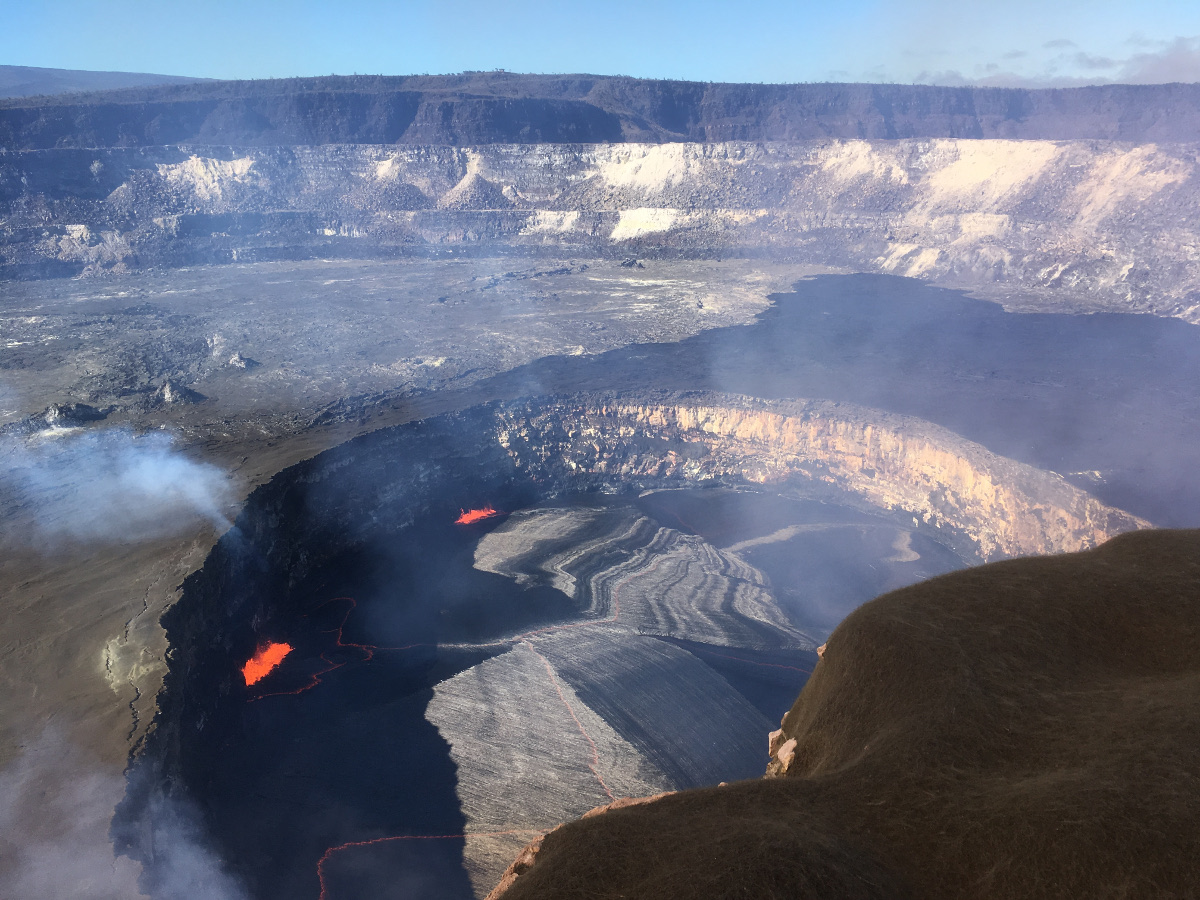 What makes the lava lake within Halema‘uma‘u rise and fall?

About a year ago, the lava lake within Halema‘uma‘u at Kīlauea Volcano’s summit was high enough that spattering on the lake surface was commonly visible from the Jaggar Museum overlook in Hawaiʻi Volcanoes National Park. Although nighttime glow from the lava lake remains impressive, direct views of spattering lava are now less common, because the lake level has gradually dropped since that time.

The lake level is constantly changing, and it fluctuates over many different timescales, from minutes to months. So what causes the lake level to rise and fall?

To answer this question, USGS Hawaiian Volcano Observatory (HVO) scientists have been closely observing the lava lake behavior and making careful, regular measurements of the lake level. A key to understanding the processes that control lake level is to compare the lake level measurements to other monitoring parameters, such as gas emission rates, ground tilt, and seismic tremor. Direct visual observations of lake activity are also essential.

With several years of such data, we can show that the lake level is related to two main factors: magma chamber pressure and gas emission rates.

Magma chamber pressure is the main control on the lava lake level. On a day-to-day basis, the lake level rises and falls in concert with the volcano’s deflation-inflation cycles. Deflation results in lava levels dropping as much as 20 meters (yards) over several days, with inflation leading to lake level rise.

The close correlation between magma chamber pressure and lava lake level means that the lake can be thought of as a “barometer” for the underlying magma chamber.

The lake provides a tool for judging the pressure state of the volcano, which is potentially useful for anticipating future eruptive events on Kīlauea’s rift zones. For example, the lake rose to high levels just before the March 2011 Kamoamoa fissure eruption near Pu‘u ‘O‘o on the volcano’s East Rift Zone.

The pressure of the summit magma chamber also determines the rate at which magma is flowing to Pu‘u ‘Ō‘ō on the East Rift Zone. Higher lake levels in Halema‘uma‘u normally mean elevated lava supply rates at the Pu‘u ‘Ō‘ō vent, and potentially more vigorous lava flows. So tracking the lake level can be another tool for forecasting lava flow hazards on the East Rift Zone.

Gas emission rate is the other main control on the Halema‘uma‘u lava lake level. Increases in the gas emission rate from the lake relate to increases in the amount of spattering on the lake surface. Releasing more gas from the lake results in a slight drop in lake level, normally of a few meters (yards). Unlike the lava level changes due to magma chamber pressure, these gas-driven changes normally occur over much shorter time periods, ranging from minutes to hours.

The level of the Halema‘uma‘u lava lake is a simple indicator of the pressure state of Kilauea’s magma chamber, and the lake provides a “window” for peering into the volcano’s interior. The lake has provided another useful tool to add to HVO’s monitoring toolbox.

Speaking of Halemaʻumaʻu, you’re invited to attend a Volcano Awareness Month presentation on Kīlauea Volcano’s summit eruption on Jan. 16 in Hawaiʻi Volcanoes National Park. On Jan. 17, a “talk story” event focused on Mauna Loa will be held in the Ocean View Community Center. The Volcano Awareness Month schedule and program details are posted on HVO’s website, or you can email askHVO@usgs.gov or call 808-967-8844 for more info.