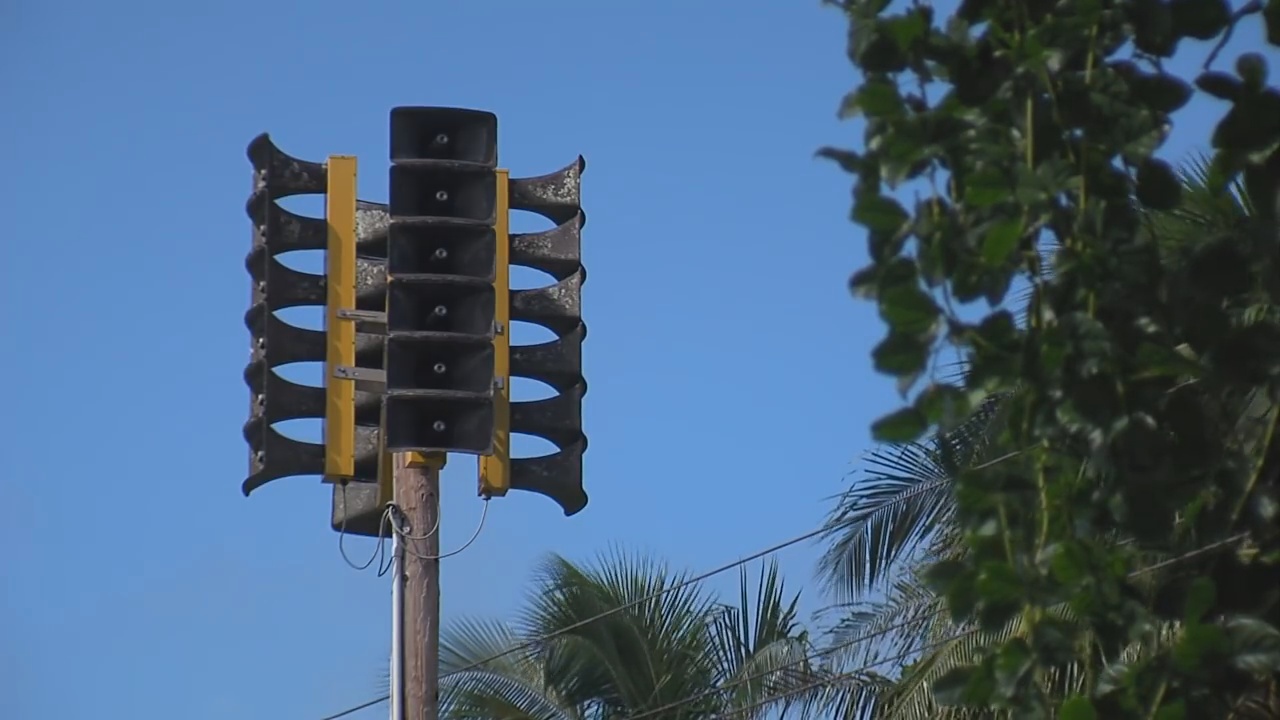 (BIVN) – Jim Albertini, a peace activist with the Kurtistown-based Malu ‘Aina Center for Non-violent Education & Action, says the only shelter is peace when it comes to the threat of nuclear war.

“I’m here to offer a citizen’s response to the growing threat of nuclear war and Hawaii’s monthly nuclear attack scare siren test,” Albertini told the Hawaii County Council at a recent committee hearing. “We say ‘no nukes, no war, no need sirens.’ The only shelter is peace.”

The state announced the go-ahead for its monthly test of the Outdoor Warning Siren System on Thursday, February 1st. The test includes the one-minute Attack Warning Signal tone that follows the initial Attention Alert Signal.

The test comes as the fallout continues from the false missile alert notification that was transmitted on January 13, earning state emergency officials widespread criticism. Hawaii Emergency Management Agency director Vern Miyagi resigned, and the employee who triggered the false alert was terminated.

In his resignation message, Miyagi attempted to inspire readiness and resilience in the island popualtion.

“And to the people of Hawaii,” Miyagi said, “recent events have cast a bright light on our emergency preparedness, and caused many of you to consider whether you are ready for the emergencies we will surely face. Don’t let that feeling pass without taking action. Here it is from me one last time: Know where to go, what to do, and when to do it. Have a plan. Be safe, and know that whatever happens, good and courageous people will be there to help.”

Albertini has another idea for the siren test.

“We urge people on the first working day of each month, when the Emergency Management Agency tests its nuclear sirens state-wide at 11:45 (a.m.) to come out into the streets,” Albertini said. “Where ever you are in your neighborhood, along a public roadway… Come out, hold a sign for 15 to 30 minutes.”

“The big question about the false North Korean missile attack on Hawaii is this: will it fuel more pro-war nonsense, including missile defense?” Albertini asked. “Attack Korea before Korea attacks us mentality? People digging wishful fallout shelters? Or will it fuel a growing movement against war, nuclear abolition, and a demilitarized Hawaii and world?”

“Hawaii has more than 100 U.S. military sites including major force installations for the Army, Navy, Air Force and Marines,” Albertini said. “Including the Pacific Command, PACOM, that covers more than half the Earth.”

Albertini urged councilmembers to view the DVD video, Puhipau, about a nuclear blast over Pearl Harbor, put together by the Physicians For Social Responsibility in Hawaii.

Via YouTube / Produced by Puhipau and Joan Lander of Na Maka o ka ‘Aina in 1982 for Physicians for Social Responsibility – Hawai’i, this program explores, in stark and sobering detail, the medical and social effects of a theoretical nuclear attack on Hawai’i, particularly O’ahu.

This media release was issued by the Hawaii Emergency Management Agency before the test date:

HONOLULU — The State’s monthly test of the Statewide Outdoor Warning Siren System, coordinated with the test of the Live Audio Broadcast segment of the Emergency Alert System, is scheduled for Thursday, February 1, 2018 at 11:45 a.m.

The Attention Alert Signal informs residents to turn on a radio or television for information and instruction for an impending emergency, or if in a coastal inundation area, evacuate to higher ground. The Attack Warning Signal directs residents to seek immediate shelter and remain sheltered in place until an all-clear message is broadcast over radio or television.

Oahu residents in areas surrounding Campbell Industrial Park may also hear a “whooping” tone following the siren test. These areas include portions of Kalaeloa, Makakilo, Nanakuli, Kapolei, & Ewa Beach. The “whooping” tone is a test of the Hazardous Materials (HAZMAT) siren warning group that will be activated in the event of a HAZMAT incident requiring emergency notification of businesses, schools and residents within the vicinity of Campbell Industrial Park. Contact the City and County of Honolulu Department of Emergency Management at (808) 723-8960 for more information on the HAZMAT warning group siren test.

The outdoor warning sirens are one part of a three-component emergency notification system. A simultaneous test of the Emergency Alert System is conducted with the siren system, in cooperation with Hawaii’s broadcast industry. In the event of a real emergency, warning sirens and Emergency Alert Broadcasts would be joined by alerts via the Wireless Emergency Alert system, which delivers sound-and-text warnings to mobile telephones and compatible devices.