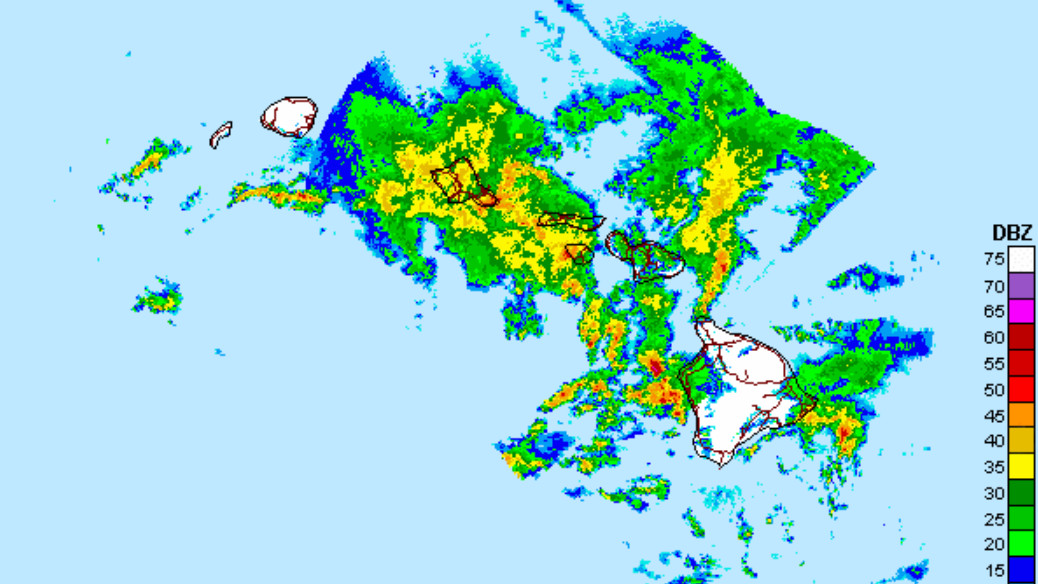 HAWAII ISLAND - Moist and unstable conditions prevail over the state, with an upper-level disturbance and a slow-moving surface trough bringing widespread thunderstorms and flooding rainfall.

UPDATE (6 p.m.) – A Flood Advisory has been issued for West Hawaii. The National Weather Service says at 5:40 p.m. HST, radar indicated heavy rain moving onto the slopes of the Big Island. The most intense rainfall was occurring from Captain Cook to Kailua-Kona. Moderate to heavy rainfall was also spreading into the windward Kohala Mountains and the South Kohala District. Additional rainfall is expected to move onshore over the next several hours.

(BIVN) – Severe thunderstorms are moving over Hawaii Island as of Sunday evening, as a Flash Flood Watch remains in effect for the entire Big Island.

At 5:01 p.m., the National Weather Service tracked a strong thunderstorm located along a line extending from 24 miles northwest of Kona International Airport to 9 miles northwest of Milolii, moving northeast at 25 mph. The storm was bringing with it 60 mph wind gusts.

“For your protection move to an interior room on the lowest floor of a building,” forecasters warned. “Stay away from windows.”

At 5:08 p.m. HST, a Special Marine Warning was issued, as severe thunderstorms capable of producing wind speeds in excess of 50 kt, and waterspouts, were located over near shore waters west of the Big Island, moving northeast at 20 knots.

A Winter Weather Advisory is also in effect for the summits of Mauna Kea and Mauna Loa. Snow is occurring, and forecasters say accumulations of 3 to 5 inches are expected.