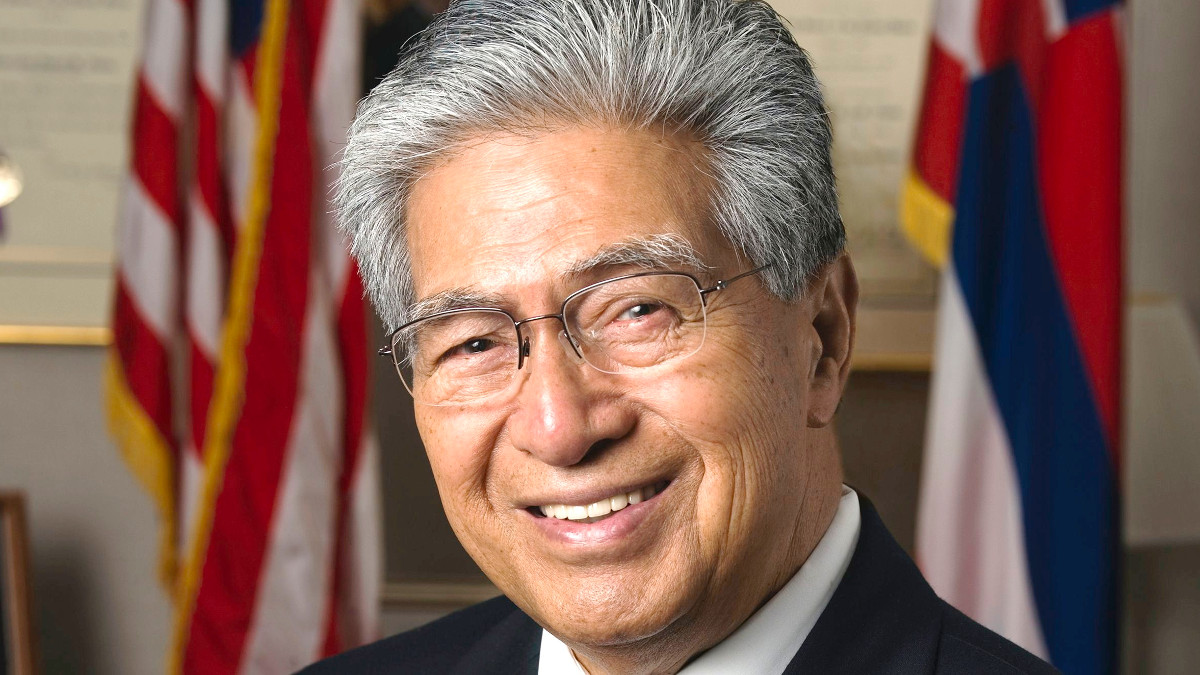 from official photo by U.S. Congress

Hawaii Remembers Sen. Akaka On The Day Of His Passing

HAWAII - The Democrat and first United States Senator of Native Hawaiian ancestry served from 1990 to 2013. He was 93.


October 2012 report by BIVN w/ Stephanie Salazar. As Sen. Akaka’s role as a public servant was winding down, he gave this reflective speech before the Council for Native Hawaiian Advancement.

(BIVN) – The Hawai‘ian Islands are mourning the death of former Senator Daniel Kahikina Akaka, who passed away Friday at age 93.

Fellow lawmakers began issuing statements expressing their condolences to the Akaka family and sharing their memories of the Democratic party member and first Native Hawaiian to serve in the U.S. Senate.

“Senator Daniel Kahikina Akaka embodied the Aloha Spirit,” wrote Sen. Mazie Hirono. “He dedicated his life to serving the people of Hawaii as an educator, and in the U.S. Army, state government, the U.S. House, and the U.S. Senate. In Congress, Senator Akaka’s care, empathy, and collegiality served as an example for us all. It’s an honor to sit at his desk in the Senate chamber, and we continue his work to improve the lives of veterans and the Native Hawaiian community. My thoughts are with Millie and the Akaka ohana in this difficult time. As he so often said, mahalo nui loa, my friend.”

“Senator Akaka served his country as a welder, public school principal, gubernatorial aide, U.S. representative, and U.S. senator. As a World War II Army veteran, his life was changed by the GI bill, and he believed in the government’s power to improve people’s lives—a guiding principle during his 36 years of service in Congress. He wrote and passed into law a 21st century GI bill, which updated and expanded services for veterans and their families. He spent years on the Indian Affairs Committee fighting for Native Hawaiians. He pushed for workers’ rights and good governance, enacting whistleblower protections as the chair of the Subcommittee on Oversight of Government Management. Every national park in Hawai‘i is better because of him; he expanded or improved each one, as well as the federally authorized National Tropical Botanical Garden. Senator Akaka also left his mark on the Dodd-Frank Act by making sure it improved financial literacy and expanded consumer and investor protections, and he secured funding for the H-3 as a member of the House Appropriations Committee and passed into law the Commercial Space Launch Act.

“Even after he left the Senate in 2012, Senator Akaka continued to lead. People looked to him for guidance and mentorship because of his strong moral compass as a policy maker and family man. He was a devoted husband to Millie and loving father and grandfather to a large ohana. Our thoughts are with his family in this difficult time. He will be well remembered and greatly missed.”

“My heart is heavy today as we remember my dear friend and mentor, Senator Daniel K. Akaka,” said Rep. Tulsi Gabbard. “With a servant’s heart full of aloha, Senator Akaka dedicated his life to serving the people and our nation, in the U.S. Army, as a public school teacher, in the U.S. House of Representatives, and in the U.S. Senate. I am grateful to have worked with and known Senator Akaka over the years, and to have witnessed firsthand how he truly embodied the aloha spirit—treating all with kindness, respect, and love. His legacy of service and aloha will continue to inspire each of us to live aloha every day—serving others, protecting our planet, and fighting for justice, equality, and peace. My heart is with Aunty Millie and the entire Akaka ʻohana. A hui hou and aloha, my friend.”

“Our beloved Sen. Akaka lived a life of service and aloha, and each of us in Hawaiʻi has benefited in countless ways,” said Governor David Ige, after announcing flags shall be flown at half-staff immediately, at the State Capitol and upon all state offices and agencies as well as the Hawai‘i National Guard in the State of Hawai‘i, until sunset on the day of Sen. Akaka’s interment. “Our state mourns the loss of this man of upright character. While we celebrate his military service and dedication to our nation’s veterans, his advocacy of the Hawaiian language and culture, and his work in Congress to recognize Filipino veterans, he was first and foremost a family man. Dawn and I send our condolences to Auntie Millie and the entire Akaka ʻOhana.”

“Senator Akaka served Hawaii with dignity, respect and humility,” commented State House of Representatives Speaker Scott Saiki. “He never lost sight of his values and the need to protect our state and its people. Hawaii has lost an extraordinary statesman.”

“Senator Akaka was an inspiration to so many in our Party and all levels of government. In Congress, his warmth and generosity earned him respect from members of both sides of the aisle,” said Tim Vandeveer, DPH Party Chairperson. “He embodied the Aloha spirit and always put the people of Hawai‘i first,” Vandeveer stated, adding “We celebrate his life, his dedication to public service, and his commitment to the Democratic Party. Our thoughts and prayers go out to his ohana during this difficult time.”

Vandeveer said information regarding memorial services will be shared when made available.