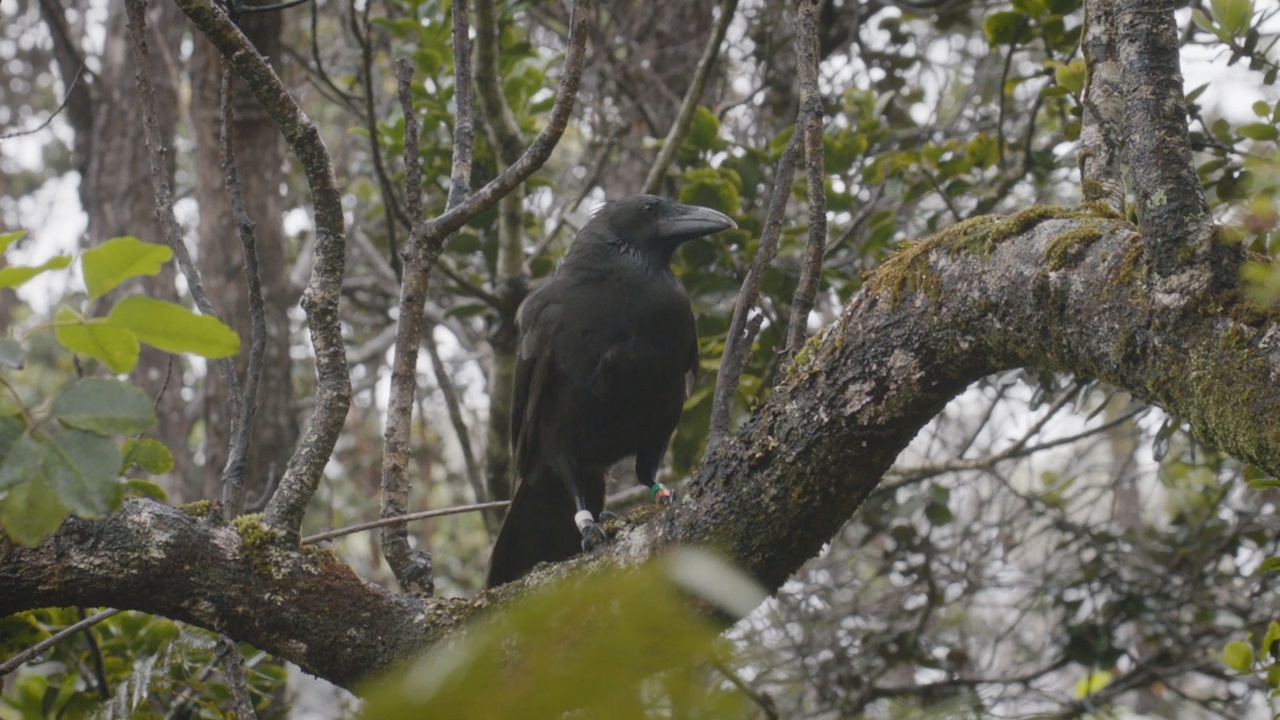 (BIVN) – The ‘Alalā, or Hawaiian Crow, released back into the wild at the Pu‘u Maka‘ala Natural Area Reserve are said to be thriving. Now, conservationists are beginning a study to analyze the unique vocalizations of the endangered birds, and may be seeing signs that the crows’ “behavioral repertoire is being recovered now that they have been reintroduced into the forest.”

The ʻAlalā Project is a partnership between major partners of State of Hawaiʻi Division of Forestry and Wildlife, the US Fish and Wildlife Service and San Diego Zoo Global. The project is working to establish a self-sustaining, wild population of ʻAlalā that fulfills its’ ecological and cultural roles. The project issued a joint media release on April 17.

The eleven young ‘Alalā living in the Pu‘u Maka‘ala Natural Area Reserve on the Island of Hawai‘i continue to thrive, showing increased natural behaviors, foraging on native plants, and even challenging the occasional ‘Io, or Hawaiian Hawk. Conservationists are cautiously optimistic about the birds’ continued success in native habitat and are working together with researchers at the University of Hawai‘i at Hilo to analyze vocalizations of these rare birds. Foraging and other social behaviors are also being studied to determine if historically seen activities are increasing now that the group has access to the surroundings in which they evolved.

“When the only existing ‘Alalā were living in the protected aviaries at the Keauhou Bird Conservation Center, we saw fewer types of alarm and territory calls in the population and the frequency of alarm calls was greatly reduced.” said Alison Greggor, Postdoctoral Associate, San Diego Zoo Global.

“We are beginning to observe behaviors that appear to be responsive to the changes and threats available in natural habitat and we are working on evaluating this scientifically to see if the birds’ rich behavioral repertoire is being recovered now that they have been reintroduced into the forest.” said Joshua Pang-Ching, Research Coordinator of the San Diego Zoo Global’s Hawaii Endangered Bird Conservation Program. Some of these behaviors include foraging on native fruits, searching for insects within bark of native trees, and interacting with ʻIo, which is their natural predator.

The eleven ‘Alalā were released into the reserve in September and October 2017. They represent what conservationists hope will be the beginning of a recovered population of the endangered crow species on the island. “ʻAlalā are important seed dispersers of native plants, and also were dominant voices of the soundscape of Hawaiian forests, and forest bird communities. The presence of ‘Alalā, back in their habitat, is a benefit and revitalization for ecosystem health of managed State lands and reserves, such as Pu’u Maka’ala Natural Area Reserve” said Jackie Gaudioso-Levita, Project Coordinator of the ‘Alalā Project.

The ‘Alalā, or Hawaiian Crow, has been extinct in the wild since 2002, preserved only at the Keauhou and Maui Bird Conservation Centers managed by San Diego Zoo Global’s Hawaii Endangered Bird Conservation Program. Scientists hypothesize that the possible changes in vocalizations may represent the kind of behaviors necessary to the species’ survival now that they have been returned to their native forest home.