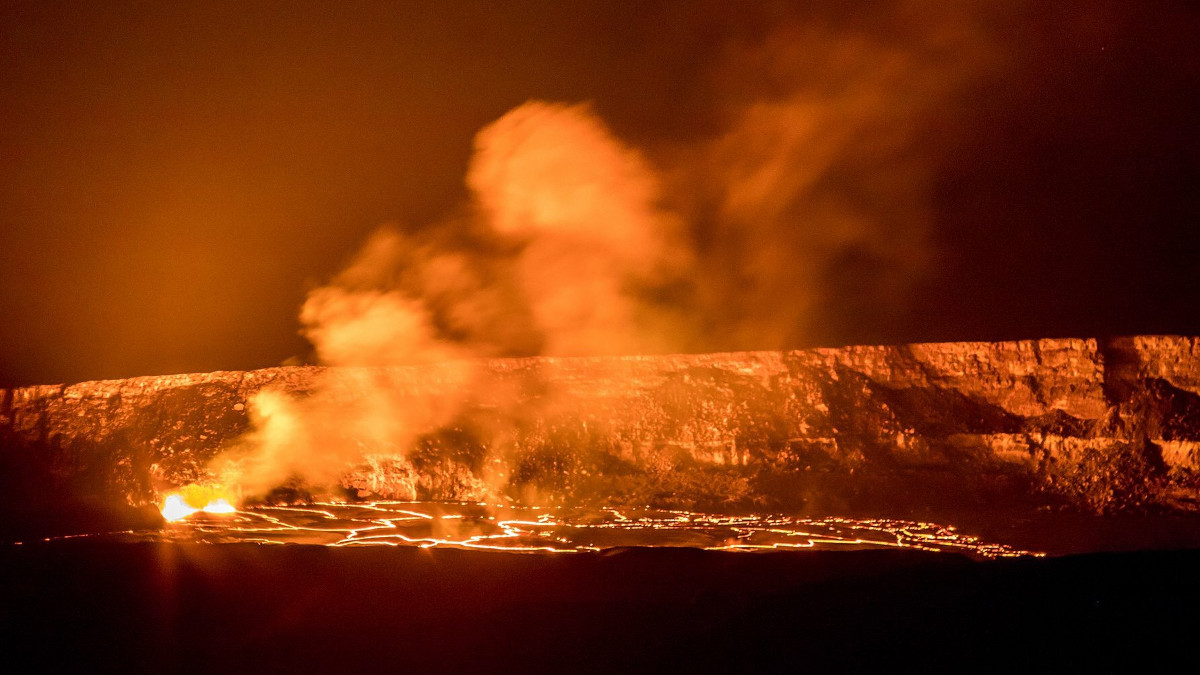 The overflow of the lava lake, photo by NPS Volunteer Janice Wei

HAWAII VOLCANOES NATIONAL PARK - One week after the first notice was issued, the USGS has put out another statement. This time the focus is on the rise of the summit lava lake. 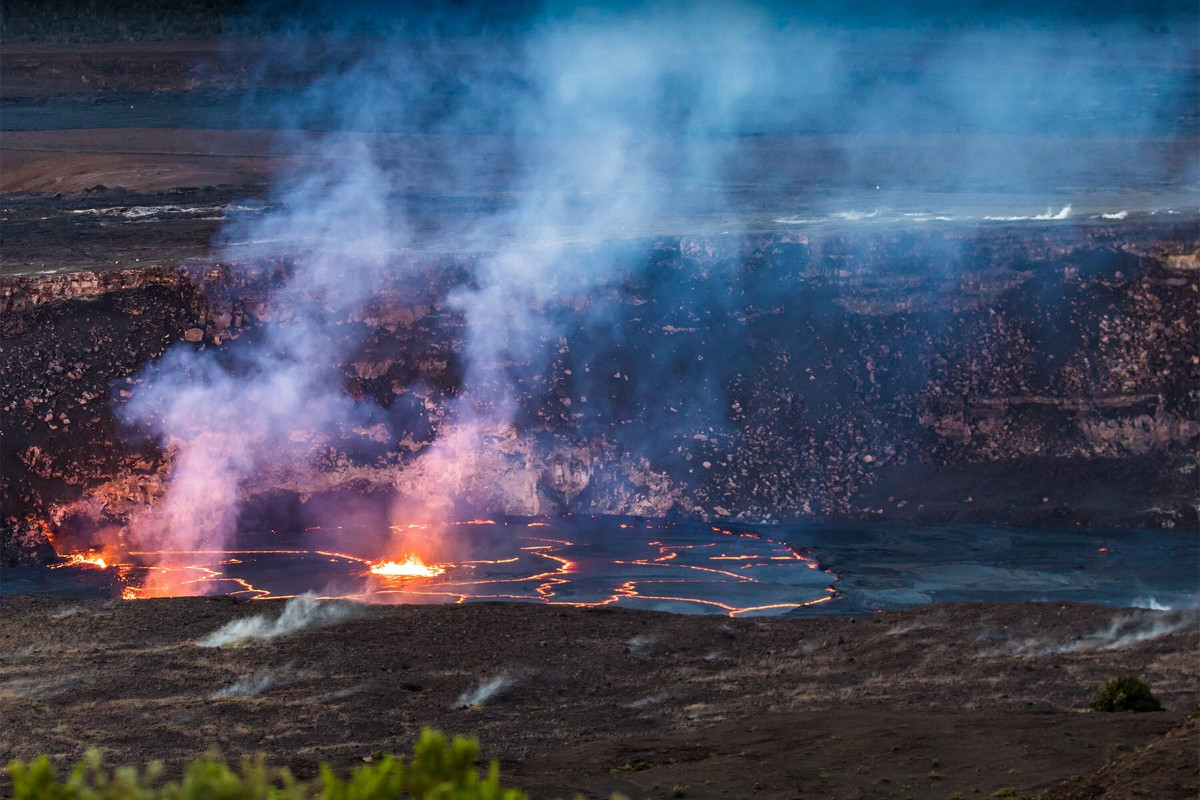 (BIVN) – On Tuesday afternoon, the USGS Hawaiian Volcano Observatory issued another Volcanic Activity Notice. The notice focused on the rise and overflow of the Kīlauea Volcano summit lava lake.

On Tuesday evening, the lava lake was again spilling over the rim of the Overlook crater and onto the floor of Halemaʻumaʻu. This sort of activity has only occurred a handful of times since the current summit eruption of Kīlauea volcano began in 2008.

The notice also follows a different Volcanic Activity Notice, issued one week earlier on Tuesday, April 17. The first notice dealt with the inflation of Puʻu ʻŌʻō on the active East Rift Zone of Kīlauea. USGS said observations suggest that “the magma system beneath Puʻu ʻŌʻō has become increasingly pressurized” and that if the activity continued, “a new vent could form at any time.”

The inflation of Puʻu ʻŌʻō appears to be somewhat linked to the rise of the summit lava lake.

High lava lake levels in the informally named “Overlook crater” within Halemaʻumaʻu at the summit of Kīlauea Volcano have resulted in a series of overflows of lava onto the Halemaʻumaʻu crater floor beginning late on April 21 and continuing intermittently through this morning. These are the first significant overflows of the summit lava lake since May 2015 (a small overflow also occurred in October 2016). Accompanying this high stand of lava within the Overlook crater are nearly continuous areas of spattering along the margins of the lava lake, providing good views from Hawai’i Volcanoes National Park’s Jaggar Museum Overlook. Sulphur dioxide gas emissions from the lake remain elevated.

Since mid-March 2018, tiltmeters and GPS instruments have recorded an overall trend of inflationary tilt at the summit of Kīlauea Volcano reflecting an increase in the amount of magma in the shallow magmatic reservoir. In response, the lava lake within the Overlook crater has risen, reaching levels high enough for lava to flow over the crater rim and spread to the north, south, and southwest of the vent. A series of overflows, each lasting tens of minutes to several hours, occurred between April 21 and April 24. Between overflows, the lava column receded below the Overlook crater rim before rising again.

Based on HVO web camera records and direct observations, these flows are similar to those produced in the April-May 2015 overflows. They consist of lobate sheets of shelly pāhoehoe traveling as far as 375 m (about a quarter mile) across the floor of Halemaʻumaʻu. As of midday April 23, the new lava flows had covered about 40 acres (about 30 percent) of the floor of Halemaʻumaʻu. Each overflow also adds some height to the enclosing vent rim.

Photos of the overflows can be seen on the HVO web site.

Beginning in mid-April 2018 and continuing through the current high lava lake level and subsequent overflows, HVO seismometers recorded an uptick in small earthquakes beneath Kīlauea’s summit and upper East Rift Zone reflecting increased pressurization. However, unlike the April-May 2015 event, no bursts of earthquakes or deformation indicating an intrusion of magma into the southern caldera region of Kilauea have yet been recorded.

Although Kīlauea’s summit and East Rift Zone magma systems are connected, with changes at one sometimes leading to changes at the other, the Puʻu ʻŌʻō vent on Kīlauea Volcano’s East Rift Zone has shown no direct response to the recent overflows. However, HVO tiltmeters, GPS, web cameras, and field observations, continue to record inflation of Puʻu ʻŌʻō and the upper portion of the Episode 61g lava tube system, which could lead to the opening of a new vent on or near Pu’u ‘Ō’ō. If/when that happens, it is possible, even likely, that the summit lava lake will be affected, most likely by a significant drop in the lake level.

High levels of sulfur dioxide gas, rockfalls, and explosions remain the primary hazards of concern. While the lake level is high, the risk of rockfalls and subsequent explosion of molten spatter and rock debris onto the southeast rim of Halemaʻumaʻu is slightly elevated due to the shorter vertical distance from the lake surface to the crater rim. These rockfalls and explosions can occur suddenly and without warning, underscoring the extremely hazardous nature of the Halema’uma’u rim, an area that has been closed to the public since late 2007.

Visitors to the Hawai’i Volcanoes National Park Jaggar Museum Overlook and other Park areas should also note that under southerly (non-trade) wind conditions, rockfalls and explosions can result in a dusting of powdery to gritty ash composed of volcanic glass and rock fragments. These ashfalls represent a minor hazard, but visitors should be aware that dustings of ash at Jaggar Museum and other areas around the Kīlauea summit are possible.

Remarks: The current high level of lava within the Overlook crater within Halemaʻumaʻu is best explained by an increase in the amount of magma stored within Kīlauea Volcano’s shallow magma system, something that has occurred many times during the ongoing East Rift Zone eruption. This increase is also responsible for the continuing inflation and elevated microearthquake activity in the summit region.

During similar lava lake activity at Halemaʻumaʻu in the 1800s and early 1900s, lava lakes like the current one frequently produced overflows. With time, overflows and intermittent lava spattering can build a collar or levee of solidified lava that contains the rising and circulating lava lake. This phenomenon is known as a “perched lava lake.”

As long as Kīlauea’s summit magma reservoir remains pressurized and the current inflationary trend continues, we expect high lava lake levels, occasional overflows on the Halemaʻumaʻu floor, and possibly formation of a perched lava lake. Rockfalls into the summit lava lake accompanied by explosions and ejection of molten spatter and rock debris may occur and gas emissions will continue to be elevated. Ongoing spattering from sources on the surface of the lake will continue to produce fine ash and Pele’s hair that can be blown far downwind.

HVO is closely monitoring Kīlauea Volcano, especially watching for any signs of unrest that could precede a new outbreak of lava or a change in behavior at either the Puʻu ʻŌʻō or summit Overlook crater vents.