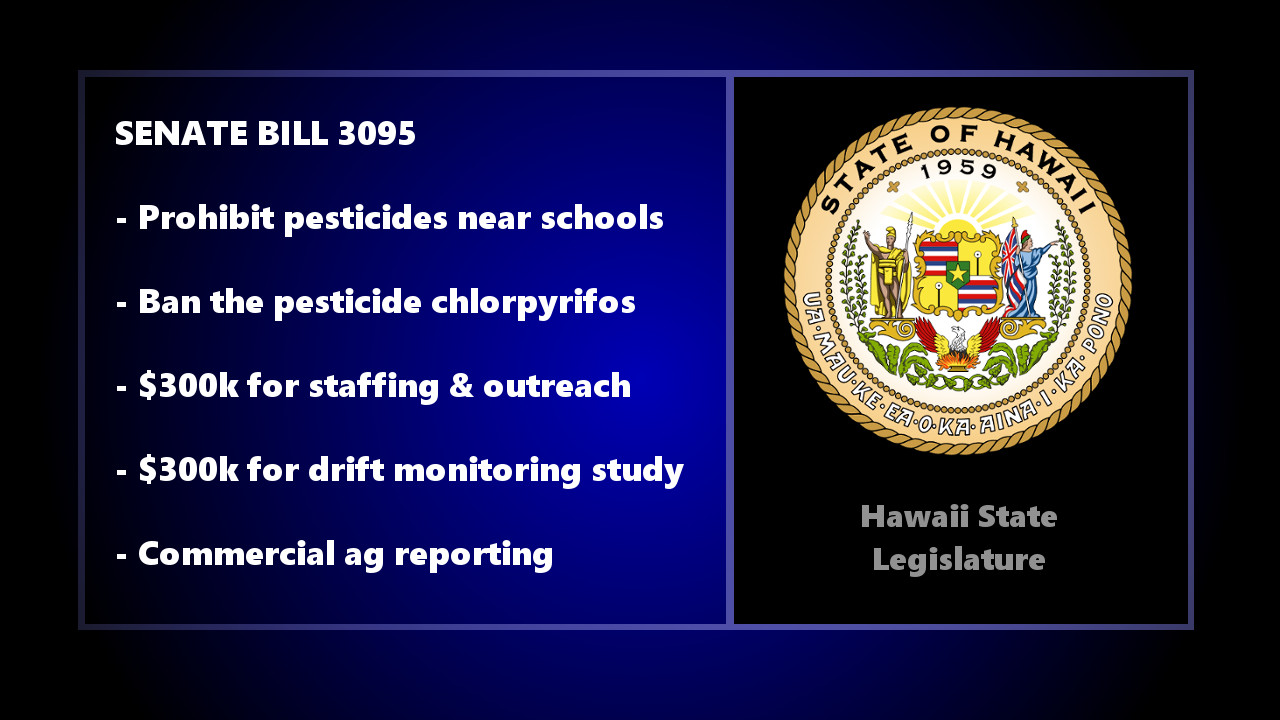 (BIVN) – Pesticides will be restricted within 100 feet of schools and chlorpyrifos will be banned, under a bill that House and Senate conferees agreed on Friday at the state legislature.

According to lawmakers, the final version of Senate Bill 3095 (SD1 HD1 CD1), once passed in a final vote by both chambers and approved by Governor David Ige, will:

From the Hawaii State House of Representatives:

For years lawmakers have tried and failed to pass legislation to regulate the use of pesticides, but today House and Senate conferees agreed on Senate Bill 3095 SD1 HD1 CD1 which restricts pesticide use near schools, prohibits the use of some particularly dangerous pesticides completely, and requires transparency and disclosure for the use of restricted-use pesticides in large quantities.

Parents have rallied across the state in opposition to the unintended consequences of pesticide use, especially near schools. Exposure to pesticides can lead to developmental problems in children, and exposure to the pesticide chlorpyrifos has sent people to the hospital here in Hawai‘i.

Representative Richard P. Creagan said there is no safe use for the pesticide chlorpyrifos and with other nations already prohibiting its use to protect the public, now is the time to pass this bill.

“This bill is an important statement by our state, that has national implications,” said Agriculture Committee Chair Creagan (Naʻālehu, Ocean View, Capt. Cook, Kealakekua, Kailua-Kona). “It will bring attention to the risk to pregnant women from chlorpyrifos. It will also send a message to the 100 countries still using chlorpyrifos that tens of millions of their babies and children’s brains are at risk and show them how to reduce that risk.”

Chlorpyrifos kills as many as 10,000 people annually around the world. Its use is already prohibited in Europe and other places. In 2000, the U.S. Environmental Protection Agency prohibited the residential use of chlorpyrifos but did not issue an outright ban. With this measure, Hawai‘i becomes the first state to prohibit the use of the substance to protect public health.

“Protecting the health of the people in our communities is paramount,” said House conference committee co-chair Representative Chris Lee (Kailua, Waimānalo). “This bill strikes a thoughtful balance that protects the health of Hawai‘i’s children and families and also helps ensure agricultural companies use pesticides responsibly to prevent unintended consequences.”