PUNA, Hawaii - The latest from the USGS Hawaiian Volcano Observatory and Hawaii County Civil Defense. Video by the Hawaii Dept. of Defense. 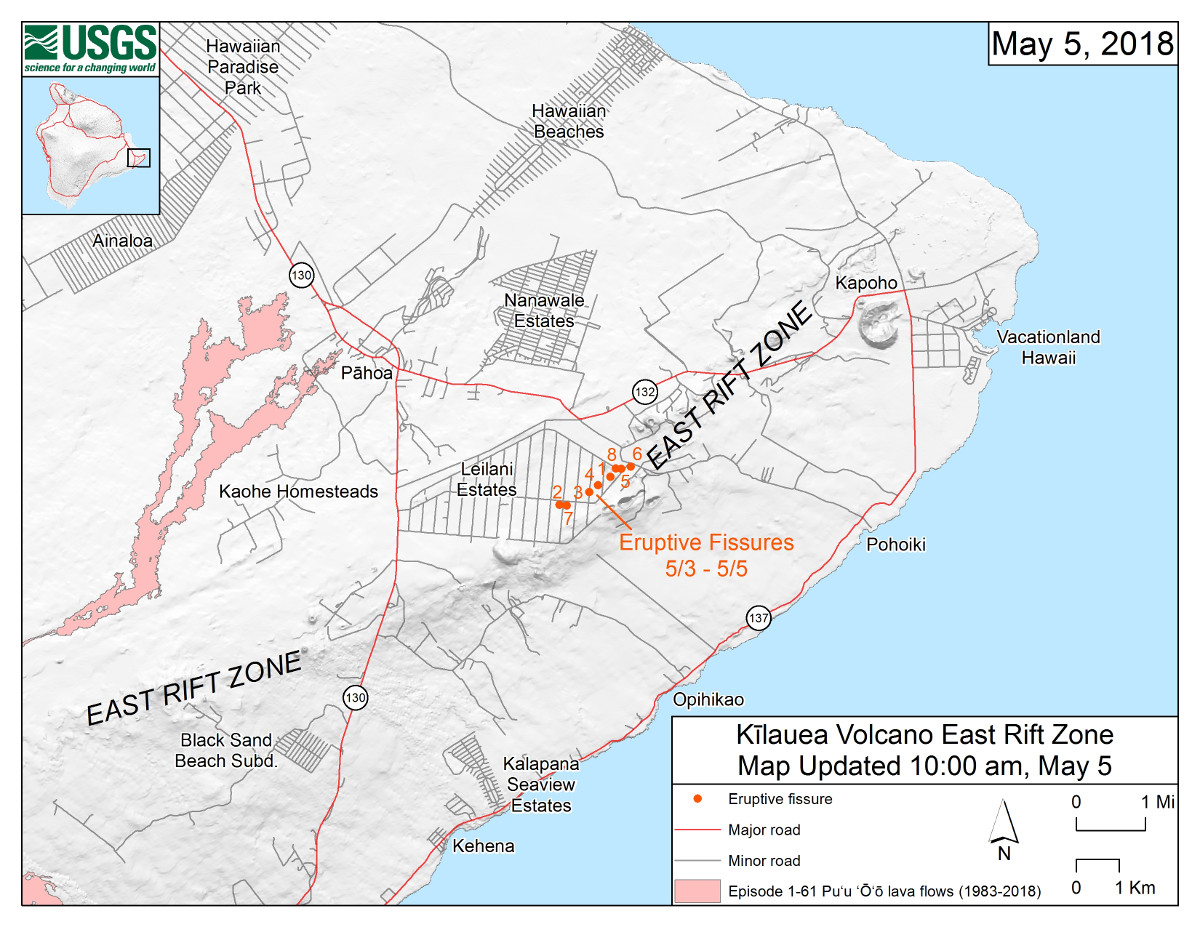 This map shows the locations, mapped by USGS-HVO scientists, of eruptive fissures in the order that they occurred in the Leilani Estates Subdivision as of 10:00 a.m. HST today (May 5).

(BIVN) – USGS and county field units confirm that the eruptive activity in Leilani Estates is increasing and is expected to continue. “The area is unstable with multiple volcanic eruptions & related hazards of earthquake & poisonous gasses. Please heed all evacuation advisories,” civil defense says.

Here is the latest from the USGS Hawaiian Volcano Observatory as of 11:54 a.m.

Summary: Active eruption of lava and gas continues along Kīlauea Volcano’s lower East Rift Zone within the Leilani Estates subdivision. Additional fissure vents producing spatter and small lava flows developed early this morning, and additional outbreaks in the area are likely. Deflationary tilt at the summit of the volcano continues and the lava lake level continues to drop. There is no active lava in the Puʻu ʻŌʻō area. Aftershocks from yesterday’s M6.9 earthquake continue and more should be expected, with larger aftershocks potentially producing rockfalls and associated ash clouds above Puʻu ʻŌʻō and Halemaʻumaʻu Crater.

Photos and maps of activity will be posted to the HVO web site as soon as possible.

Residents of the Puna District should remain alert, review individual, family, and business emergency plans, and watch for further information about the status of the volcano.

Puʻu ʻŌʻō Observations: Seismicity remains elevated at Puʻu ʻŌʻō but tiltmeters near the cone show no significant deformation overnight. No lava is active in the area and the 61g lava flow is no longer being fed. The summit crater of the cone will likely continue to collapse intermittently producing small plumes of ash. Yesterday, there were several vigorous episodes of ash emission in response to collapse, including immediately after the nearby M6.9 earthquake.

Hazard Analysis: Additional fissure outbreaks producing spatter and lava flows are likely. Locations cannot be forecast with certainty, but new outbreaks thus far have been preceded by ground cracking, then strong steam and volcanic gas release. Areas uprift and downrift of the current fissure zone are the most likely to see further outbreaks.

Areas downslope of an erupting fissure or vent are at risk of lava inundation. Currently, lava flows from active fissures are sluggish and not moving very quickly or far. The general area of the Leilani subdivision remains at greatest risk. However, as the eruption progresses, other areas of the lower East Rift Zone may also be at risk.
High levels of volcanic gas including sulphur dioxide are being emitted from the fissure vents. In addition, smoke from burning houses and burning asphalt is a health concern and should be avoided.

As the lava lake level inside Halemaʻumaʻu drops, rockfalls from the enclosing walls may increase in frequency prompting explosions of spatter from the lake onto the nearby crater rim and lofting plumes of ash. Dustings of ash from these events can occur downwind. Yesterday’s strong earthquakes were responsible for some of these plumes and associated ashfall, both from Kīlauea Volcano’s summit lava lake and the Puʻu ʻŌʻō vent.

Additional aftershocks from yesterday’s M6.9 earthquake are expected and some may be strong. Residents are advised to review earthquake preparedness by consulting available resources such as here.

Here is the latest from Hawaii County Civil Defense as of 10 a.m.

Hawaiian Volcano Observatory confirms the volcanic eruption continues in Leilani Subdivision in the Puna District. Active volcanic vents are located on Makamae, Kaupili, Mohala, Kahukai Streets and Pohoiki Road. Two new vents have opened near Makamae and Leilani, and on Kahukai Street. There is no activity at Puna Geothermal Venture at this time.

All residents of Leilani Estates and Lanipuna Gardens Subdivision are on evacuation notice. Police, Fire and County agencies along with the National Guard are assisting with evacuation.

Due to the eruption, the following are issued:

Water spigots have been installed near the entrance of Lava Tree State Park and a water tanker has been placed in Vacationland for the public to access.

Hawai’i Police Department reports Leilani Estates remains inaccessible to the public. Checkpoints have been set up in the surrounding perimeter at: 130/132, 132/Ka Ulu Laau Rd., 132/137, 137/Pohoiki, 130/Kamaili, 130/12mm, 130/14mm, 132/Pohoiki. Residents should consult with the police officers on duty for road accessibility, as conditions are subject to change.

United States Postal Service announced that evacuated residents can pick up their mail at the Pahoa Post Office. In addition, the downtown Hilo Post Office is closed until further notice due to structural damage from today’s earthquake.

The high levels detected are an immediate threat to life for all who become exposed. First responders may not be able to come to the aid of residents who refuse to evacuate.

The area continues to be unstable with multiple volcanic eruptions happening. No one is allowed into the area. Do not attempt to return to your home at this time.

All residents in Leilani Estates and Lanipuna Gardens Subdivisions have been placed on evacuation status. The Pahoa Community Center is available as a pet friendly shelter, and the Kea’au Community Center has been established as an alternative pet friendly evacuation center farther away for those sensitive to vog. Call Civil Defense at 935-0031 for any emergency needs.

Residents evacuating should bring an emergency evacuation supply kit including necessary medicine, food, and necessary items for your comfort if possible.

County, State and Federal partners continue to monitor the situation. You will be informed of any conditions that affect your safety.