PUNA, Hawaii - Today, Fissure 8 continued to produce persistent fountains that reached heights of 200-250 feet. and temperatures of over 2,000 degrees F. 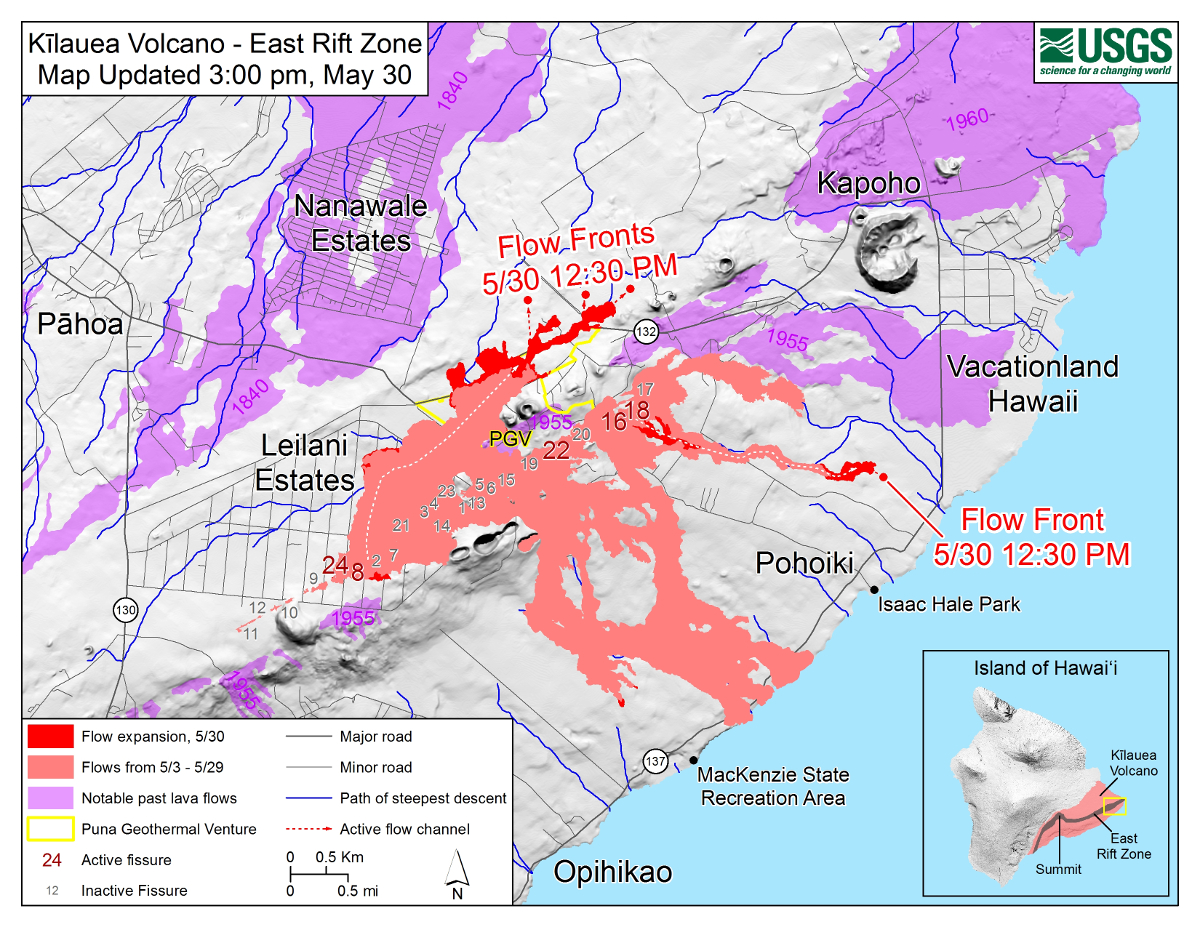 Map as of 3:00 p.m. HST, May 30, 2018. Given the dynamic nature of Kīlauea’s lower East Rift Zone eruption, with changing vent locations, fissures starting and stopping, and varying rates of lava effusion, map details shown here are accurate as of the date/time noted. Shaded purple areas indicate lava flows erupted in 1840, 1955, 1960, and 2014-2015.

(BIVN) – Vigorous eruption of lava continues from the lower East Rift Zone fissure system in lower Puna, where lava has covered 5.5 square miles, or 3,534 acres, as of last night.

Fissure 8 has recorded the highest temperature – 2039 degrees F (1115 degrees C) – as well as the highest lava fountains – 200 to 250 feet – of the current eruption. The fissure has been the largest producer of lava flows in recent days. According to the USGS Hawaiian Volcano Observatory at 11:27 a.m. HST:

Overnight, Fissure 8 continued to produce persistent fountains that reached heights of 200-250 feet. A small spatter cone is forming on the downwind side of the fountain and is approximately 100 feet high. The fountains are feeding flow activity to the northeast, and minor overflows from the Fissure 8 channel are occurring along its length. One overflow covered the remaining northern part of Makamae Street in Leilani Estates. This overflow crossed Kahukai street, filling in a low area between Makamae and Luana streets. The front of the Fissure 8 flow near Noni Farms road advanced at rates of about 80 yards/hour. At 6:15 AM HST, the flow front was 2.2 miles above the Four Corners area.

“High eruption rates from Fissure 8 have led to the formation of a leveed channel along the western edge of the lava flow,” scientists warned. “Failure of flow levees could result in rapid advance of flows. Flow margins are extremely hazardous and should not be approached.”

The high fountains of Fissure 8 have also dispersed Pele’s Hair and other lightweight volcanic glass downwind of the fissure. It has been accumulating on the ground within Leilani Estates. “Winds may waft lighter particles to greater distances. Residents are urged to minimize exposure to these volcanic particles, which can cause skin and eye irritation similar to volcanic ash,” USGS says.

A county plan to re-open the Pahoa Community Aquatic Center was foiled today after Pele’s Hair was found in the water and filtration systems. The pool was scheduled to reopen on June 1, 2018.

During a media conference call at 11 a.m. Thursday, Jessica Ferracane with Hawaii Volcanoes National Park said work has started to remove the hardened lava from Chain of Craters Road in order to prepare the passageway to become an emergency evacuation route, should Highway 130 close.

Due to the active volcanic eruptions, Mayor Harry Kim issued a mandatory evacuation order for Leilani Estates. The following policies are in effect:

“Refusing to evacuate may put you, your family and first responders in danger,” officials said. “Heed warnings from Civil Defense officials and stay alert.”