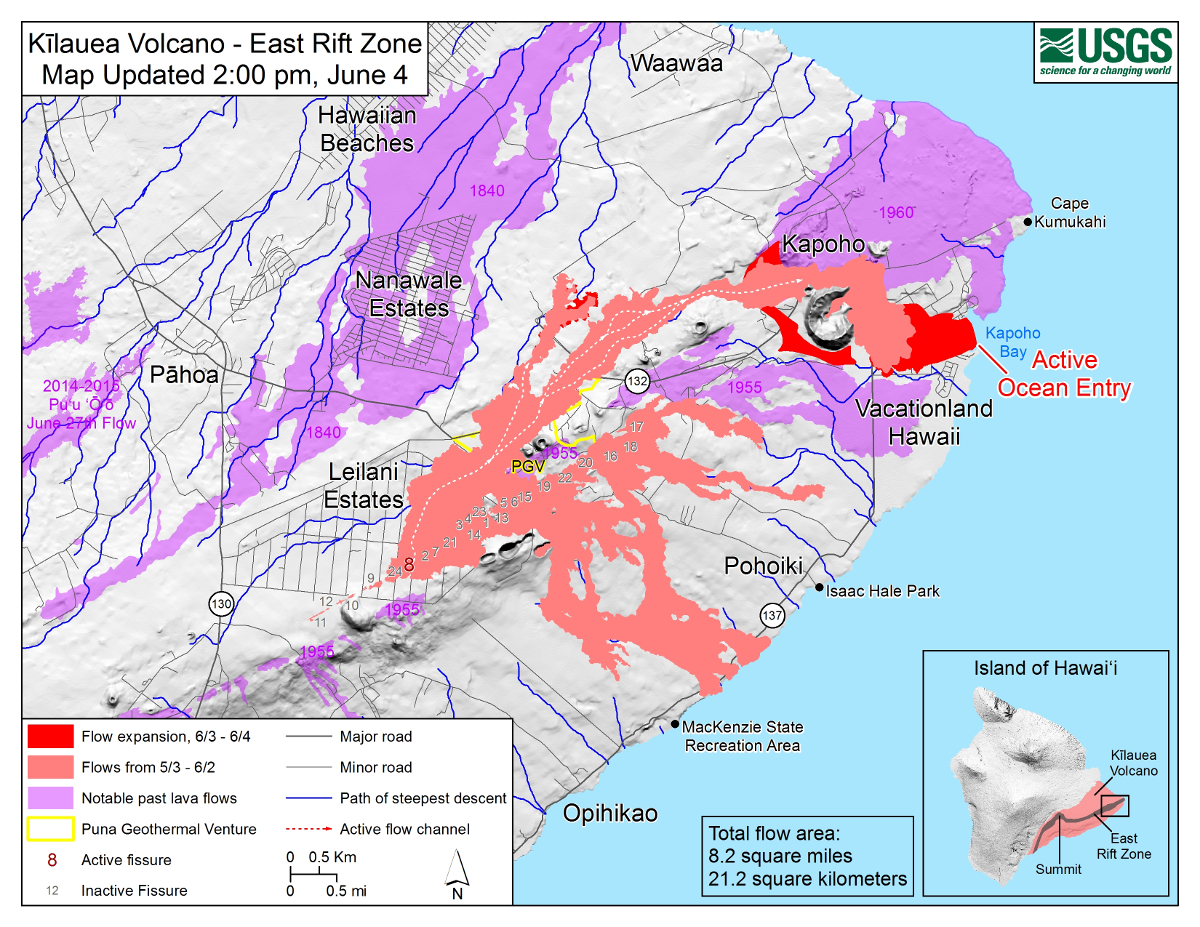 (BIVN) – Hawaii County Civil Defense continues to coordinate the effort to evacuate, and in some cases rescue, the residents in the lava-inundated area of Kapoho, as Fissure 8 is sending a robust lava channel downslope to the ocean.

According to the USGS Hawaiian Volcano Observatory at 5:30 p.m. HST:

Fountaining at Fissure 8 continued feeding a robust lava channel to northeast along Highway 132 to the ocean entry in Kapoho bay. As of late afternoon the lava entry had built a delta extending approximately 700 yards into the bay. A laze plume is blowing inland from the ocean entry but dissipating quickly. The lava flow front is about 600 yds wide. A lava breakout was also occurring upslope of the Kapoho cone cinder pit but stalled about 300 yards southeast of the intersection of Railroad Avenue and Cinder Road.

Civil Defense says Government Beach Road, between Kahakai Boulevard and Cinder Road, is open to Waa Waa and Papaya Farms Road residents only with official credentials. There is no curfew. “Residents in this area should heed warnings from Civil Defense officials and be prepared to evacuate with little notice,” officials say.

Officials say the shelter at Pahoa Community Center is open and pet-friendly, but the Keaau Armory shelter has reached capacity.

Officials are also warning of the hazards associated with the lava entering the ocean, which produces “laze”.

According to emergency officials:

Meanwhile, earthquake activity at the summit has been low after the explosive eruption yesterday, but is slowly increasing. USGS says inward slumping of the rim and walls of Halema`uma`u continues in response to persistent subsidence. “We expect that earthquake rates may increase in the coming hours to days and culminate in another small explosion, following the pattern of the past few weeks,” scientists say.