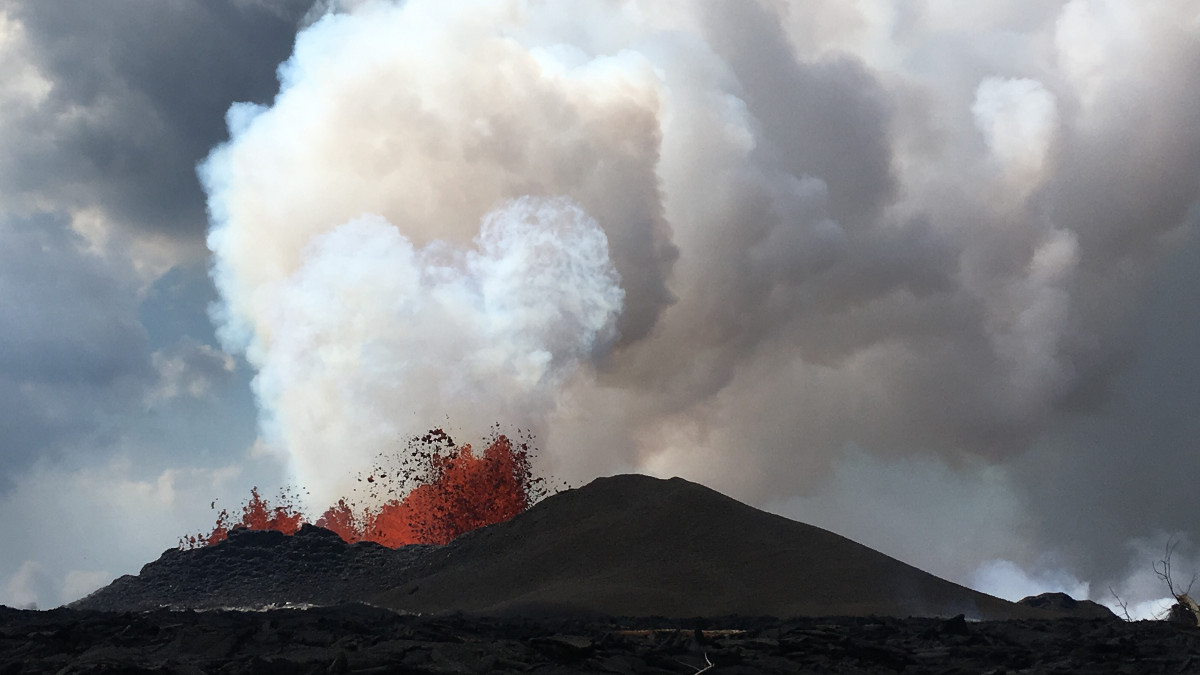 USGS: The lava fountain at Fissure 8 reached heights of 150 ft., as shown in this image taken around 9:30 a.m. Wednesday.

HAWAII ISLAND - Kona residents packed into the West Hawaii Civil Center on Wednesday for a community meeting on vog, as the eruption continues on the lower East Rift Zone. 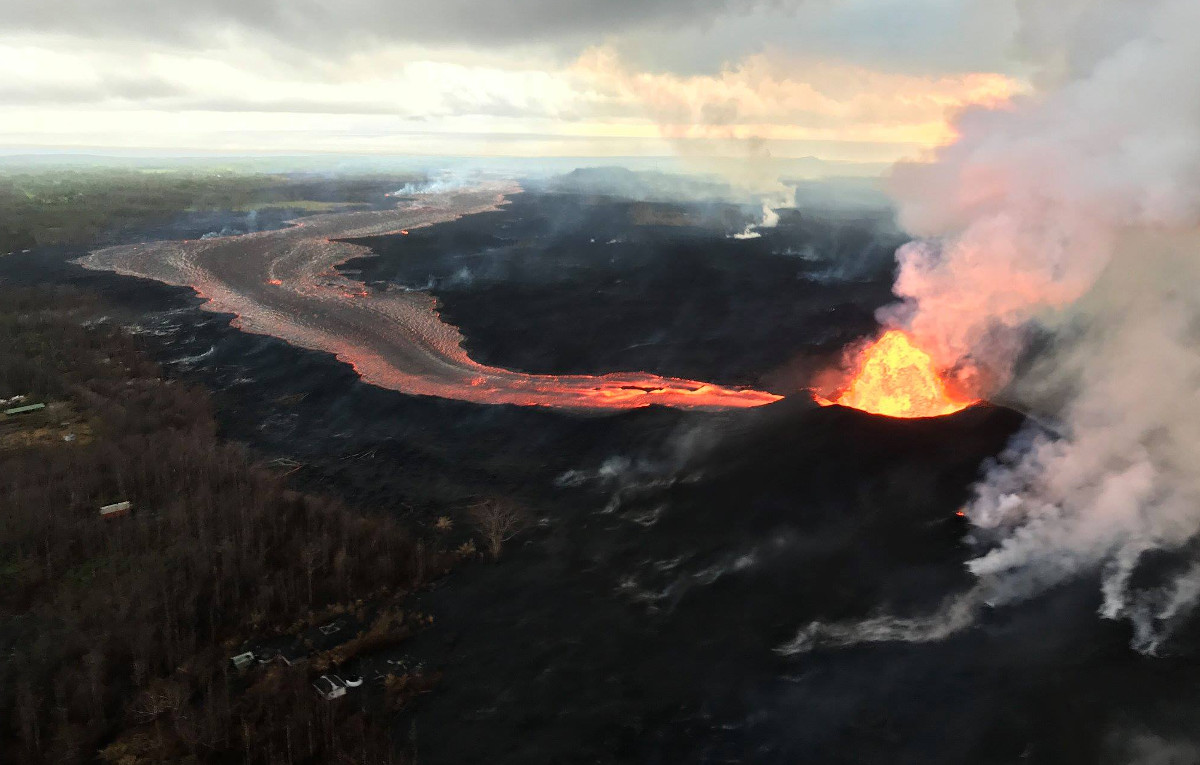 The USGS Hawaiian Volcano Observatory reports that vigorous lava eruptions continue in the lower East Rift Zone, according to Hawaii County Civil Defense. “Fissure 8 is very active and producing a large channelized flow that has filled in Kapoho Bay,” emergency officials say. “The ocean entry is sending a large laze plume into the air along the coastline.”

“Lava is continuing to enter the ocean in the area of the Vacationland subdivision,” scientists reported last night. “A late afternoon overflight showed that the ocean entry is creating a vigorous steam plume that is being blown inland to the southwest. The delta that formed at Kapoho Bay extended slightly throughout the day, and a lateral lobe of the flow is pushing slowly north through what remains of the Kapaho Beach Lots subdivision.”

Just after 3 a.m. this morning, geologists reported “no activity in the Fissure 8 lobe that was advancing north around the Four Corners cinder pit; UHH UAS team reports no lava from the main channel is flowing toward the northern lobe of the Fissure 8 flow.”

“Government Beach Road, between Kahakai Boulevard and Cinder Road, is open to Waa Waa and Papaya Farms Road residents only with official credentials. There is no curfew,” civil defense repeated Thursday morning. “Residents in this area should heed warnings from Civil Defense officials and be prepared to evacuate with little notice.” 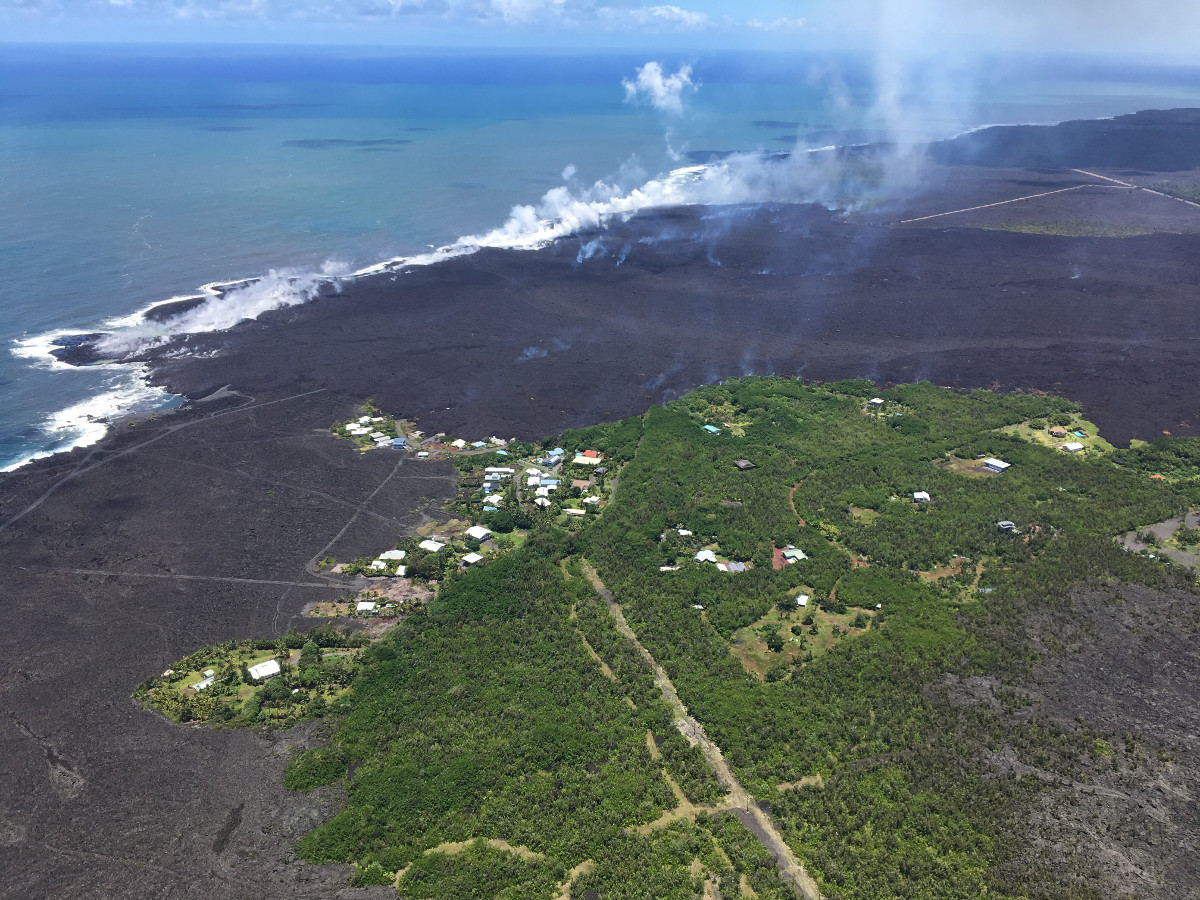 USGS: Views from HVO’s helicopter overflight at 1 p.m. on Wednesday, show the remains of the Kapoho Beach Lots subdivision and the fissure 8 flow front. The northern flow margin in this area was unchanged from HVO’s morning flight and appeared to have stopped advancing at the time of the flight.

A small explosion, with an equivalent earthquake magnitude of M5.6, occurred at 4.07 PM HST, generating an ash plume that rose to an elevation of about 10,000 feet. Since this small explosion, summit seismicity has dropped significantly, following the pattern of previous events. Inward slumping of the rim and walls of Halema`uma`u continues in response to ongoing subsidence of the summit.

The National Weather Service says emissions from Kilauea “may spread to portions of the Hilo district, or other areas on the Big Island, and even to other islands in the chain. Confidence is low as to the extent that vog will spread. If an explosive eruption at Halema’uma’u were to send ash up to 10,000 to 15,000 feet or higher, then this plume could spread northwest and north.” 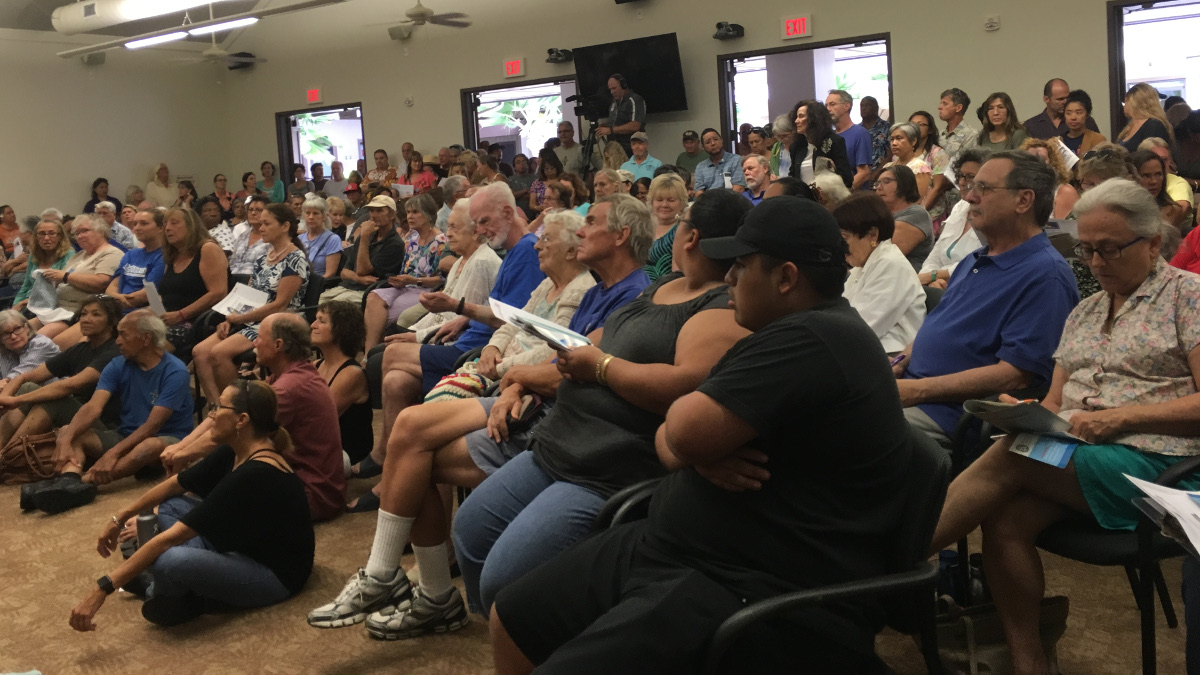 Another community meeting on volcanic ash and VOG will be held today – Thursday, June 7 – in Volcano at the Cooper Center at 7 p.m.

Civil Defense says you can monitor sulfur dioxide and hydrogen sulfide on Hawaii Island by visiting the Civil Defense website or go directly to epa.gov.

From the Hawaii Department of Health:

Hawai‘i Island emergency responders now have access to real-time data from more than 30 additional areas on the island to make informed decisions about the air quality affected by volcanic activity. Data from newly installed air quality monitors stationed in the Kilauea East Rift Zone and other affected areas is now available to the public.

The Hawaii Department of Health (DOH), in partnership with the Hawaii County Civil Defense Agency (HCCDA) and the U.S. Environmental Protection Agency (EPA), expanded air quality monitoring capacity in the lower East Rift Zone during the volcanic eruption on Hawaii Island. The data is now available online at epa.gov/kilaueaairdata.

“The health and safety of first responders and the community have been our top priorities,” said Director of Health Dr. Bruce Anderson. “These additional monitors will provide integral data for emergency management officials to make critical decisions each day to support response efforts, and for residents and visitors to make informed decisions for their personal health and safety concerns.”

“Working together with state and local public health and emergency management agencies, the EPA developed an online mapping tool that provides real-time air quality data near the volcanic activity,” said Mike Stoker, regional administrator for the EPA’s Pacific Southwest Office. “The EPA will continue to provide support to our partner agencies to ensure first responders and the public have access to this vital information.”

The map viewer uses the county’s three-color public notification system (blue, orange and red), which recommends protective actions to be taken by responders and the public. The three-color system corresponds with established health guidelines.

“Volcanic eruptions are unique hazards that call for specialized response protocols,” said Talmadge Magno, HCCDA administrator. “We developed a system that aligns with federal and state health standards that also meets the needs of our county first responders. We believe these guidelines support our sheltering and evacuation messaging by efficiently communicating health risks to the public during our ongoing response.”

In addition to the DOH and EPA monitors, the National Park Service, U.S. Geological Survey, and South Coast Air Quality Management District in California also provided expert staff, equipment and monitors to this network. There are 15 new monitoring stations in place, which brings the total network to 34 monitoring stations. Monitors track sulfur dioxide (SO2), hydrogen sulfide (H2S) and particulate matter. Most monitors are placed around the active fissure area, but there are also monitors in the southern and western areas of the island.

The monitors provide real-time data on SO2 and H2S levels. The public viewer shows a map of the monitoring stations color-coded based on the average concentration of all data received over 30 minutes and is updated every time a new reading is received. The color air monitoring stations will change depending on the level of health risk. Blue indicates gas levels are healthy, orange indicates moderate levels, and red indicates unhealthy conditions.

Hawai‘i Electric Light’s Customer Care team will be at the Pāhoa County Council Office located at 15-2879 Pāhoa Village Road starting tomorrow, June 7. “Representatives will be available to assist customers from 9:30 a.m. to 2:00 p.m. every Thursday in June,” HELCO says. “Information on electrical safety, emergency preparedness, restoration, and customer accounts and billing will be available.”