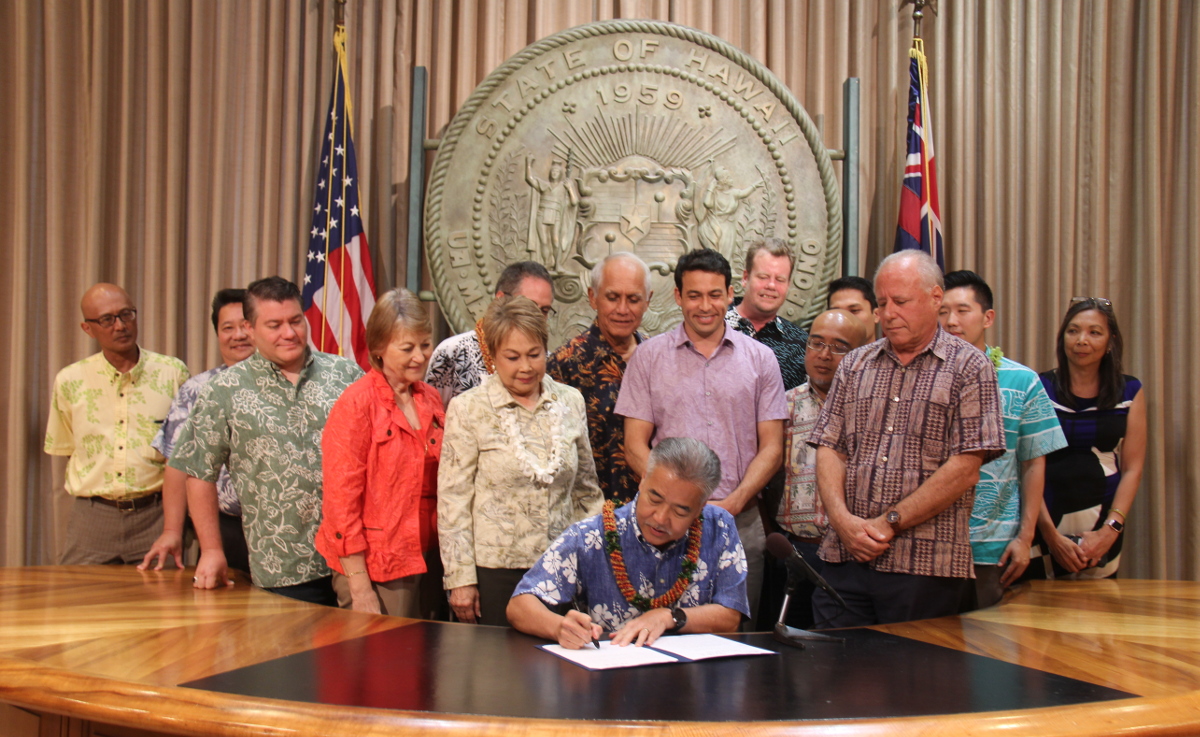 Surrounded by the legislators who supported the new law, Governor David Ige signed SB3095, now Act 45, in Honolulu on Wednesday. According to the state:

Starting Jan. 1, 2019, users of pesticides containing chlorpyrifos or other restricted use pesticides will be required to report annually to the state Department of Agriculture; will be prohibited from using the chemical within a 100-foot buffer zone around schools during school hours; will be prohibited from applying pesticides with chlorpyrifos without a temporary permit, until 2023 when it will be completely banned.

According to a State House media release, exposure to pesticides can lead to developmental problems in children, and exposure to the pesticide chlorpyrifos has sent people to the hospital here in Hawai‘i.

“Protecting the health and safety of our keiki and residents is one of my top priorities. We must protect our communities from potentially harmful chemicals. At the same time, Hawai‘i’s agriculture industry is extremely important to our state and economy. We will work with the Department of Agriculture, local farmers and the University of Hawai‘i as we seek safe, alternative pest management tools that will support and sustain our agriculture industry for generations to come,” said Gov. Ige in a media release.

“I’m so happy that my bill being was signed today, to protect our Keiki in schools, residents, and the environment from the very worst poisonous chemicals,” Senator Russell Ruderman commented over social media. “A landmark first step for Hawai‘i.”

Hawaii Island State Representative Richard Creagan pushed for the ban early in the 2018 session. Creagan noted that the pesticide chlorpyrifos has already been banned by many other nations but has not been prohibited by the U.S. Environmental Protection Agency, although the same agency had recommended that the chemical be banned from all food crops in 2015.

“Becoming the first state to ban chlorpyrifos to protect public health sends a message to our residents that we will protect them and to other states that they need to step up and protect their residents,” said Rep. Creagan, chair of the House Agriculture Committee. “We cannot stand by and do nothing when the lives of our children are at risk.”