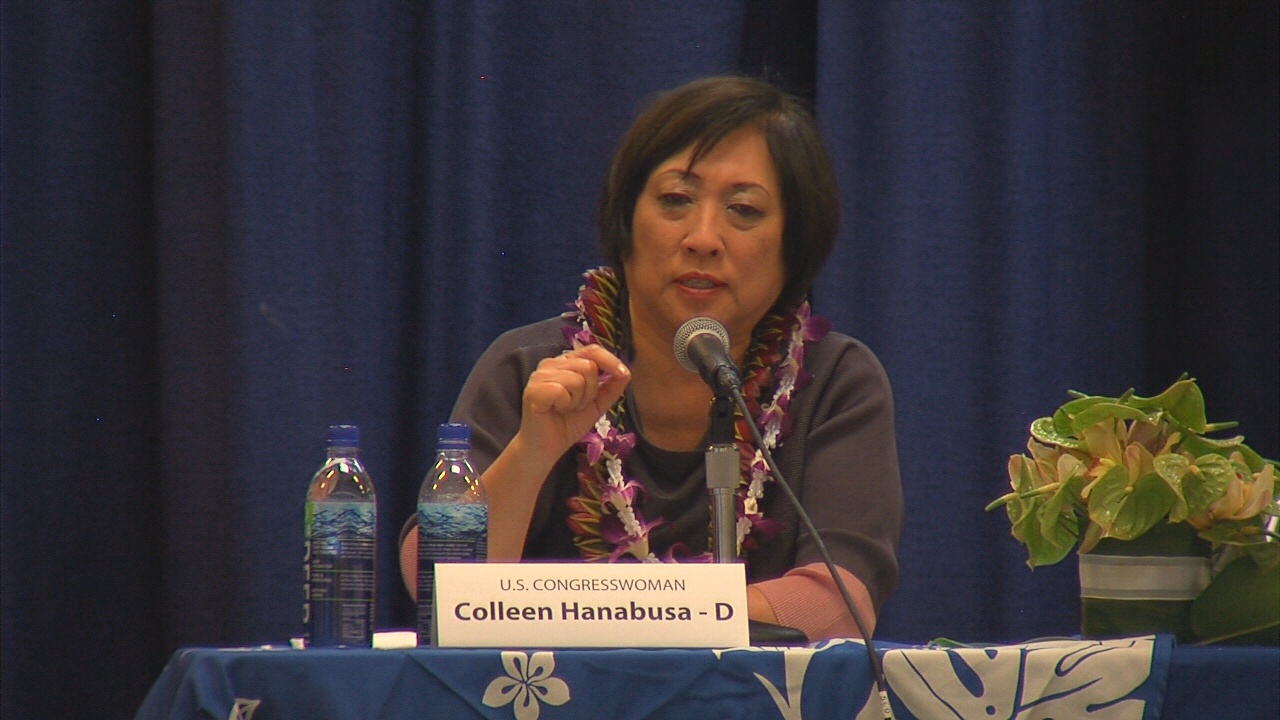 PUNA, Hawaii - The gubernatorial candidate wants to head-off disaster-related voting confusion, the likes of which she saw first-hand during her run for senate in 2014.

(BIVN) – Congresswoman and candidate for Hawaii governor Colleen Hanabusa is calling for “immediate action to protect Puna residents’ voting rights”, and to avoid the sort of disaster-related upheaval she witnessed in 2014, in the wake of Hurricane Iselle, during her run for U.S. Senate.

This media release was circulated by the Hanabusa campaign on Sunday:

Colleen Hanabusa called for immediate action to ensure equitable opportunities to vote, as yesterday’s Honolulu Star-Advertiser headline (“Election Confusion,” June 23, 2018) highlights another basic right the people of Puna and Hawai‘i Island are struggling to exercise while working through the devastation of the Kilauea eruption.

“The right to vote is one of our most sacred responsibilities as citizens, and our state has a fundamental responsibility to ensure all citizens have equitable opportunities to exercise that right, even under extreme circumstances,” Hanabusa said.

“With Pahoa Community Center and Pahoa High and Intermediate School unavailable for early and same-day walk-in voting, the Office of Elections is mailing absentee ballots out early to registered voters in the two precincts, as well as encouraging those voters to cast ballots at the other four early walk-in locations on the island — in Hilo, Kona, Pahala and Kamuela.

“As the paper’s headline points out, these directions create more confusion during an already difficult time. With the landscape permanently changed and so many people displaced after their homes were destroyed, how will officials ensure efficient delivery of all absentee ballots?”

Hanabusa saw what happened in August 2014, when confusion and miscommunication plagued Puna in the wake of a destructive Hurricane / Tropical Storm Iselle. Fallen trees prevented many from reaching the polls on primary election day, although voting at some Puna precincts were postponed to a later date due to the effects of the storm. Hanabusa and Brian Schatz were in a close race for U.S. Senate at the time.

“The state Office of Elections and Hawai‘i County should have a plan in place, specific to the unique needs of Puna voters, because this is not the first time Puna residents’ ability to vote has been thrown into doubt by natural disasters. In 2014, hurricane-turned-tropical storm Iselle lashed the island with high winds and rain that destroyed homes, shuttered businesses, and cut power to thousands of residents. Roads were blocked and polling stations were used as emergency shelters. At the time, plans to manage the vote seemed to change by the hour, and it was impossible to communicate to thousands of people during and in the aftermath of a storm.

“The state had four years to work with the county to prepare an emergency voting plan for this area, and it is disappointing to see that little has changed. People who lose their homes or businesses are focused on the essentials and getting through each day, not necessarily on an election 48 days away. This is why it is critical for election officials to be clear, fair and consistent, rather than add to the confusion. The people of Puna deserve better.

“I call on the Office of Elections to work with Hawai‘i County to immediately identify a location to host early walk-in voting in the area, not only leading up to but INCLUDING Aug. 11, the day of the Primary.

“Doing so will provide much needed clarity for residents dealing with upheaval and minimize confusion already being reported within the community.”