HAWAII ISLAND - During an 11 am conference call, scientists did their best to explain the various geological and atmospheric phenomena associated with the eruption of Kilauea Volcano. 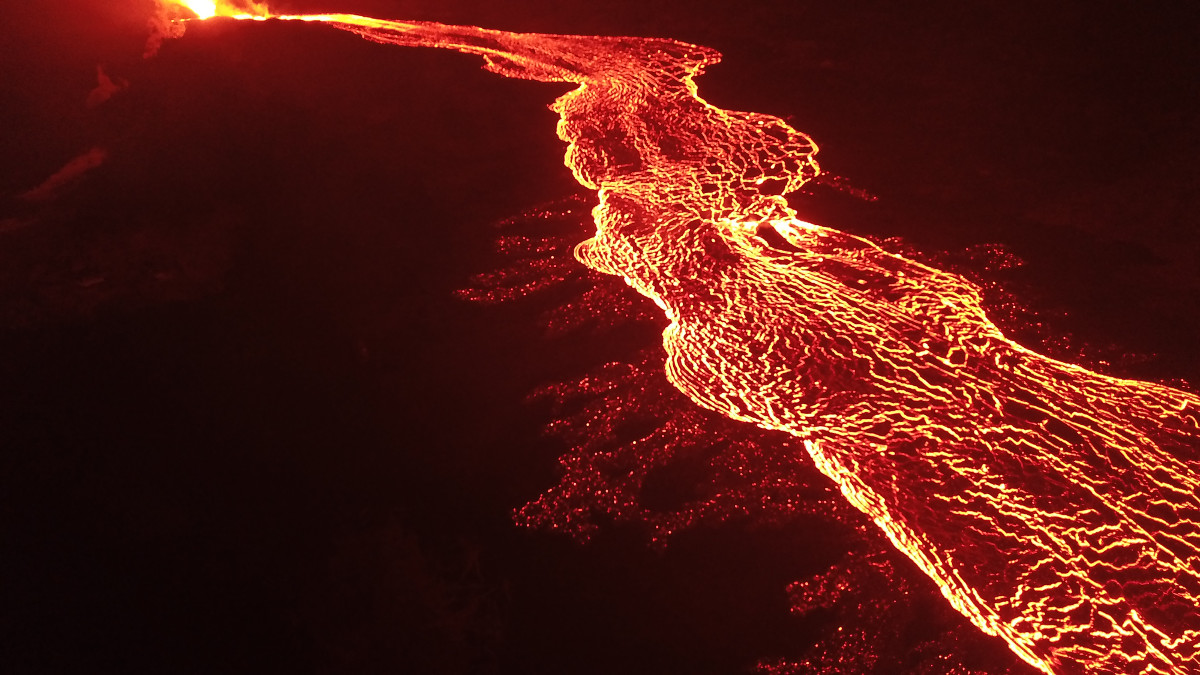 A USGS Mavic Pro drone image of the fissure 8 lava channel looking toward the vent. Overflows can be seen as incandescent spots beyond the channel margins. Drone flights and resultant imagery help scientists better identify areas of channel overflows and active flow advancement. Incandescence (glowing) lava is easier to identify in the dark versus during daylight hours. (USGS photo & caption)

(BIVN) – Scientists with the USGS Hawaiian Volcano Observatory, The Center for the Study of Active Volcanoes at UH-Hilo, and the National Weather Service took questions from media on a day where the interaction between the eruption on the lower East Rift Zone and the atmosphere dominated the discussion.

Meteorologist Robert Ballard talked about Monday’s locally heavy thunderstorms that are being generated due to a combination of light winds and pyrocumulonimbus clouds from the Fissure 8 / Kapoho ocean entry plumes.

A new “lavacam” focused on the lower East Rift Zone from the Canada-France-Hawaii Telescope on Mauna Kea shows the effect the eruption is having on the atmospheric conditions in Puna.

A unique USGS video recording of a dancing whirlwind above the fissure 8 lava channel was also discussed. “The vortex of rapidly swirling air entrained hot lava, flinging it meters away,” the Hawaiian Volcano Observatory observed. “The scientists maintained a safe distance, using a telephoto lens to take this video. The whirlwind lasted about 10 minutes, starting and stopping without warning.”

In another video, the June 30 collapse/explosion event at Kīlauea’s summit was recorded. “This video, taken by a USGS observer at Volcano House, captures rockfall (brown dust visible in the center right) along the bluff and a small plume rising from the Halema‘uma‘u crater,” the Hawaiian Volcano Observatory said. “Since May 16, these collapse/explosion events have occurred on average, about every 28 hours. As magma from the shallow reservoir beneath the summit drains into the East Rift Zone, it slowly pulls away support of the rock above it. The crater floor responds by incrementally collapsing, which produces these events.”

“Lava boats”, the huge rocks that appear to be floating along the current of the lava channel, were also discussed. Scientists – who suspect the lava boats are not floating – believe the giant features may have broken off the Fissure 8 cone, or else could be a dislodged part of the channel wall.