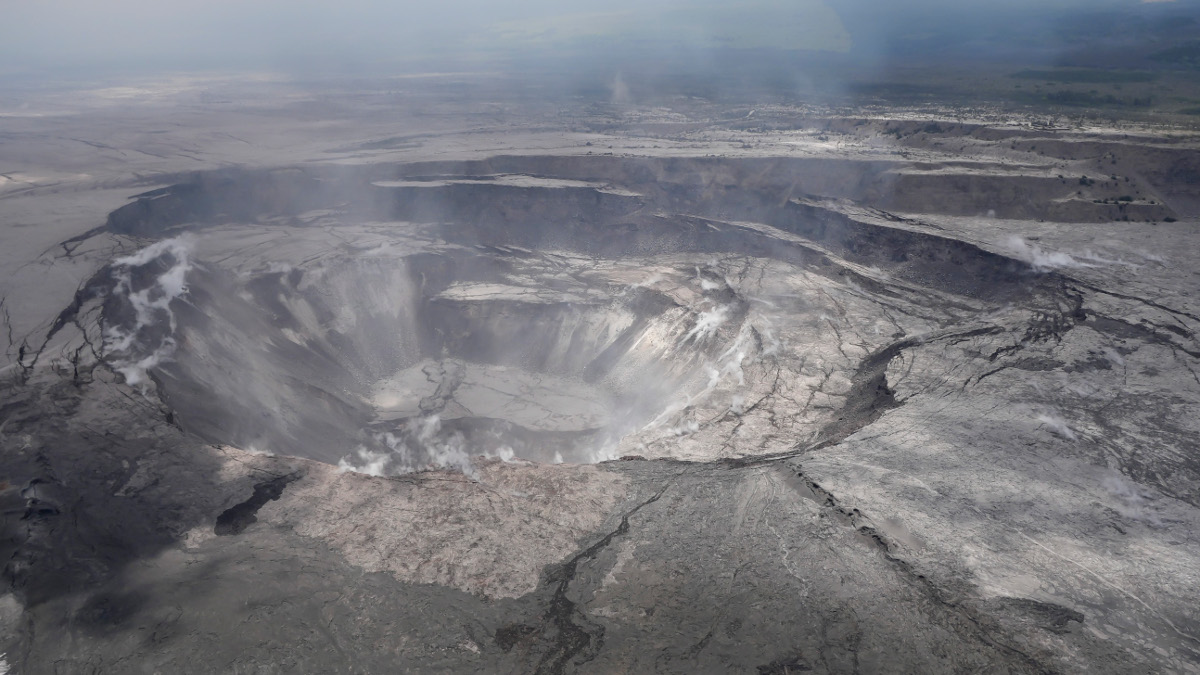 PHOTO: As magma in a shallow reservoir beneath the summit drains into the East Rift Zone, the ground above it sags, cracks and subsides. The Halema‘uma‘u crater has dropped about 400 m (1300 ft) between early May and late June. Inward slumping of the surrounding Kilauea Crater floor has doubled the diameter of Halema‘uma‘u. The large flat block visible inside the enlarged Halema‘uma‘u is a down-dropped piece of the crater floor. View is toward the southwest. USGS photo on June 18, 2018, by Kyle Anderson.

HAWAII VOLCANOES NATIONAL PARK - This week, the USGS Hawaiian Volcano Observatory asks: How does the current activity at Kīlauea caldera stack up against those of other volcanoes worldwide?

(BIVN) – Dramatic changes are underway at Kīlauea. At 2:55 a.m. HST on Sunday morning (July 8), another collapse explosion event occurred at Kīlauea’s summit. The energy released by the event was equivalent to a Magnitude 5.4 earthquake.

The summit activity is the subject of this week’s Volcano Watch article, written by U.S. Geological Survey`s Hawaiian Volcano Observatory scientists and colleagues.

How does the current activity at Kīlauea caldera stack up against those of other volcanoes worldwide?

We are currently witnessing extraordinary events at the summit of Kīlauea Volcano. For weeks the summit has subsided both in a continuous fashion and in incremental and jolting drops. As Kīlauea is being reshaped before our eyes, how does the current activity compare to similar collapses at other volcanoes in the world, or even to previous collapses at Kīlauea.

The word “caldera” tends to conjure an image of a huge crater that was the product of a voluminous eruption, like Crater Lake (Oregon) or Yellowstone (Wyoming). Indeed, those are calderas—they formed when large explosions emptied subsurface magma chambers, causing the overlying surface to collapse. But calderas can also form without large explosions.

Calderas are common features on shield volcanoes, like Kīlauea and Mauna Loa, and they are not usually associated with large explosive eruptions. Instead, they form when magma drains from beneath the volcano, perhaps to feed some distant intrusion or eruption on the volcano’s outer flank—exactly what is happening at Kīlauea’s lower East Rift Zone. There have actually been a few collapse events at volcanoes around the world in the past few decades.

Piton de la Fournaise volcano, on Réunion Island in the Indian Ocean, is similar to Kīlauea in many respects—it is a hotspot volcano that erupts frequently from its summit and rift zones. In 2007, a major (for that volcano) flank eruption occurred, and within a week the summit began to subside. Over the course of just a few days, an area about 1 km (0.6 mi) across dropped by more than 300 m (~1000 feet). Seismicity indicates that the crater floor dropped in a series of down-dropping events, rather than all at once.

Collapse was also observed at Miyakejima volcano, in Japan. In 2000, magma left the volcano’s summit reservoir intruded beneath the submarine flank of the volcano. About two weeks after the intrusion started, the summit crater began to deepen in a series of step-like events accompanied by seismic events (much like what is happening today at Kīlauea). Over the course of over a month, a section of the volcano’s crater about 1.6 km (1 mi) across dropped by 450 m (~1500 ft). The collapse was accompanied by a few explosions, some of which dusted areas of the island with ash and produced cold pyroclastic surges.

The 1968 eruption of Fernandina volcano, in the Galápagos, provides another example of caldera formation. Over the course of about a week, the 4 km x 6.5 km (2.5 mi x 4 mi) caldera dropped in places by 300 m (almost 1000 ft). It is thought that a submarine eruption or intrusion must have preceded the collapse. Importantly, and unlike Piton de la Fournaise and Miyakejima, significant explosive activity accompanied the collapse of Fernandina’s caldera, sweeping the summit area and parts of the volcano’s flanks with pyroclastic surges.

Earlier calderas have formed and filled at Kīlauea’s summit. We know of at least two such cycles. One started about 2,200 years ago, before any humans were on the island to observe the activity. After that caldera was subsequently filled with lava flows, a new one formed sometime between the years 1470 and 1510 CE. That caldera-forming event may have made its way into Hawaiian mythology as part of Pele and Hiʻiaka saga.

This later collapse “lost” a volume of about 5 cubic kilometers (1.2 cubic miles), about 4 times that of Fernandina’s 1968 collapse and 10 times what we have observed so far at Kīlauea. The caldera floor might have been at least 600 m (almost 2,000 ft) deep when the collapse stopped. We know that formation of this caldera was not accompanied by a major explosion, but it was followed by three centuries of repeated explosive activity.