SOUTH POINT, Hawaii - Waiki, considered armed and extremely dangerous, was the target of an island-wide manhunt following the murder of Officer Bronson Kaliloa.

(BIVN) – 33-year old Justin Joshua Waiki, the suspect in the murder of officer Bronson Kaimana Kaliloa, has been killed in a South Point incident that also left another Hawaii County Police officer injured.

On (July 20), acting on information received on suspect Justin Waiki, police responded to the area of South Point in the Kaʻū district.

At about 2:45 p.m., police officers established a checkpoint where officers stopped an SUV. Members of the Department’s Special Response Team, (SRT), were conducting checks within the vehicle when the suspect, Justin Waiki opened fire wounding an officer. Officers present returned fire resulting in the death of Waiki.

The wounded officer, an SRT Sergeant, is a police veteran with 12 years of service. He was taken by Fire Rescue to the Hilo Medical Center for treatment of his injuries.

During the gunfire, a female who was hiding in the SUV was shot and also taken to Hilo Medical Center for treatment.

Three other individuals, who are suspected in aiding the suspect were arrested at the scene for Hindering Prosecution in the first degree and remain in custody at this time.

The investigation is continuing.

Just before 4 p.m. police issued an alert telling residents to avoid South Point Road, in Ka’u, adding that the area is closed at Kamaoa Road and below due to police activity.

An island-wide manhunt intensified today, following the Tuesday evening traffic stop on Highway 11 in Mountain View that turned deadly. Waiki allegedly shot Officer Kaliloa in the neck and leg area. Kaliloa died at Hilo Medical Center after undergoing surgery. Waiki managed to escape police by fleeing into the brush on foot. He has been on the run ever since, and police have been in pursuit.

Waiki was considered armed and extremely dangerous and residents were warned that he should not be approached.

The hunt for Waiki led police to various locations, often acting on tips from the public. One tip led police into a tense officer-involved shooting and pursuit in Kona, resulting in the arrest of 25-year-old Harvey Damo Jr., and 25-year-old Shevylyn Klaus, both of Hilo.

On Wednesday, an emotional Police Chief Paul Ferreira called the death of Kaliloa the most difficult moment in his law enforcement career. During a press conference, the chief wanted to “put a face to the name” of the fallen officer “to show how senseless his death was, by bringing the personal side of his life to bear.” 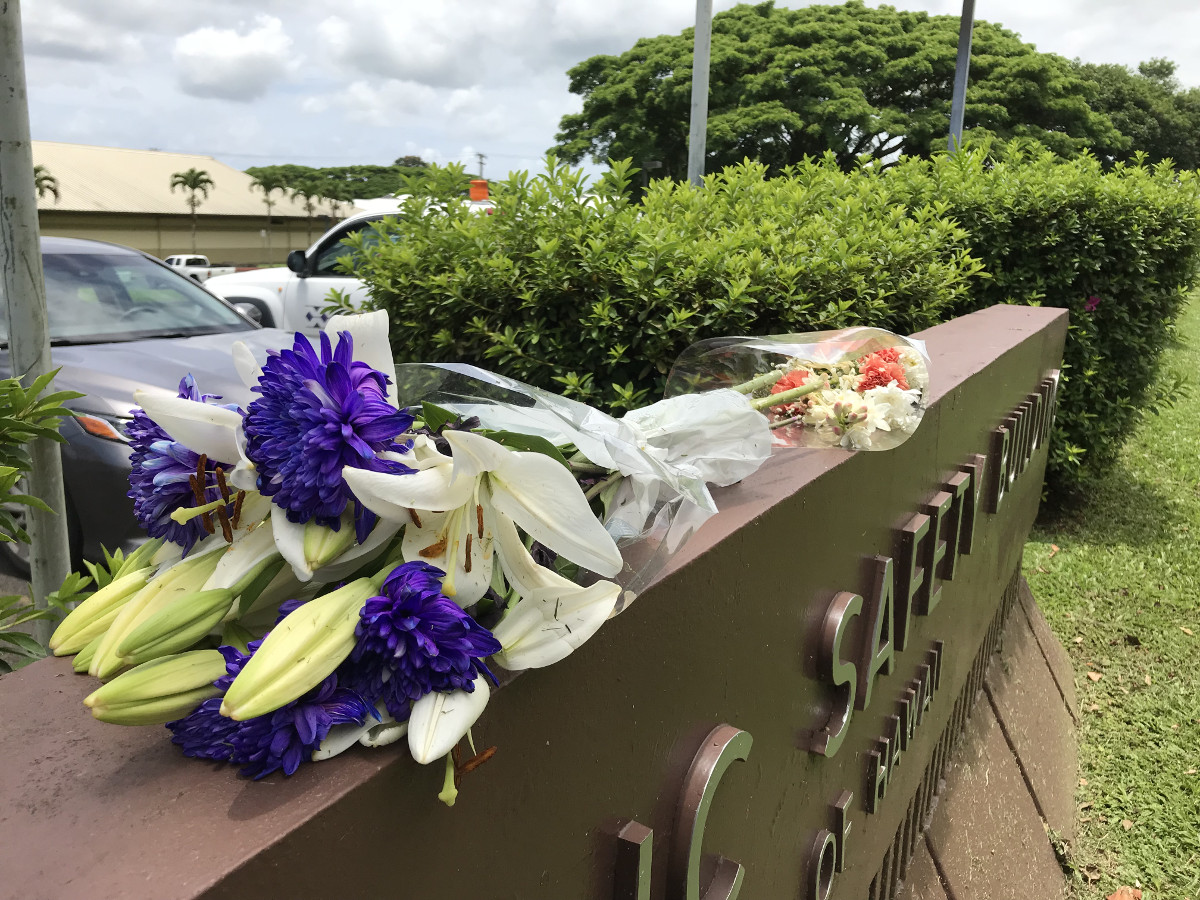 Flowers left by the public at the Hawaii Police Station in Memory of Fallen Officer Bronson K. Kaliloa (police photo).