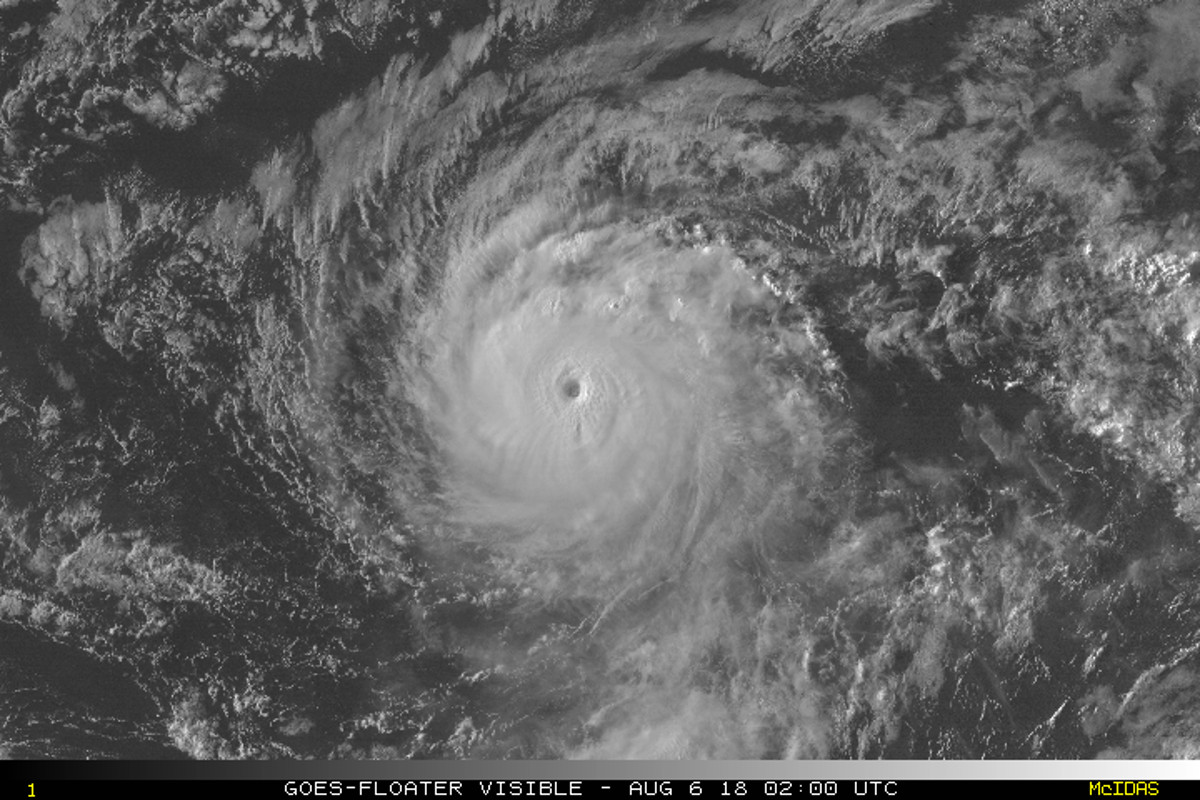 (BIVN) – The small but powerful Hurricane Hector is expected to weaken and pass south of Hawai‘i Island sometime on Tuesday night or early Wednesday morning, but government officials are getting prepared just in case.

Hector is currently 1,100 miles east southeast of Hilo and is about to cross into the Central Pacific Basin as a Category 4 hurricane. Maximum sustained winds are near 140 mph (220 km/h) with higher gusts.

In a rare Sunday media release, Hawai‘i County reported that local, Federal and State agencies, along with private entities, met on Sunday at the Civil Defense Agency’s Emergency Operations Center in Hilo for an orientation briefing. “Mayor Harry Kim said the session was aimed at getting staff familiar with the background regarding the storm, which was approaching the 140-degree longitude boundary into the Central Pacific,” the release stated.

Also on Sunday, the U.S. Coast Guard Captain of the Port set Port Condition WHISKEY for Hawai‘i County, which means tropical storm force winds, 39 mph or higher, are possible within 72 hours. All ocean-going commercial vessels and oceangoing barges greater than 200 gross tons should make plans for departing the port. The ports of Hilo and Kawaihae are currently open to all commercial traffic, the USCG says, and all transfer operations may continue while Whiskey remains in effect.

The Coast Guard reminds mariners there are no safe havens in these facilities, and ports are safest when the inventory of vessels is at a minimum. Pleasure craft operators are advised to seek safe harbor. “If and when the Captain of the Port sets port condition YANKEE, meaning sustained gale force winds are expected within 48 hours, all vessels should be preparing to complete cargo operations and depart port within 36 hours,” the Coast Guard stated. 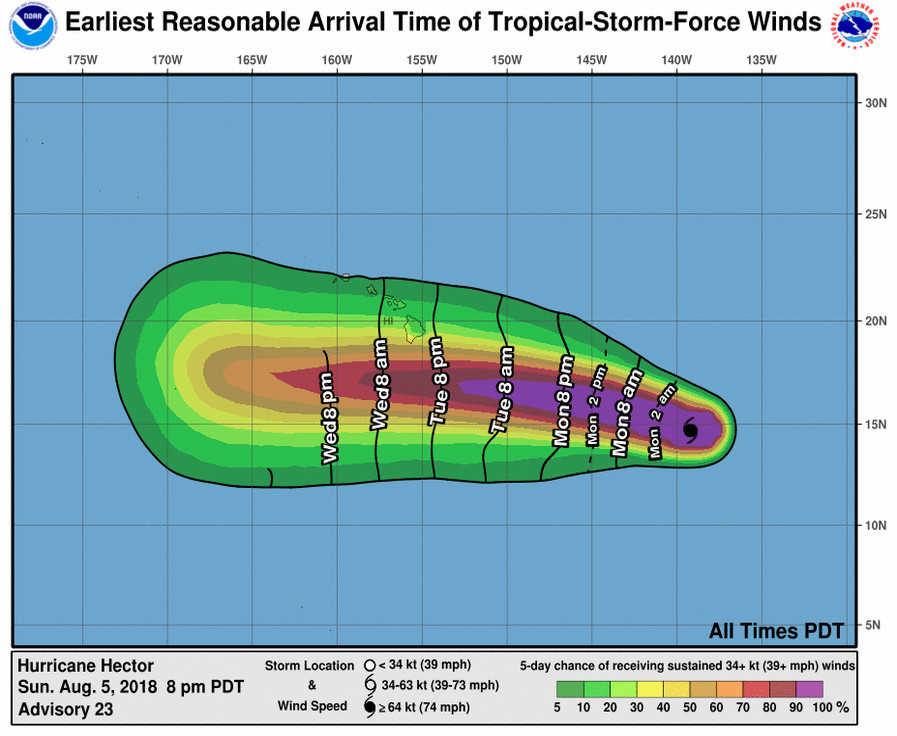 Hector’s Hurricane-force winds extend outward up to 30 miles from the center and tropical-storm-force winds extend outward up to 105 miles. “Hector has changed little in organization since the previous special advisory,” the National Hurricane Center in Miami, Florida stated at 5 p.m. HST, its final update before turning the duties over to the Central Pacific Hurricane Center. “The forecast track takes the cyclone over an area of cooler water between 24-60 h and into a drier air mass after 60 h, and based on this the intensity forecast continues the trend of the previous forecast in showing a gradual weakening through the forecast period. There are two caveats to this forecast, however. The first is that Hector will move over warmer water after 60 h, and the HWRF amd LGEM models are suggesting re-intensification could occur from 96-120 h. Second, the environment of light easterly shear and moderate sea surface temperatures could allow Hector to evolve into an annular hurricane, which would cause it to stay more intense than the guidance and the official forecast are indicating.” 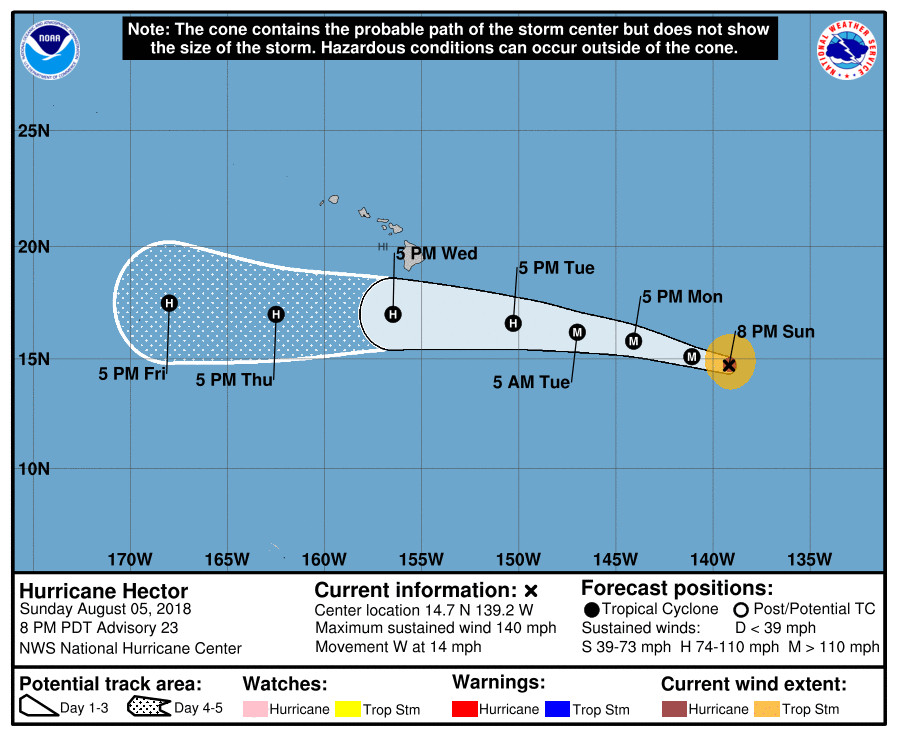 “The hurricane is starting a northward nudge that the track models have been advertising, and the initial motion is now 280/12,” the forecasters said. “The subtropical ridge to the north of Hector should steer it west-northwestward with an increase in forward speed for the next 24-36 h, followed by a more westerly motion to the south of the Hawaiian Islands for the remainder of the forecast period. Track guidance has become less divergent since yesterday, and the new forecast track lies near the center of the track guidance envelope.”

The National Weather Service in Honolulu wrote this Sunday afternoon at 4: 18 p.m. HST:

Swells from Hector are expected to reach the eastern coastal waters Monday and then gradually increase through Wednesday. Surf will increase gradually along east facing shores of the Big Island early in the week, then transition to a south swell toward the end of the week as the system passes south of the state. Based on the latest guidance, large surf is expected over exposed shorelines on the Big Island and East Maui by the middle of this week. Shorelines of the smaller islands will be less impacted as they will be somewhat shadowed by the Big Island and Maui until Hector moves further west. We are also entering a period of high astronomical tides this week, so low lying coastal areas may have some coastal inundation issues. Stay tuned for the latest updates on Hector and its potential impacts on winds, seas, and surf across the area.