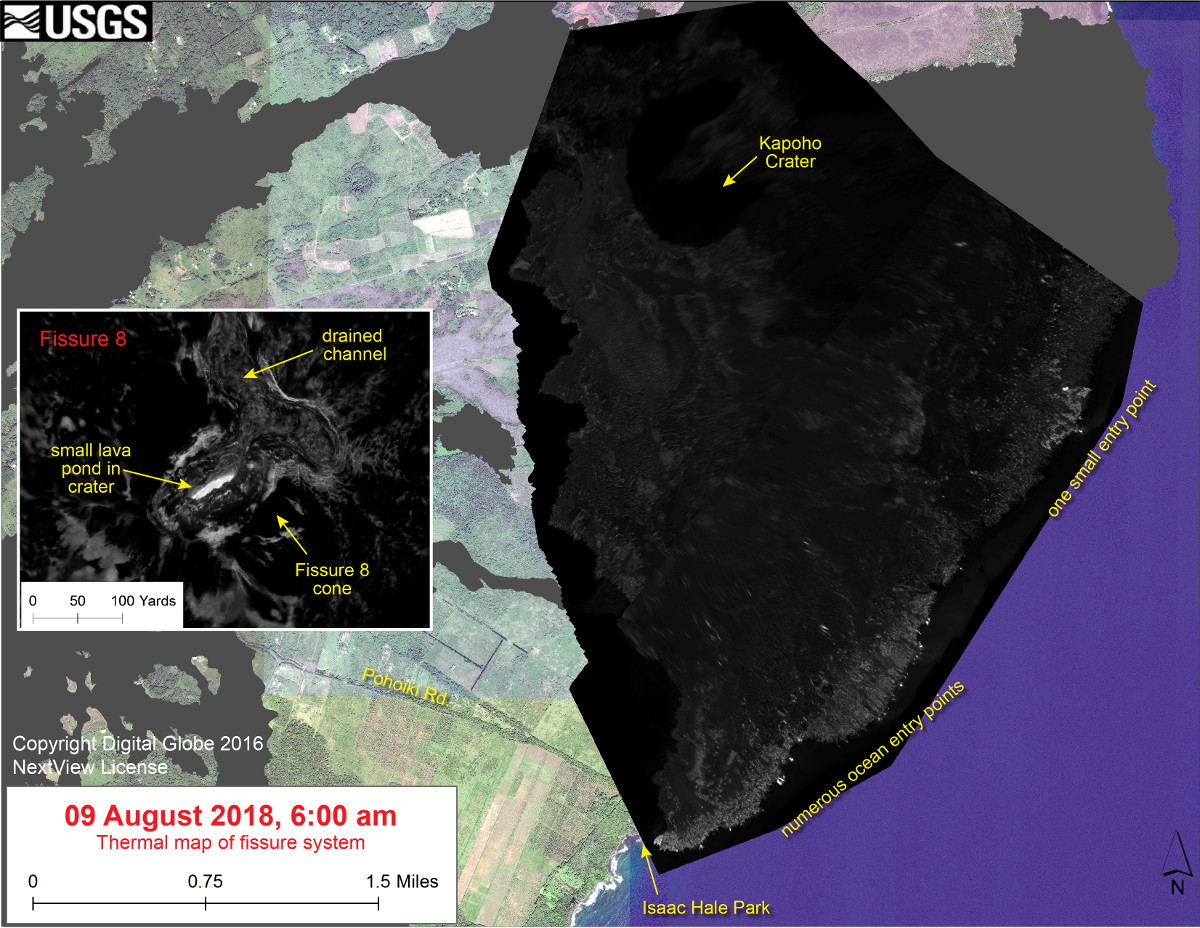 (USGS) This thermal map shows the fissure system and lava flows as of 6 am on Thursday, August 9. Residual lava in the Fissure 8 flow continues to drain, feeding numerous small ocean entries (shown in main map). In the Fissure 8 cone there was a small, mostly crusted, lava pond (shown in small inset map). The black and white area is the extent of the thermal map. Temperature in the thermal image is displayed as gray-scale values, with the brightest pixels indicating the hottest areas. The thermal map was constructed by stitching many overlapping oblique thermal images collected by a handheld thermal camera during a helicopter overflight of the flow field. The base is a copyrighted color satellite image (used with permission) provided by Digital Globe.

The Hawaiian Volcano Observatory reports that eruptive activity remains at reduced levels at Kilauea Summit and the lower east rift zone from fissure 8. Seismic activity at the summit is low with few earthquakes. Field crews report a lava pond remains confined to fissure 8. HVO continues to monitor Kilauea for possible signs of reactivation.

Motorists on Highway 11 between the 28 and 32 mile marker are advised to stay on the pavement, be alert for changes in road conditions, and drive with caution.

The plates on Highway 130 are stable, motorists are reminded to slow down while traveling through the area.

The Disaster Recovery Center, located at the Pahoa Community Center is open.

Yesterday, the USGS Hawaiian Volcano Osbervatory noted that the “crusted lava pond was observed deep within the fissure 8 cone this morning. It may be at a depth near the pre-eruption ground surface.”

Yesterday, lava continued to ooze into the ocean and was still active near Pohoiki. “Pohoiki still stands, but is now basically surrounded by Pele’s residual lava as she continues to slowly encroach on the boat ramp,” observed videographer Mick Kalber, recording video from above on a Paradise Helicopters flight. “Lava has flowed in front of the parking lot and and black sand has reached all the way up to the boat ramp. However, the boat ramp was still standing and usable as of this morning. Only a few lava fingers appeared active in the area, but she continues to slowly push forward. Hopefully, the lack of new lava entering the system will stop Pele’s advance on Pohoiki Bay… again we’ll see. She can’t go mush further without severely impacting the use of the harbor.”

“Gas measurements of the Puʻu ʻŌʻō plume taken on August 6 and 7 indicated a reduced SO2 emission rate lower than the August 3 measurement and similar to what has been observed over the past three months,” the USGS Hawaiian Volcano Observatory stated on Thursday. “No active lava was observed in the crater on an overflight on August 6th. This morning, the steam plume appears wispy and intermittent.”