HAWAII ISLAND - A gas plume billows up from Fissure 8, and low-level, intermittent steaming was observed from a handful of the other inactive fissures, the USGS reported on Saturday. 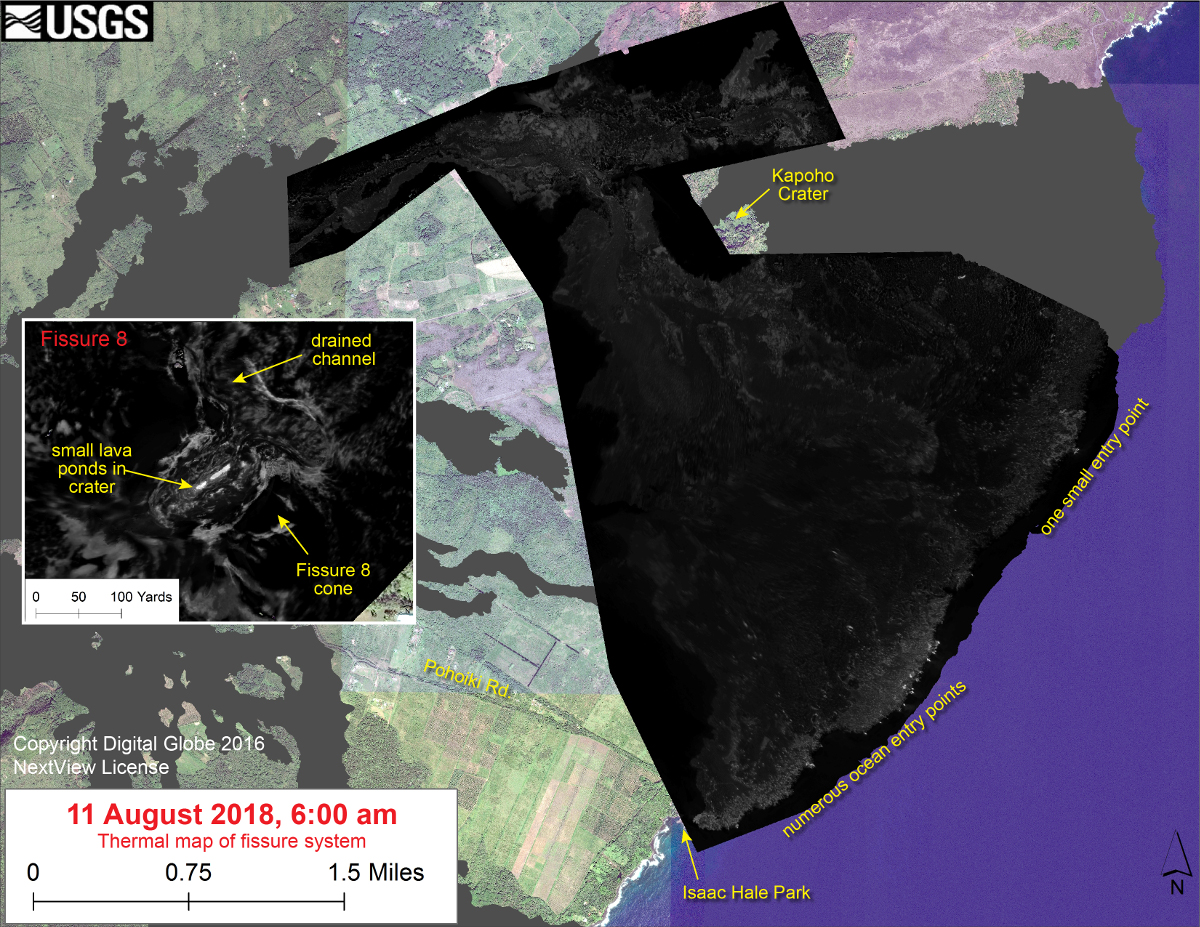 (USGS) This thermal map shows the fissure system and lava flows as of 6 am on Saturday, August 11. Residual lava in the Fissure 8 flow continues to drain, feeding numerous small ocean entries (shown in main map). In the Fissure 8 cone there were two small lava ponds (shown in small inset map). The black and white area is the extent of the thermal map. Temperature in the thermal image is displayed as gray-scale values, with the brightest pixels indicating the hottest areas. The thermal map was constructed by stitching many overlapping oblique thermal images collected by a handheld thermal camera during a helicopter overflight of the flow field. The base is a copyrighted color satellite image (used with permission) provided by Digital Globe. 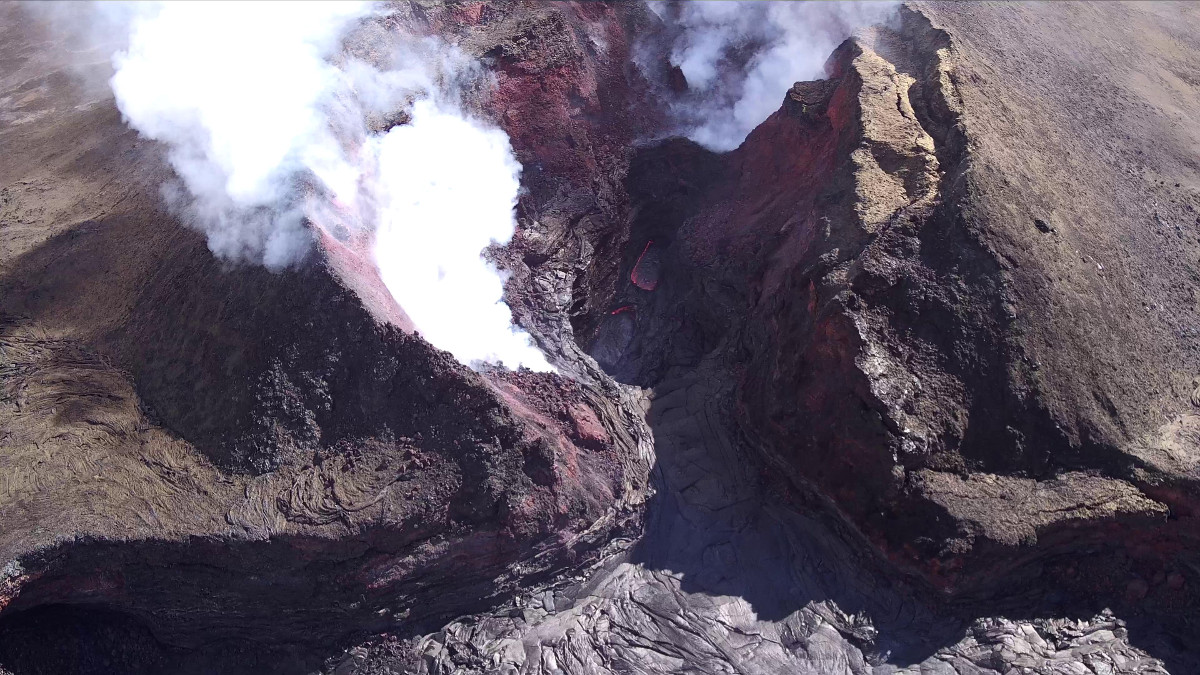 (USGS) The UAS team (Unmanned Aircraft Systems) flew a mission over fissure 8 to assess conditions within the cinder cone. As shown, fissure 8 contains two small ponds deep within its crater. One pond slowly circulates with an incandescent surface while the other pond is stagnant with a crusted top.

A small lava pond remains in the Fissure 8 cone. “Observations yesterday show the pond to be mostly crusted over with a small area glowing,” civil defense said. “Fissure 8 along with other fissures continue to release gas.”

Lava was reported oozing at several points along the Kapoho Bay and Ahalanui coastline creating a wispy laze plume. 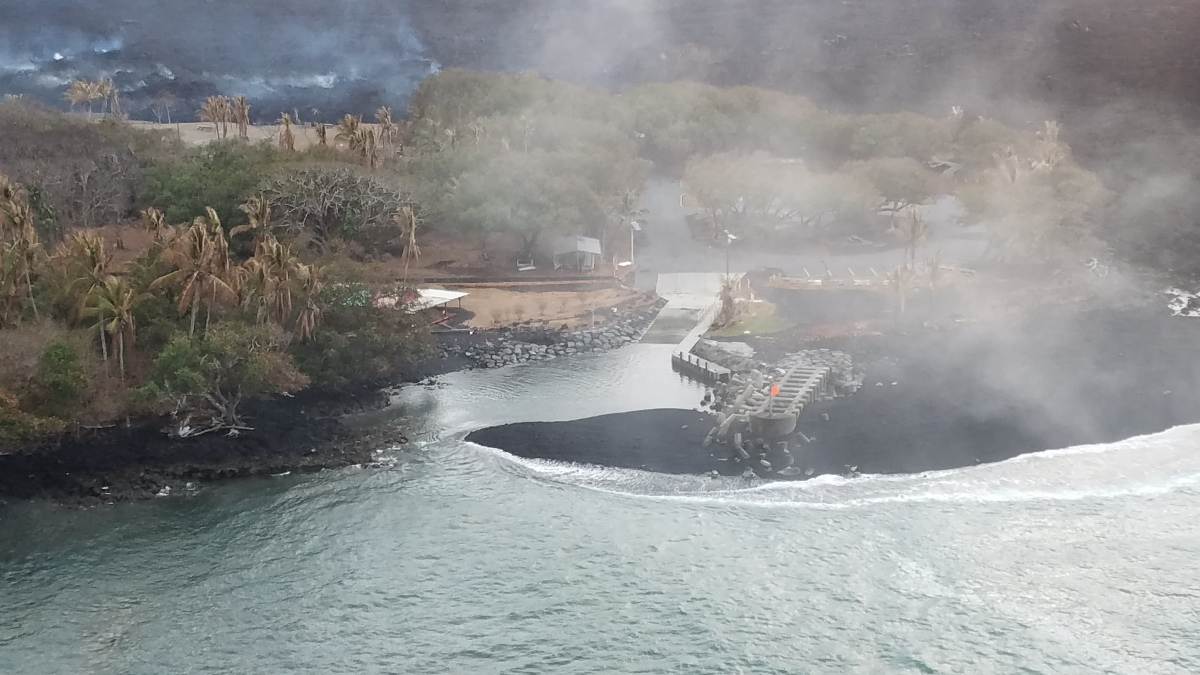 (USGS) Close view of the Pohoiki boat ramp during this morning’s overflight. The southern-most flow margin has not advanced significantly toward the Pohoiki boat ramp, but black sand and larger fragments from the entry areas have washed ashore to create a sand bar and beach at this site.

Despite the low emission rates, SO2 plumes were blown toward populated areas in east Hawai’i by SE winds on August 9, and many individuals reported detecting the smell of sulfur. Weather conditions contributed to this, but in addition, as the eruption vents cool down, small amounts of H2S are generated. The human nose can detect H2S at very low levels, adding to the overall perception of increased sulfur emission. 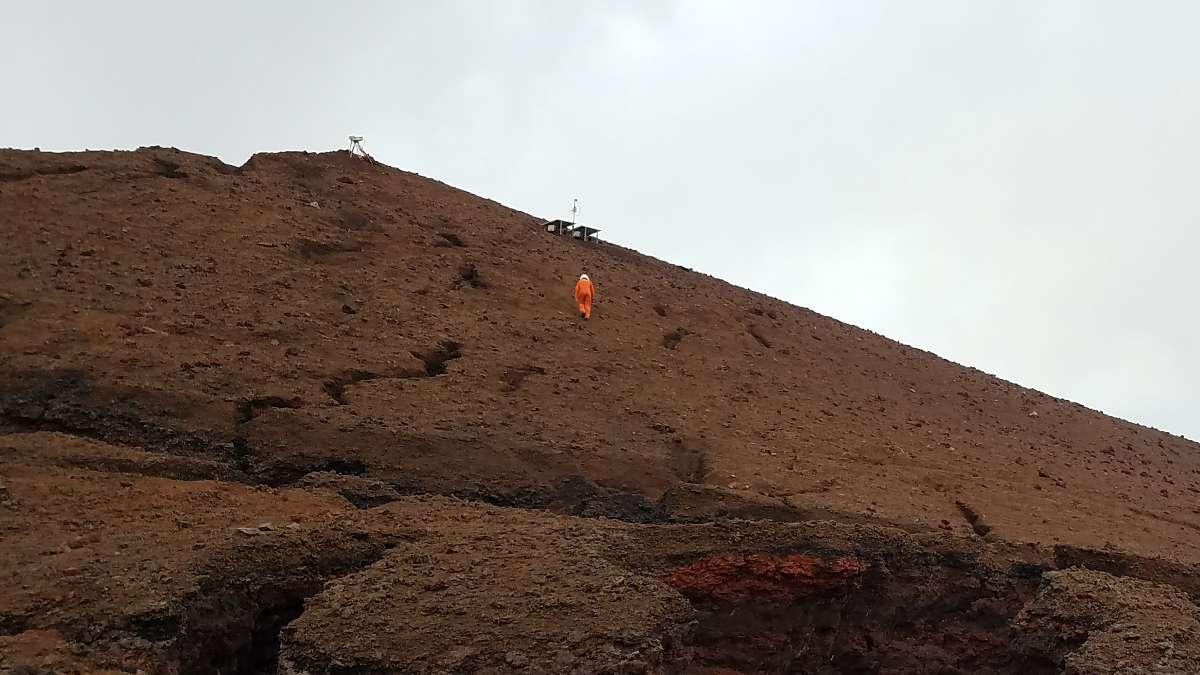 (USGS) Geologist hikes to the rim of Pu‘u ‘Ō‘ō to clean the external housing lenses of two webcams on the rim of the new crater that formed on April 30, 2018.

“Although a lull in activity continues, it is common for eruptions to go through periods of diminished output, or to pause completely, only to reactivate days or weeks later, or longer,” civil defense stated. “Activity could occur at any time. Residents should remain informed and heed Hawaii County Civil Defense messages and warnings.”

The Disaster Recovery Center, located at the Pahoa Community Center is closed today but will be open tomorrow.