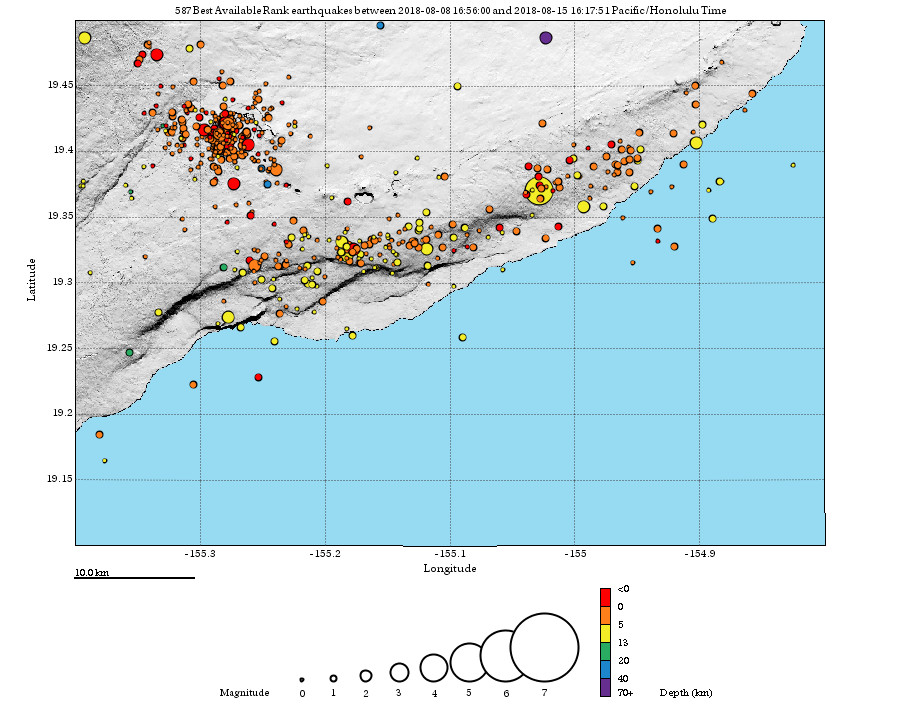 (BIVN) – Kīlauea Volcano has remained quiet for over a week now, but officials say it is still too soon to tell if it is “a temporary lull” or the end of the lower East Rift Zone eruption and/or summit collapse activity.

USGS Hawaiian Volcano Observatory scientist-in-charge Tine Neal spoke about the pause in the eruptive activity following a public meeting Tuesday night in Pahoa. Earlier that day, the USGS posted a lengthy “Activity and Hazards Overview” on its website, which read:

Kīlauea Volcano has remained quiet for over a week now, with no further collapse events at the summit, and, with the exception of a small, crusted-over pond of lava deep inside the fissure 8 cone and a few scattered ocean entries, no lava flowing in the lower East Rift Zone (LERZ).

Earthquake and deformation data show no net accumulation, withdrawal, or significant movement of subsurface magma or pressurization as would be expected if the system was building toward a resumption of activity.

It is too soon to tell if this change represents a temporary lull or the end of the LERZ eruption and/or summit collapse activity. In 1955, similar pauses of 5 and 16 days occurred during an 88-day-long LERZ eruption. During the Mauna Ulu eruption (1969-1974), a 3.5 month pause occurred in late 1971.

Despite the eruptive pause, hazardous conditions remain in the LERZ and at the summit as described below:

– The fissure 8 crater still hosts a small amount of lava that currently does not enter the existing channel. Should the eruption rate increase, the configuration of outflow around the vent could change, sending lava in new directions. Possible flow paths to the north have been outlined in HVO’s 2018 lower East Rift Zone hazard assessment (https://volcanoes.usgs.gov/vsc/file_mngr/file-185/USGS%20Preliminary%20Analysis_LERZ_7-15-18_v1.1.pdf).

– Resupply of magma could lead to the reactivation of fissures other than fissure 8, or the opening of entirely new fissures along the ERZ, potentially leading to new areas being inundated by lava.

– The new lava flow field in the LERZ includes large areas of still-hot, rugged, and unstable lava surfaces that are subject to collapse.

– Sulfur dioxide (SO2) gas emissions have greatly decreased from LERZ vents, but high levels of SO2 may persist in downwind areas.

– Tephra (fragments of glassy lava) have accumulated to thicknesses of more than several feet near fissure 8. This material breaks down over time into small, glassy particles that can be blown on the wind and create an eye, respiratory, and skin irritant. Disturbing the tephra by sweeping, shoveling, or driving over it will break the fragile pieces into a glassy dust. The tephra can also conceal underlying hazards such as ground cracks, holes, and debris from destroyed structures.

– The LERZ ocean entry is minimally active at this time, but continued laze and lava delta collapses remain a concern. Hydrovolcanic explosions are much less of a concern now, as they require high eruption rates with lava entering the ocean, but they may still occur.

– At the summit, additional earthquakes, rockfalls, and ground cracking can occur with no warning. Steep crater walls destabilized by months of earthquakes could be prone to collapse for weeks or months to come, even without further ground shaking (https://volcanoes.usgs.gov/vsc/file_mngr/file-184/Summit%20scenarios_7-5-18.pdf).

– Summit SO2 emissions rates are lower than at any time since late 2007 and are not currently a hazard.

– Resuspended ash in the summit region remains a local hazard during strong winds.

– As the summit continues to adjust to changes in the underlying magmatic system, additional, and potentially damaging, earthquakes are possible. Hawai’i is known for frequent earthquakes, so all residents should be prepared for damaging earthquakes.

– If magma returns to the shallow reservoir beneath Kilauea’s summit, groundwater could encounter subsurface regions of high temperature, prompting explosions of uncertain size.

– More dangerous explosive activity at the summit remains very unlikely in the near term. For more information, see https://volcanoes.usgs.gov/vsc/file_mngr/file-184/Summit%20scenarios_7-5-18.pdf

– Aftershocks from the May 4, 2018 M6.9 earthquake below Kilauea’s south flank will continue for months more and could produce moderate, damaging events at any time.

The Hawaiian Volcano Observatory (HVO) will continue to closely monitor Kīlauea’s activity, including overflights of the rift zone and summit as needed, supplemented with unmanned aerial systems (UAS) flights and daily visual observations. Field crews will be deployed to the LERZ and the summit areas to collect data and to install and repair monitoring instruments. HVO will continue to issue daily updates and additional messages as needed.