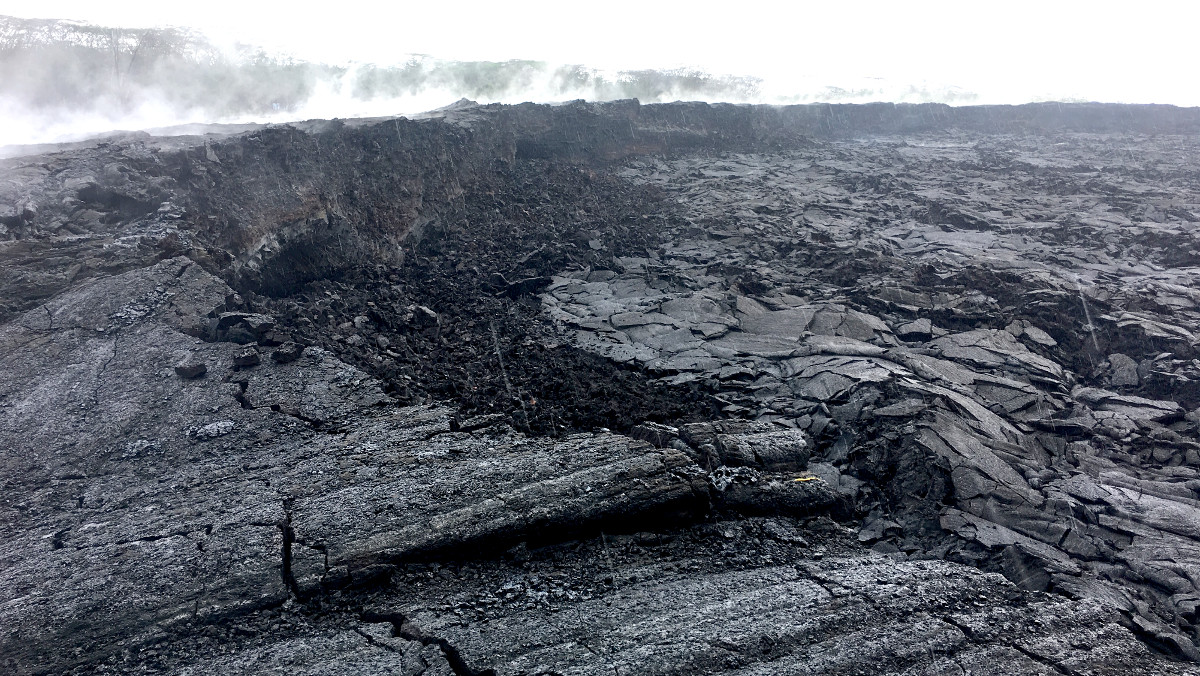 HAWAII ISLAND - In light of the reduced eruptive activity at Kīlauea Volcano over the last several days, HVO is lowering the Alert Level for ground based hazards. 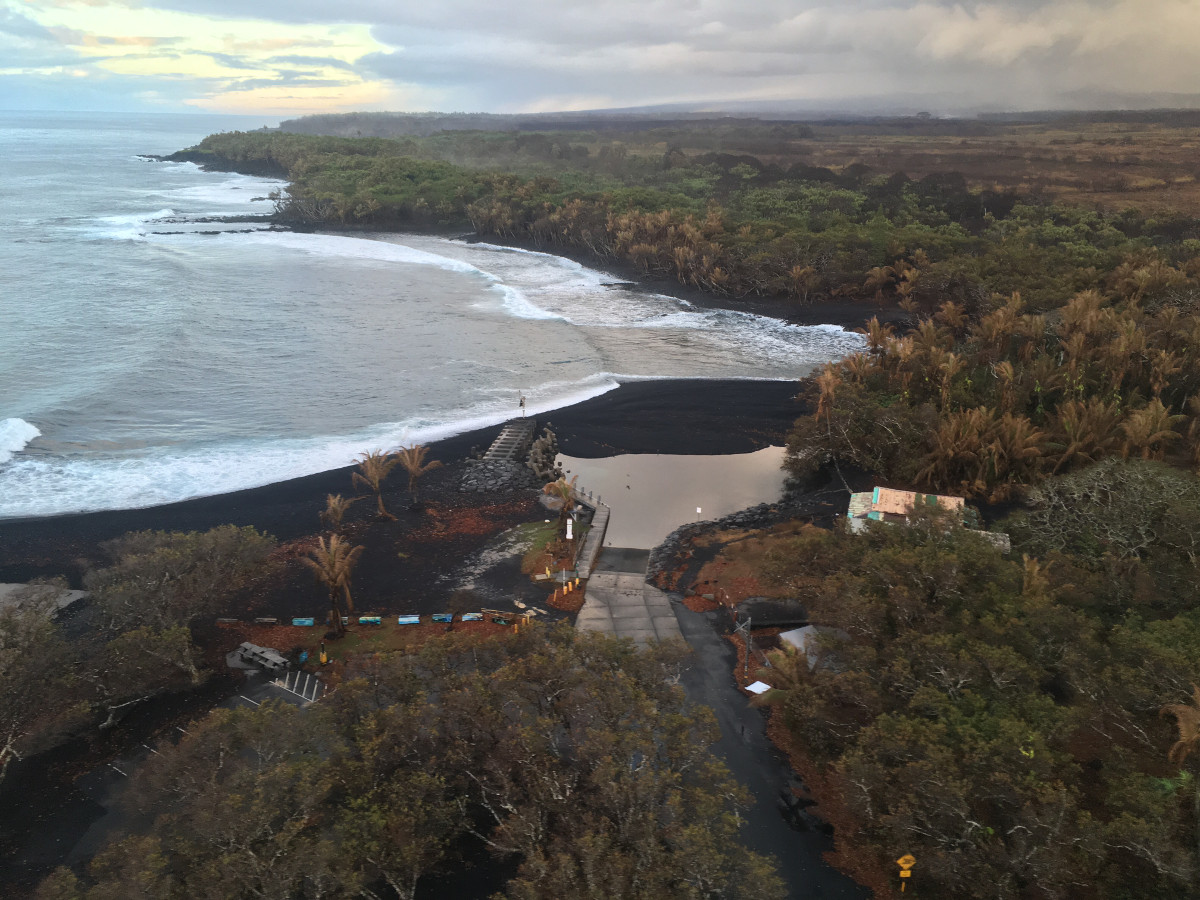 (USGS) View of Isaac Hale Beach Park during this morning’s HVO overflight. Black sand transported to the southwest by longshore currents now blocks the entrance to the Pohoiki boat ramp.

(BIVN) – The USGS Hawaiian Volcano Observatory issued a new Volcanic Activity Notice on Friday, announcing that the Alert Level for Kīlauea Volcano was being lowered from WARNING to WATCH.

The change comes as the reduced eruptive activity at Kīlauea has lasted for several days, indicating “that the hazards posed by crater collapse events (at the Kīlauea summit) and lava flows (Lower East Rift Zone; LERZ) are diminished,” scientists say.

“However, the change does not mean with absolute certainty that the LERZ eruption or summit collapses are over. It remains possible that eruption and collapse activity could resume,” the USGS HVO wrote. “Although no signs of imminent hazardous activity are present at this time, residents of the region near recently active fissures should stay informed, heed Civil Defense warnings, and be prepared, if necessary, to self-evacuate.”

The Hawaiian Volcano Observatory offered this “Background and Prognosis” in Friday’s notice:

Kīlauea Volcano has remained quiet for well over a week now, with no collapse events at the summit since August 2. Except for a small, crusted-over pond of lava deep inside the fissure 8 cone and a few scattered ocean entries, lava ceased flowing in the LERZ channel on August 6. Sulfur dioxide (SO2) emissions rates at the summit and LERZ are also drastically reduced (the combined rate is lower than at any time since late 2007).

It remains too soon to tell if this diminished activity represents a temporary lull or the end of the LERZ lava flows and/or summit collapses. In 1955, similar pauses of 5 and 16 days occurred during an 88-day-long LERZ eruption. During the Mauna Ulu eruption (1969-1974), a 3.5 month pause occurred in late 1971.

HVO will continue to record detailed visual observations and scrutinize incoming seismic, deformation, and gas data, looking for evidence of significant movement of magma or pressurization as would be expected if the system was building toward renewed activity.

Whether this is a pause or truly the end of the current eruption, certain hazardous conditions remain in the LERZ and at the summit as described below:

The new lava flow field in the LERZ includes large areas of still-hot, rugged, and unstable lava surfaces that are subject to collapse.

SO2 gas emissions have greatly decreased from LERZ vents, but high levels of SO2 may persist in downwind areas.

Around fissure 8, thick accumulations of tephra hide underground hazards such as holes and cracks; winds can pick up glassy fragments including Pele’s hair and carry them downwind.

At the LERZ ocean entry, laze and lava delta collapses remain a concern. Hydrovolcanic explosions may still occur during collapses of lava deltas in areas where the coastline has extended.

At the summit, rockfalls and ground cracking can still occur with no warning. Steep crater walls destabilized by months of earthquakes could be prone to collapse for weeks or months to come, even without further ground shaking.

Resuspended ash in the summit region and Pele’s hair in the LERZ remain a local hazard during strong winds.

As the summit continues to adjust to recent changes, additional, and potentially damaging, earthquakes are possible. Hawai’i is known for frequent earthquakes, so all residents should always be prepared for damaging earthquakes.

If the Kīlauea eruption in the LERZ does resume in the coming days, we expect, but cannot guarantee, that increases in seismicity, deformation, and/or gas emissions will provide advance warning. Activity could resume quickly and residents in the LERZ should be prepared to self-evacuate. Resupply of magma to the LERZ could lead to new areas being inundated by lava.

At Kīlauea’s summit, further draining of the magma reservoir could produce more collapse events. Alternatively, resupply of magma to the summit reservoir could lead to hydrovolcanic explosions, or, to the reappearance of lava in the caldera.

The Hawaiian Volcano Observatory said scientists “will continue to closely monitor Kīlauea’s seismicity, deformation, and gas emissions for any sign of reactivation, and maintain visual surveillance of the summit and LERZ.” USGS will also continue to issue daily updates and additional messages, as needed.