PUʻU MAKAʻALA NATURAL AREA RESERVE, Hawaiʻi - Recently, two females and three males were released from a location within the reserve. But first, they prepared for an encounter with the ʻio. 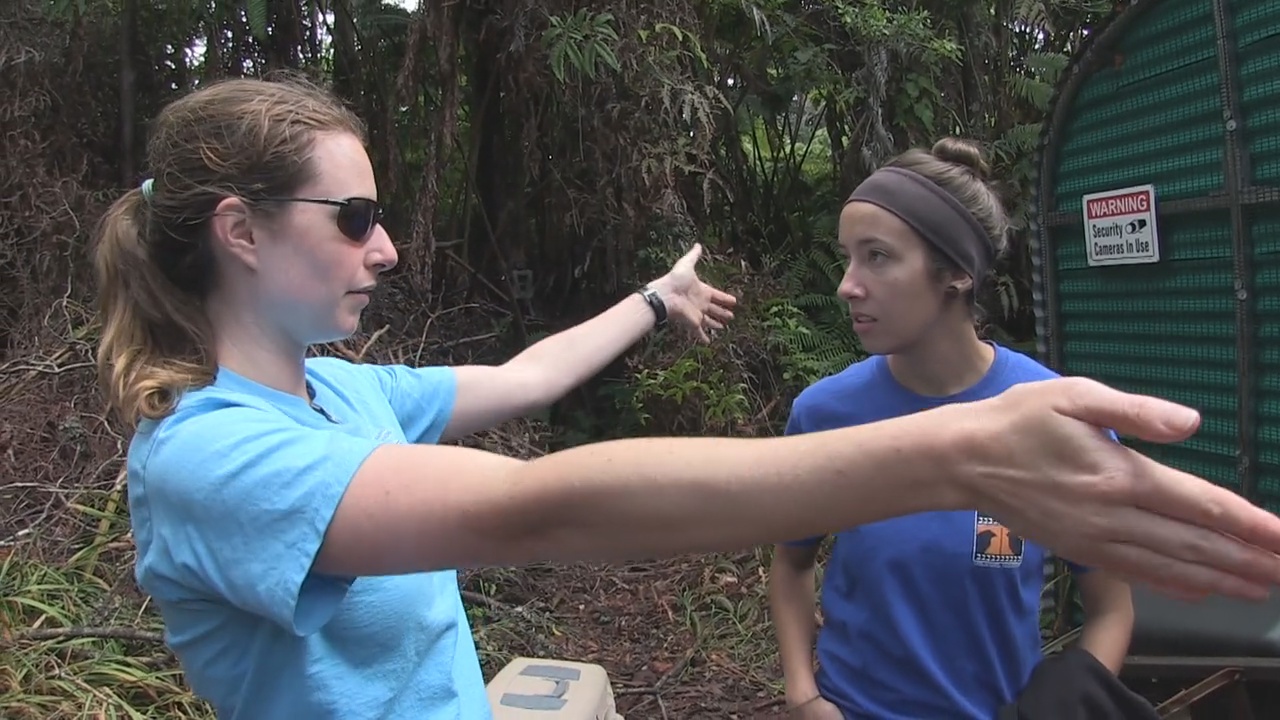 The ʻAlalā Project team prepares for a round of predator training. (Image from DLNR video)

(BIVN) – Five more ‘Alalā were released into the Pu‘u Maka‘ala Natural Area Reserve on September 24. They are joining 11 other Hawaiʻian crows already thriving in the native forest.

In October, another five birds will be released to make a total of ten in this cohort, the Hawaiʻi Department of Land and Natural Resources says. The birds will join the other ʻAlalā that have already been released across the reserve. Prior to these releases, the last wild ʻAlalā were seen in South Kona more than 15 years ago.

The DLNR recorded video showing the release of the endangered crows, and shared this information:

After the opening of the release aviary doors it took 53 minutes for the first bird to finally venture outside. All but the last one flew. It strolled out and quickly joined the others already exploring their new home.

The eleven birds released in 2017 have had a challenging year. Their survival skills were tested through multiple storms including Hurricane Lane, the Kīlauea and Lower East Rift Zone eruptions, and as always seasonal weather patterns. As five new birds join them in the forest, their daily routines continue: foraging on native fruits, eating insects from the bark of trees and agley flying through the ʻōhiʻa-dominated forest.

On the day of the bird’s release, an oli, or chant, was offered by members of the ʻAlalā Working Group, honoring the beginning of another chapter of the species’ recovery. Last April, each of these birds was given a Hawaiian name by local school students and the community. Ulu (to grow or inspire), Kūʻokoʻa (freedom), Maikaʻiloa (good fortune), Aumoamoa (to care for), and Kaleo (the voice), are the names of the birds in the first group released this year. “These names hold meaning for the individual birds. Having the students and community working together provides a way for connections to be formed with each other, as well as to the conservation work we are doing” said Rachel Kingsley, Education and Outreach Associate for The ʻAlalā Project.

The ʻAlalā underwent predator training before their release, so the crows know what to do in case they encounter a Hawaiian hawk, or ʻio, in the forest.

A few weeks before the release, the project team shared video of the training process and issued this detailed media release:

Anyone close to a flight aviary in the Pu‘u Maka‘āla Natural Area Reserve (NAR) recently would surely have wondered about all the ruckus. The distinctive calls of the ʻAlalā (native Hawaiian crows) fill the air, along with the screech of Kapono, the Panaʻewa Rainforest Zoo’s resident ‘Io (native Hawaiian hawk).

Prior to the start of the anti-predator training, a team of a half dozen staff from The ʻAlalā Project, gathered to get instructions from the zoo’s Dr. Alison Greggor. She handed out assignments, which included videotaping the birds’ activity and commenting on ʻAlalā behaviors during the introduction of ‘Io sounds and sights into their flight aviary. Greggor explained, “We will look at the videos to see how individual birds and the cohort respond to the audio and visual stimuli…we want to be certain no bird is left behind.”

Scientists have found that many animals, including the ʻAlalā, don’t recognize their predators if they don’t have anyone to learn from. According to Greggor, “These birds, raised in captivity, have never encountered predators in the wild, or had the chance to learn from their parents or their peers about the dangerous predators in their own backyards. We provide that learning opportunity by mimicking biologically relevant scenarios that they’d get had they been born in the wild.”

The predator aversion training lasts for less than 25 minutes. With the observers having synchornized their watches or cell phones the observation period begins. Initial observations depict how the birds act before any of the stimuli are presented. At the 18-minute mark the action begins when the birds hear the recorded screech of an ‘Io, as a stuffed ‘Io attached to a pulley system “flies” over the open-air roof of the flight aviary. Jackie Gaudioso-Levita, The ʻAlalā Project coordinator and a wildlife biologist with DLNR/DOFAW, cut the string beginning the stuffed ‘Io fly-over. She remarked, “Predatory events have sights, sounds, and cues coming from different directions…so we try and mimic all of those components together.”

Next the team plays ʻAlalā alarm calls. Greggor explained, “The alarm calls communicate, danger, danger, danger. While the recording plays we present Kapono in a side chamber of the aviary. He flaps his wings and then we start playing distress calls that go from the danger alert to help me, help me, help me. At that point, a stuffed American Crow is put under the ‘Io’s feet so we complete the full picture from the approach of a predator to a full-on perceived attack.”

Predator recognition and aversion are tactics that have been utilized by other reintroduction efforts, especially those in which captive individuals are released, without knowing any predatory threats. To get the best response from the ʻAlalā, team members worked cooperatively with reintroduction experts Tom White of U.S. Fish and Wildlife Service and Debra Shier of San Diego Zoo Global to develop a sequence of stimuli..“We wanted an experience that would instill in those birds a very real fear and recognition of a deadly predator,” says Tom White, a wildlife biologist with the U.S. Fish and Wildlife Service’s Puerto Rican Parrot Recovery Program.

Project team members feel very fortunate to have Kapono from the Pana‘ewa Rainforest Zoo. The ‘Io is glove-trained, and this allows the best mimic of a natural predatory scenario without any actual hurt to the birds. In addition to Kapono, the stuffed ‘Io was loaned to the project from the Bernice Pauahi Bishop Museum in Honolulu, while the stuffed American Crow was gifted to the project from the Yale Peabody Museum of Natural History, over 5,000 miles away. Gaudioso-Levita commented, “Between the collection of props, live and recorded stimuli, and advice from experts afar, training the ‘Alalā is a concerted and innovative collaborative effort.” 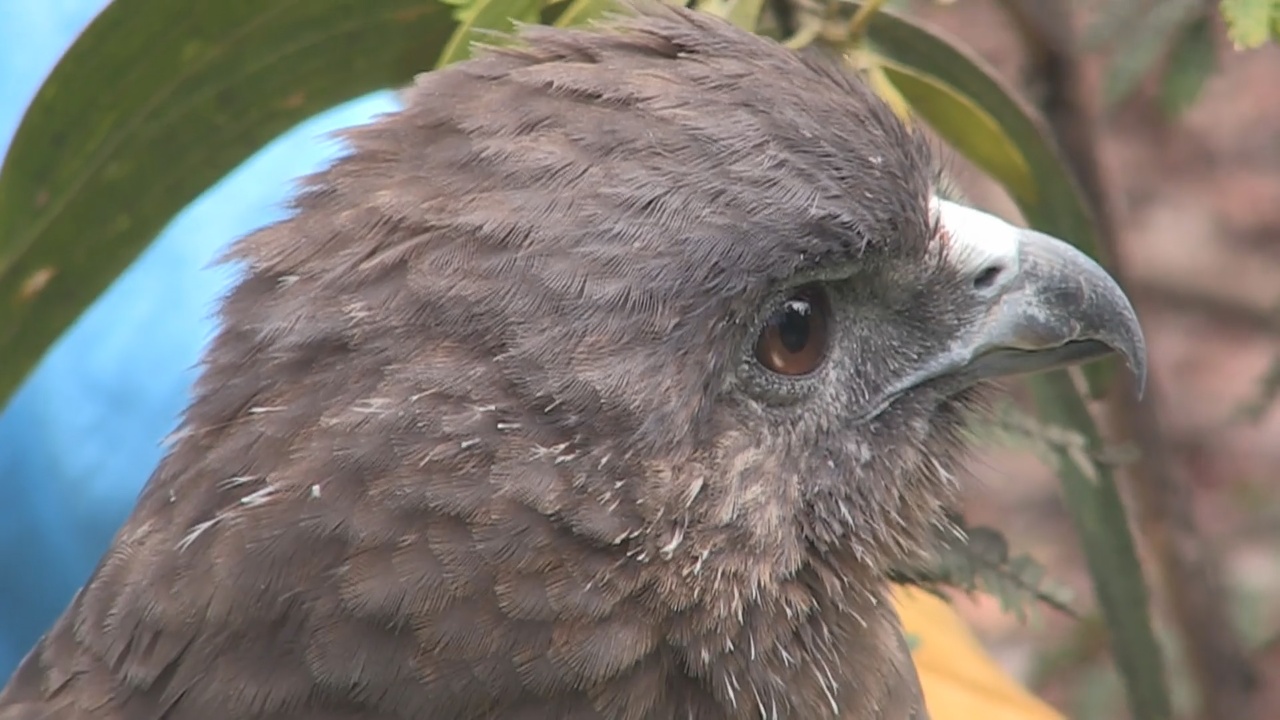 “Hearing the voices of the ʻAlalā and seeing them forage in their native habitat after being gone for so long is an incredible feeling,” said Bryce Masuda, Program Manager from the San Diego Zoo Global’s (SDZG) Hawai‘i Endangered Bird Conservation Program (HEBCP), in the media release. “It is a testament to the resiliency of the birds and the dedication of so many incredible partners that we have come so far.”

The ʻAlalā Project is a partnership between the State of Hawaiʻi, the U.S. Fish and Wildlife Service and San Diego Zoo Global. Cooperative partners include Kamehameha Schools, Three Mountain Alliance, U.S. Geological Survey, and the National Park Service.