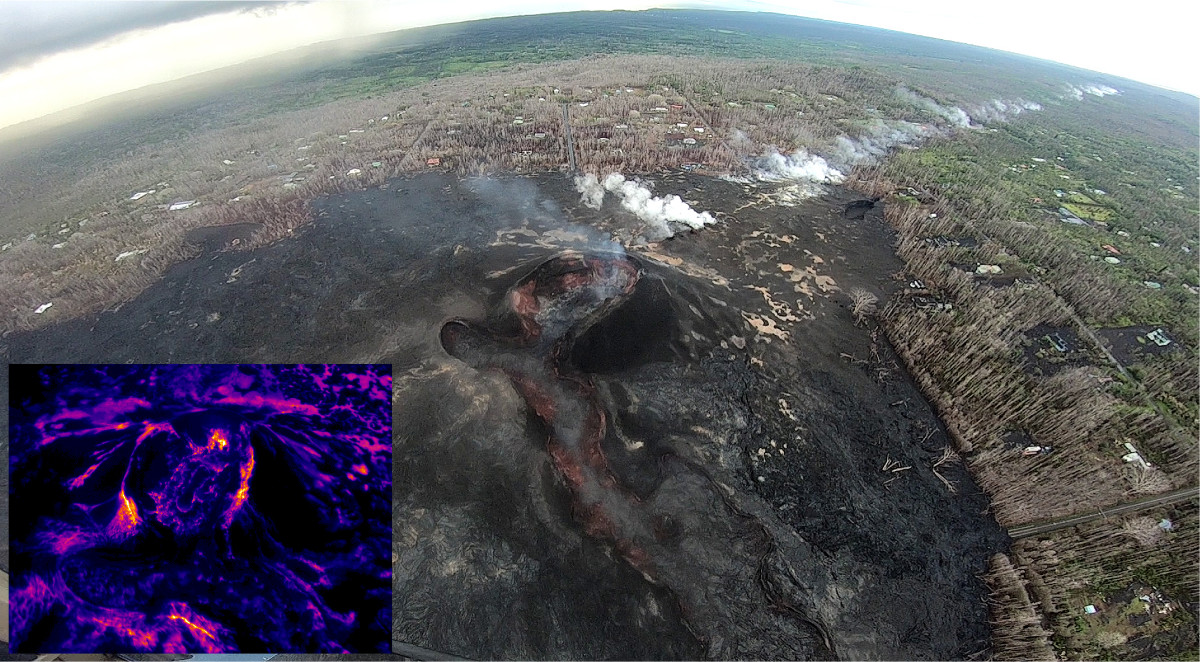 USGS: This wide-angle photo shows the fissure 8 cone (center of image) and the long line of steaming areas extending uprift (west), towards the upper right corner of the image. No significant change was observed at fissure 8 during today's overflight. Thermal images (see inset lower left) show no signs of lava within the cone - the small collapse pit in the center of the crater floor is cold.

For the first time in decades, the Kīlauea Volcano Alert Level is now YELLOW/ADVISORY, down from the previous ORANGE/WATCH designation. 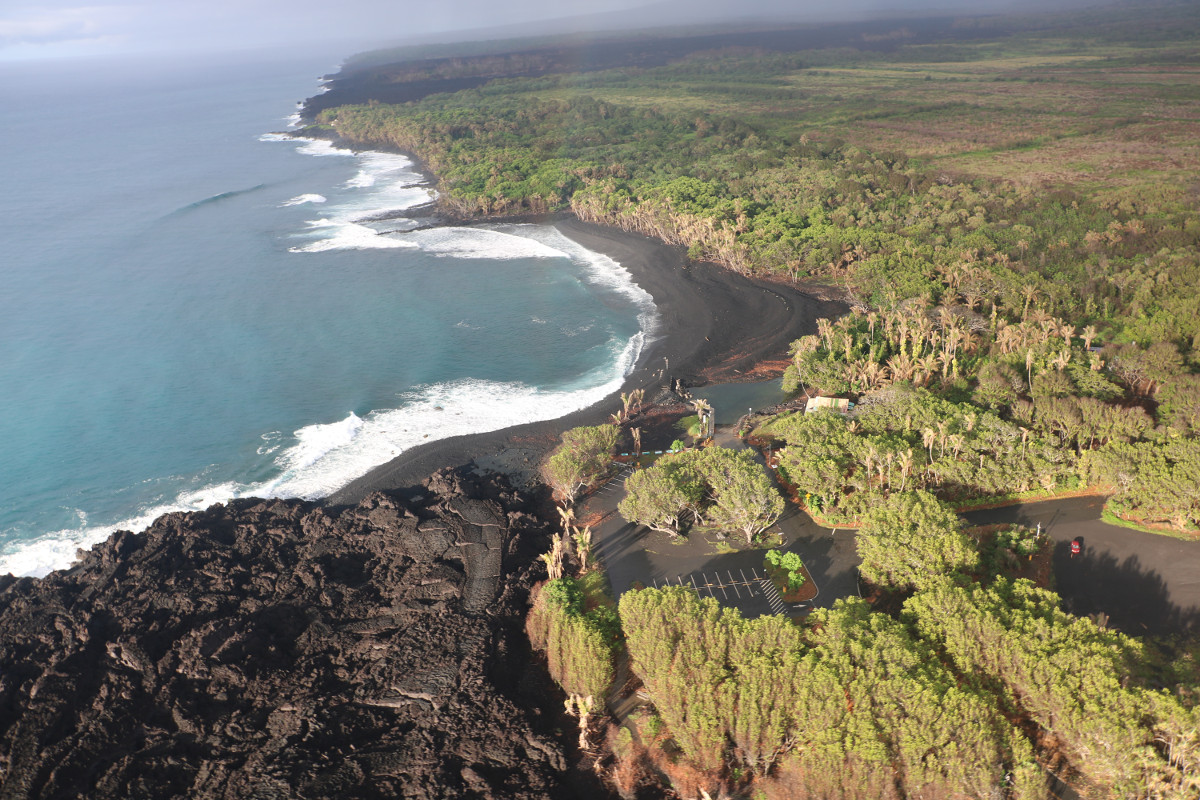 USGS: A large black sand beach remains at Pohoiki. The sand continues to block access to the boat ramp, which is just to the right of the center of the photo. The thick fissure 8 lava flows can be seen in the lower left portion of the image.

(BIVN) – The USGS Hawaiian Volcano Observatory on Friday announced the Volcano Alert Level for Kīlauea has been lowered to YELLOW/ADVISORY, with no active lava in sight.

The news of the new designation comes as a relief to eruption ravaged Puna on Hawaiʻi Island, which has been bracing for another wave of volcanic activity on the lower East Rift Zone ever since the destructive phase of the eruption, which began on May 3, went suddenly quiet in August.

“It has been 30 days since lava has been active at the surface of Kīlauea Volcano,” the USGS Hawaiian Volcano Observatory said in a new Volcanic Activity Notice. “HVO monitoring shows low rates of seismicity, steady, relatively low rates of deformation across the volcano, and only minor gas emission at the summit and East Rift Zone (ERZ). These observations indicate that resumption of eruption or summit collapse is unlikely in the near-term.”

The scientists have lowered the Volcano Alert Level for ground based hazards from WATCH to ADVISORY, which means volcanic activity has decreased significantly but continues to be closely monitored for renewed activity. The Aviation Color Code, a system of ranked colors to inform the aviation sector about airborne ash hazards, has also been lowered from ORANGE to YELLOW.

“Hazards are still present in the lower East Rift Zone (LERZ) eruption area and at the Kīlauea summit,” the USGS said. “Residents and visitors near recently active fissures and lava flows should stay informed, heed Hawaii County Civil Defense warnings, and be prepared, if necessary, to self-evacuate in the unlikely event of renewed activity. Please note that Hawaii County maintains a closure of the entire flow field and the vents and prohibits access to the area unless authorized through Civil Defense.” 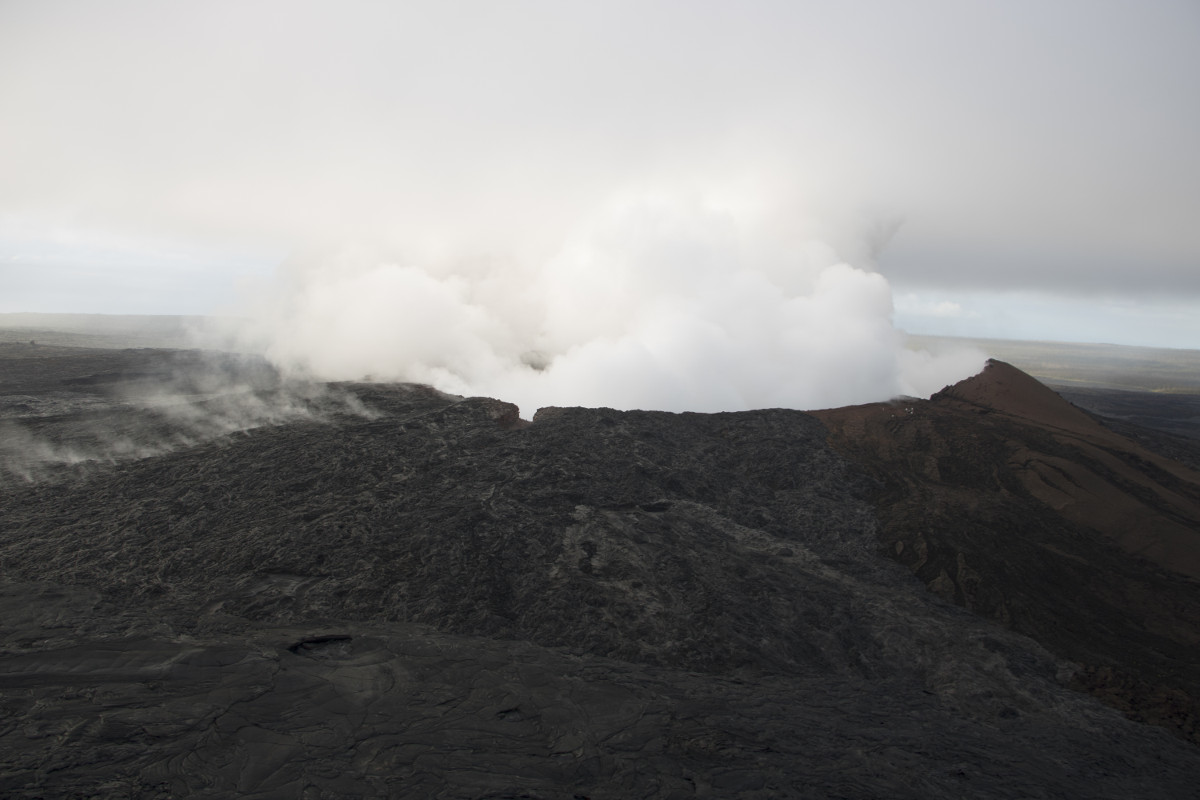 USGS: A thick plume obscured views into Pu‘u ‘Ō‘ō’s crater with the naked eye today, but thermal images were able to see into the deep parts of the crater. The bottom of the crater appears to still be covered in collapse rubble – there were no signs of any hot material.

The change also means that HVO will discontinue daily Kīlauea updates, and will instead issue weekly updates on Tuesdays until further notice. “If volcano activity increases, we will elevate the Alert Level for Kīlauea,” the scientists said.

Kīlauea Volcano has maintained a low level of activity over the past two months. The last summit collapse was on August 2, 2018. High rates of seismicity and deflationary deformation at the summit stopped abruptly on August 4, coincident with cessation of major eruptive activity in the LERZ. Lava ceased flowing in the upper portion of the fissure 8 channel system by August 6, and ocean entries were inactive in late August. Active lava was last seen inside the fissure 8 cone on September 5. The total sulfur dioxide (SO2) emission rate from the summit, Puʻu ʻŌʻō, and LERZ fissure vents combined is currently less than 300 tonnes per day.

Seismicity remains low across the volcano. Ground deformation continues, but at rates well below those during the period of major eruptive activity this summer. An exception is within the middle East Rift Zone where data show evidence of reinflation between Puʻu ʻŌʻō and Highway 130. One interpretation of this signal is that the rift zone is refilling with magma following withdrawal during the 2018 eruption. An increase in this refilling rate or other change could result in new eruptive vents along any portion of the East Rift Zone.

While it is impossible to say with certainty what Kīlauea will do next, current monitoring data do not suggest a return to eruptive activity or summit collapse in the near term. HVO continues to closely monitor incoming geologic, seismic, deformation, and gas data for evidence of significant magma shallowing or pressurization that could mean the system was building toward renewed activity.

This change in activity marks the first time since 1986 that lava has not been active at Kīlauea’s surface for a period of 30 or more days (The last long pause was 48.5 days between episodes 39 and 40 of the Puʻu ʻŌʻō eruption.) In the past 200 years, the volcano has experienced periods of quiet ranging from months to years with no eruptive activity. However, Kīlauea is one of the most active volcanoes in the world, and additional eruptions will occur. Residents should remain informed of the volcano’s status and learn about long-term hazards. For more information please see the HVO web site.

Despite the diminished activity on Kīlauea, hazardous conditions remain in the ERZ and at the summit of the volcano.

The LERZ and Puʻu ʻŌʻō lava flow fields include large areas of still-hot, rugged, extremely sharp, and unstable lava surfaces that are subject to collapse.

SO2 gas emissions have greatly decreased from LERZ vents to a level below instrumental detection. However, local concentrations of SO2 or H2S may persist and are still reported in downwind areas,and residents may from time to time notice odors of these gasses. Hot cracks degassing at low levels are especially common just west of Highway 130 and HVO will continue to monitor these cracks for changes.

Around fissure 8, thick accumulations of tephra (fragmental volcanic debris) hide underground hazards such as holes and cracks; winds can pick up glassy and lightweight fragments including Pele’s hair and carry them downwind. Tephra can irritate eyes, skin, and respiratory systems, so prolonged exposure should be avoided.

New lava fields at the coast appear relatively stable based on a helicopter overflight on 4 October, however no intensive ground survey of the new coastline has been done. Explosions near the coastline may still occur if sudden collapses expose the hot interiors of new lava flows to cold ocean water. HVO has received no reports that such collapses and/or explosions have occurred, but mariners should operate with caution around the new coastline and contact the U.S. Coast Guard with any questions.

At the Kīlauea summit, rockfalls and ground cracking can still occur with no warning. Steep crater walls destabilized by months of earthquakes will be prone to collapse for weeks or months to come, even without further ground shaking.

As the summit continues to adjust to recent changes, additional, and potentially damaging, earthquakes are possible. Additional aftershocks from the May 4, 2018, magnitude-6.9 earthquake are expected. Hawai’i is prone to earthquakes, so everyone should be prepared for damaging ground shaking at any time.

At the summit, if significant draining of the magma reservoir resumes, more collapse events could occur. Alternatively, resupply of magma to the summit reservoir could lead to explosions or the reappearance of lava in the caldera.