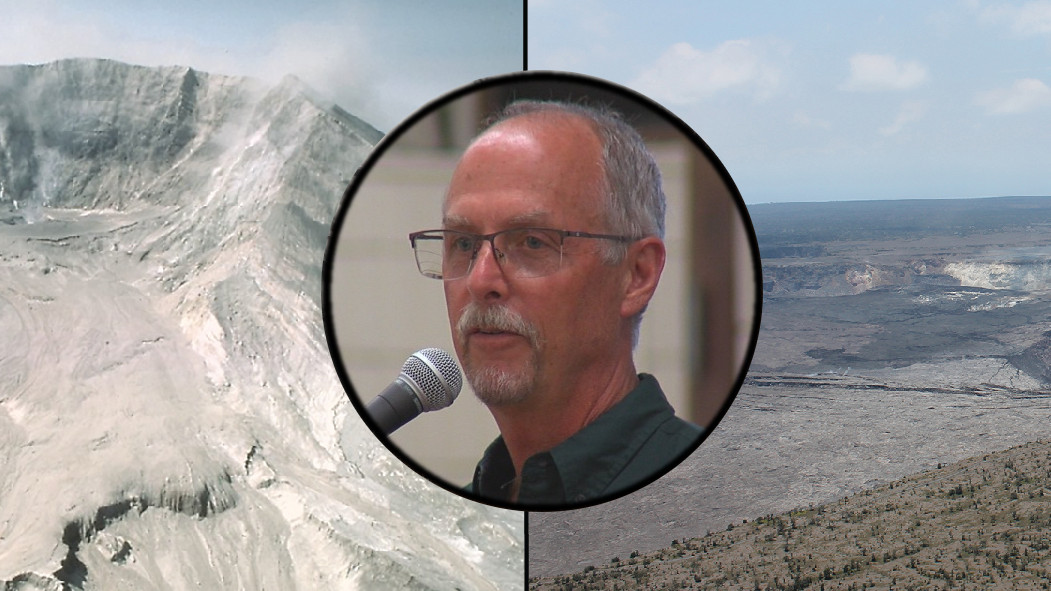 image of Steven Brantley, over Mount St. Helens and Kīlauea

HAWAIʻI ISLAND - Steven Brantley, with USGS for 37 years, will retire this month. He wrote this weekʻs Volcano Watch article, reflecting on Mount St. Helens in 1981 and Kīlauea Volcano in 2018.

(BIVN) – This week’s Volcano Watch article was written by USGS Hawaiian Volcano Observatory Deputy Scientist-in-Charge Steven Brantley, who will be ending his 37 year stint with USGS this month.

Brantley, who in the article describes the two dramatic eruptions that marked the start and finish of his career, was a familiar face in Puna – and on Big Island Video News – during Kīlauea’s lower East Rift Zone eruption that began in May 2018. Brantley often delivered the highly anticipated science presentation at the weekly eruption meetings in Pāhoa, where impacted residents would gather for the latest government information. His detailed talks were appreciated by those who watched.

Brantley’s presentations remain some of our most watched videos covering the recent eruption:

I feel privileged to have spent a long career observing volcanoes, supporting my colleagues, and striving to help people understand the potential impacts of eruptions. Upon reflection, I’m struck by the extraordinary “collapse” events that bookended my career, beginning at Mount St. Helens in 1981 and ending at Kīlauea Volcano in 2018.

It took only minutes for the top and north flank of Mount St. Helens volcano to collapse in a massive landslide on May 18, 1980. The fearsome eruption that followed led to the creation of CVO—modeled after HVO—for scientists to focus long-term investigations and keep a watchful eye on Cascade Range volcanoes.

My journey with volcanoes began there as a surveyor in the debris-clogged river valleys downstream of Mount St. Helens. Soon thereafter, I volunteered to serve as media liaison for CVO. Fifteen years later, I moved to Hawaii to coordinate and develop HVO’s website.

This month, my USGS career is ending on the heels of the collapse of Halema‘ma‘u and adjacent caldera floor at the summit of Kīlauea. The collapse occurred as an enormous outpouring of lava on the volcano’s lower East Rift Zone 40 km (25 mi) away buried more than 700 homes and 35 sq km (13.7 sq mi) of land with flows as thick as 25 m (80 ft).

Halema‘ma‘u was eventually deepened by more than 500 m (1,600 ft) and widened (east-west) by 1.8 km (1.1 mi), equivalent to a volume loss of 0.9 cu km (1.2 billion cu yds). As magma drained from the summit reservoir, the overlying crater floor collapsed piecemeal more than 60 times, dropping more than 2 m (6.5 ft) with each event. Each of these collapses released energy equivalent to that of a magnitude-5 earthquake.

Many eruptions in the U.S. and abroad, some with dire consequences, spanned the volcano-collapse bookends of my career. Only four years into my work at CVO, the 1985 eruption of the Colombian volcano Nevado del Ruiz killed more than 25,000 people when lahars (volcanic mudflows) swept down several river valleys.

Thousands of people had, for many decades, unknowingly built their communities on lahar deposits from earlier eruptions of the volcano. This eventually created the dilemma faced by Colombian authorities when the volcano awakened a year before the deadly eruption: How long could evacuation of thousands of people be delayed to minimize economic upheaval and political costs of a too-early evacuation or false alarm?

This dilemma is universal for current emergency-management authorities and elected officials as increasing numbers of people live and work on the slopes of volcanoes or within areas known for potential volcanic hazards.

The dilemma also creates increasing challenges for scientists to improve their capabilities to monitor and interpret volcanic behavior so they can issue more accurate and timely warnings of eruptions and potential consequences. They must also effectively communicate the results of their work before, during, and after eruptions to raise awareness of volcano hazards to an increasingly interested and demanding media and public.

There have been many successful responses to sudden periods of volcanic unrest since the Nevado del Ruiz tragedy. Two eruptions stand out for me because bold actions taken by officials and scientists saved thousands of lives: Mount Pinatubo, Philippines, in 1990, and Mount Merapi, Indonesia, in 2010. Many USGS colleagues were directly involved in helping scientists in both countries.

USGS work on volcanoes, primarily in the U.S. but also abroad, is possible because of the long-term public investment in our Nation’s five volcano observatories. The ever-growing knowledge and experience of observatory personnel with different volcanoes and types of eruptions are invaluable for helping to prevent future volcano emergencies from becoming volcanic disasters.

I bid a fond farewell to my colleagues at HVO and the other four U.S. volcano observatories, as well as other volcano scientists, emergency professionals, educators, land managers, naturalists, and media with whom I’ve had the pleasure of working. And to everyone in Hawaiʻi who has supported and challenged HVO and participated in dozens of community meetings during the past few years, mahalo nui loa (many thanks) for your sincerest aloha!