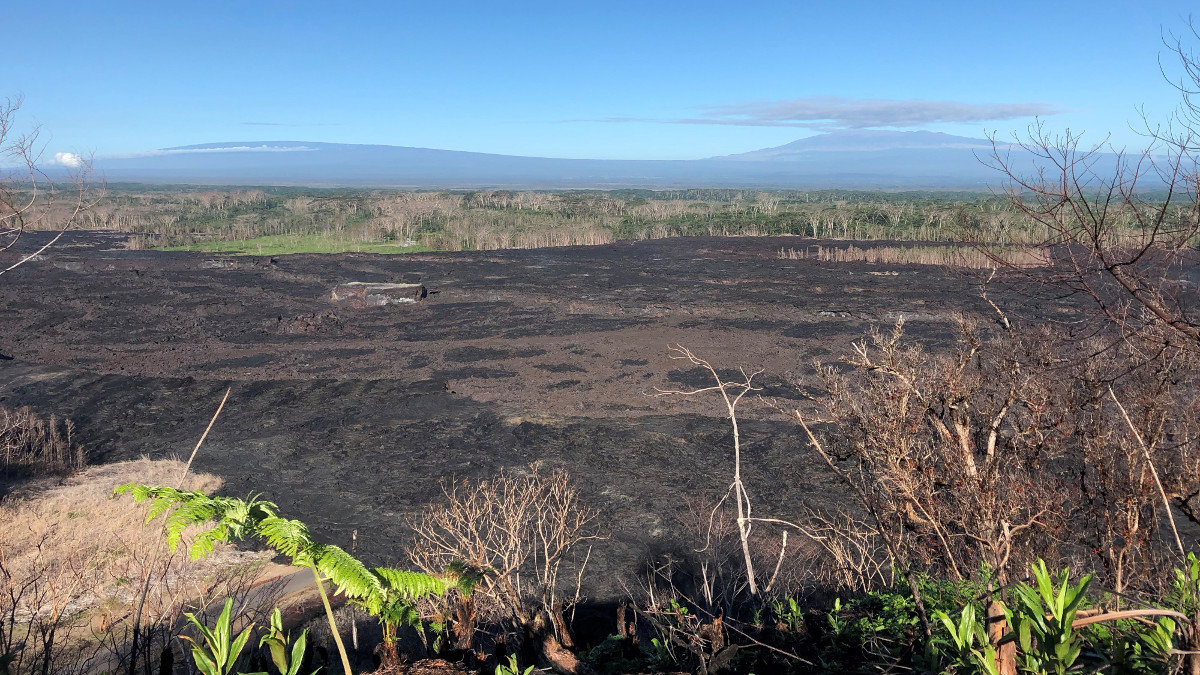 USGS photo, posted Oct. 15, looking across the field of lava erupted from Kīlauea's lower East Rift Zone this past summer, the shield-shaped profiles of Mauna Loa (left) and Mauna Kea (right) can be clearly seen in the far distance.

HAWAIʻI ISLAND - The ash leachates are generally acidic, and could irritate eyes and skin, and corrode metal roofing or pipes, the USGS reported.

(BIVN) – A new data release posted to the United States Geological Survey website delves into volcanic ash leachate, catchment and rainwater chemistry from the increased activity of Kīlauea Volcano in 2018.

The ash leachates – which increased this summer during the eruption that began in May – are generally acidic, which could irritate eyes and skin, and corrode metal roofing or pipes, the scientists said.

Presently, Kilauea Volcano is not erupting. Rates of seismicity, deformation, and sulfur dioxide gas emissions are low and have not changed significantly in the past week, scientists reported on October 9. Low sulfur dioxide gas emissions on Kīlauea have resulted in greatly diminished vog on Hawaiʻi Island, “giving rise to spectacular views on the island”, the USGS Hawaiian Volcano Observatory wrote in an image post Monday.

HVO scientists are only posting Kīlauea activity updates once per week now that the Volcano Alert Level has dropped from a WATCH to an ADVISORY. However, new products reviewing the recent volcanic activity continue to be published to the USGS website.

The new leachate data were “obtained to aid local health, environmental, and agricultural support agencies in their evaluation of potential hazards posed by the increase in volcanic ashfall” during the eruption, the USGS says. “These data are preliminary and eruption monitoring is ongoing.”

From the Summary of the USGS product:

In early May 2018, activity at Kīlauea volcano, Hawaii, increased, with heightened ash production from the summit commencing on May 17. Volcanic ash can scavenge volatile components from volcanic plumes, resulting in the deposition of potentially harmful elements during ash fallout. Leaching of these species (e.g., by rainfall or in water catchment systems) can have implications for agriculture, water resources and human health.

The U.S. Geological Survey (USGS) is sampling volcanic ash and utilizing ash leachate analyses as part of the assessment of hazards from the ongoing eruption of Kīlauea Volcano. We acquired 30 ash samples erupted from the summit of Kīlauea Volcano and collected downwind between May 10 and May 28. The samples were collected by either USGS scientists or citizens who live in areas experiencing ashfall. Care was taken to source both proximal (<0.1 km) and distal samples (up to ~45 km from the summit) to evaluate whether the potential hazard changes with distance.

The concentrations of leachable elements reported herein are only an indication of hazard. It is important that other sampling be performed to determine impact; for example, soil sampling, surface and drinking waters sampling, forage sampling, etc. To this end, we collected samples from open water supplies (catchments, troughs) near three different ash sampling locations as comparisons for impact considerations, as well as six rain water samples from the Lower East Rift Zone to quantify the potential for volcanic emissions to affect rain water chemistry and, therefore, catchment water quality.

Leachate analyses were conducted following procedures described in an internationally ratified protocol for volcanic ash (Stewart and others, 2013) using deionized water and an ash to leachant ratio of 1:100. The full methods are available in Stewart and others (2013). The pH and specific conductance of leachates were measured, and the concentrations of major anions and cations were quantified using ion chromatography (IC) and inductively coupled plasma optical emission spectrometry (ICP-OES), respectively. One in every five samples was run in duplicate as a check for consistency and is indicated by the designation (2) in the sample name. Leachate data are presented as milligrams of the leachable component per kilogram of ash (mg/kg). Water samples were analyzed undiluted by IC and ICP-OES and the data are presented as milligrams per liter (mg/L).

The pH values of the analyzed ash leachates are generally acidic (pH ~4-5), which indicates the potential for irritation of the eyes, mucous membranes and skin, as well as the potential to corrode metal roofing or pipes. The specific conductance values are high relative to previously reported values for volcanic ash globally, indicating the potential for disruption to electricity transmission systems (flashover on insulators) if there is a few millimeters thickness of ash that becomes wet (e.g., from light rain). For leachable elements, concentrations are generally high compared to ash from other volcanic eruptions worldwide (see Ayris & Delmelle, 2012); however, samples from basaltic eruptions are poorly represented in the global dataset and so comparisons should be made with caution. The high concentrations of Ca and SO4 measured in ash leachates derive from abundant, soluble calcium sulfate phases (gypsum, anhydrite) in the ash. Elevated concentrations of Zn in many samples may reflect contamination from collection surfaces (e.g., galvanized metal). In the water samples, concentrations of aluminum (Al), manganese (Mn) and zinc (Zn) are elevated relative to the maximum contaminant levels (MCL) defined by the Environmental Protection Agency (EPA). For health and safety reasons, the Hawaii Department of Health does not recommend using catchment water for drinking or preparing food, and comparison to EPA MCLs is used here solely as a convenient benchmark for considering potential impacts.