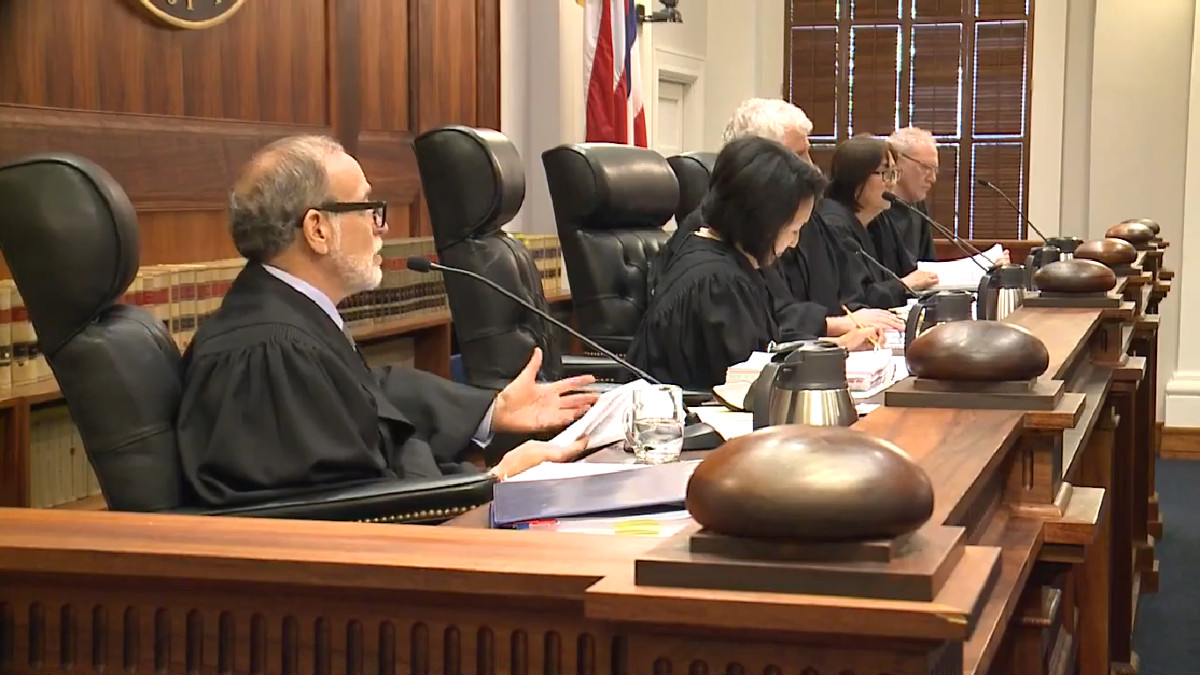 (BIVN) – The Chief Election Officer must issue a public proclamation stating that the controversial “con am” ballot question is invalid, the Hawaiʻi Supreme Court ruled on Friday, in an order granting pre-election relief requested by the state’s four counties.

The constitutional amendment ballot question read: Shall the legislature be authorized to establish, as provided by law, a surcharge on investment real property to be used to support public education?

Hawaiʻi County joined the City and County of Honoulu, Maui County, and Kauaʻi County in filing the September 26 petition for extraordinary writ seeking pre-election relief, against the State of Hawaiʻi and Scott Nago in his capacity as Chief Election Officer. The counties argued that the ballot question is “unclear and misleading”, in violation of Hawaii Revised Statutes (HRS) § 11-118.5 (2011), which – according to the Hawaiʻi Supreme Court – provides in relevant part, “The language and meaning of a constitutional amendment shall be clear and it shall be neither misleading nor deceptive.”

In its order, the Hawaiʻi Supreme Court stated:

The proposed constitutional amendments to article VIII, section 3 and article X, section 1 of the Hawai‘i Constitution would provide that the exclusive authority of the counties over functions, powers and duties relating to the taxation of real property be amended to also authorize the state legislature to impose a “surcharge on investment real property” to support public education. The ballot question as written does not comply with the requirements of HRS § 11-118.5 that the language and meaning of the ballot question be clear and not misleading.

The ballot question rose out of the 2018 legislative session and would have gone to voters in November.

“It is unfortunate that the Supreme Court is not allowing the public to vote on this question after the Legislature vetted it over the past two years,” said House of Representatives Speaker Scott Saiki, responding to the Supreme Court decision.

“We are disappointed with the Supreme Court ruling,” said the Corey Rosenlee, President of the Hawaii State Teachers Association. “This has been a multi-year fight to fund our schools and get the constitutional amendment proposal on the ballot.”

“While we are sad about the ruling, there is still an urgent need that students have qualified teachers and sufficient school funding to provide our keiki with the learning environment they deserve,” Rosenlee added. “The fight for our schools does not end with the Supreme Court ruling; all of Hawaii must ask that our elected leaders work to ensure that our schools are properly funded.”

“The fact that the Hawaii Supreme Court invalidated the proposed amendment is good news for all Hawaii citizens who value clarity in law and responsibility in government,” said Keliʻi Akina, president of the Grassroot Institute of Hawaii, a party to an amicus brief filed in support of Hawaii’s four counties. “We joined the amicus brief because we felt the language of the proposed amendment was vague and deceptive,” Akina said. “We hope the Legislature will take this opportunity to look at other, more sustainable ways to fund education without raising taxes.”

“The Court’s ruling on the Legislature’s amendment means we must keep searching for a way to support the dedicated teachers and staff who make a difference every day in classrooms around the state,” responded Governor David Ige. “I am committed to doing just that.”

“The current situation is unacceptable,” reflected HSTA president Rosenlee. “We have more than 1,000 classrooms that lack a qualified teacher, crumbling facilities, and too many of our students are denied learning opportunities based on their special needs. We have heard throughout this campaign the loud voice of the community to improve our schools. While there might have been disagreements on the amendment itself, there is still the strong desire from our community to invest in education. As a community, we must strive to give our keiki the schools they deserve.”