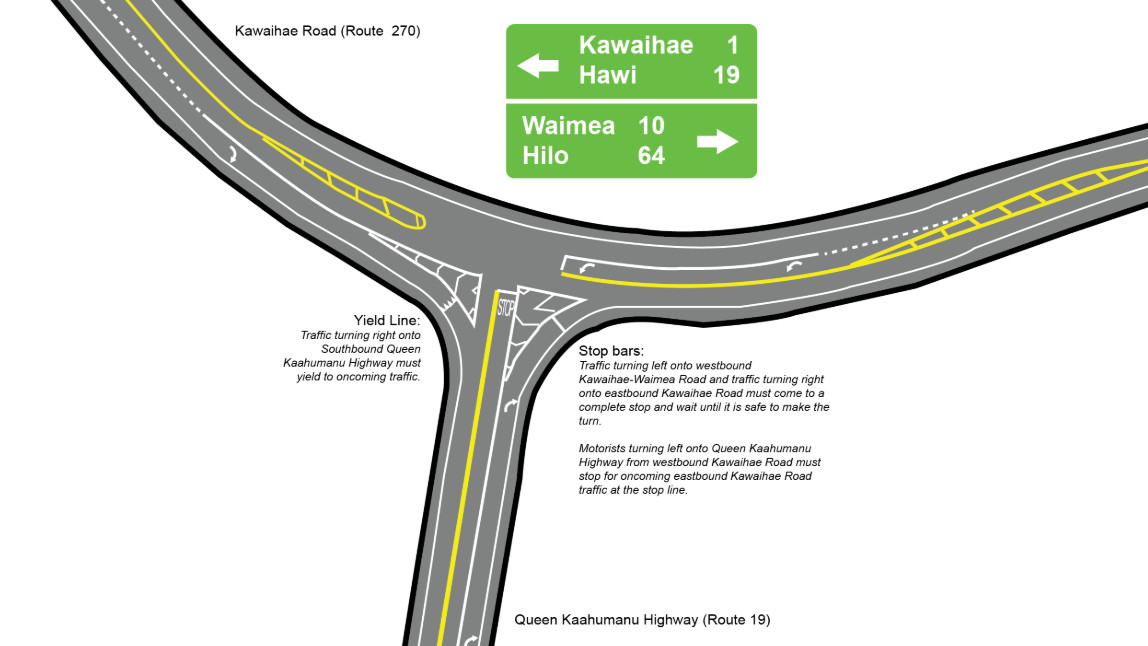 graphic provided by the Hawaiʻi Department of Transportation

KAWAIHAE, Hawaiʻi - The improvements at the busy intersection were designed to improve safety for those traveling on the critical West Hawaii routes, state officials say.

(BIVN) – The Queen Kaʻahumanu Highway and Kawaihae Road intersection improvement project is substantially completed, the Hawaiʻi Department of Transportation announced on Friday. All that remains are a few punchlist items to close out the project, but they “will be worked with minimal disruption to travel lanes and should be completed by Nov. 30, 2018,” DOT says.

The estimated the $1.5 million project was initially supposed to be completed in August 2018, but “utility relocations, lane closure restrictions, and lead times for materials resulted in a revised completion target of late 2018,” the state says.

According to the Hawaiʻi DOT:

“The improvements at the Queen Kaahumanu Highway and Kawaihae Road intersection were designed to improve safety for those traveling on these critical West Hawaii routes and we appreciate the community’s patience as we worked to deliver this project,” said Hawaii Department of Transportation Deputy Director for Highways Ed Sniffen in a media release. “The additional storage lanes will allow drivers to take their time and avoid vehicular conflicts when turning onto Kawaihae Road.”

“This was a top-of-mind project for many Kawaihae, Kohala, and Waimea residents. The widening of the intersection and addition of storage lanes should help make these crucial routes safer for people on their daily commutes,” added Senator Lorraine Inouye, who provided support for the project as chair of the Senate Transportation Committee.